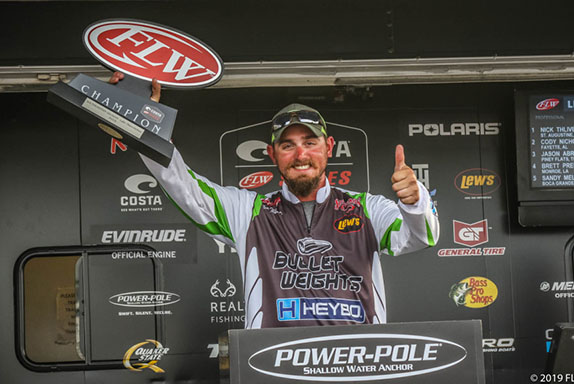 Nick Thliveros built a solid lead at the Lake Okeechobee Southeastern FLW Series by catching pre-spawn fish, but exploited some male bass on beds to seal the victory.

Rarely does a big fish caught by another competitor lead an angler to victory, but Nick Thliveros says that what happened to him at the recent Lake Okeechobee Southeastern FLW Series in Florida.

He'd started the third and final day with a lead of more than 4 pounds, but had nothing in his livewell at about 10:45 a.m. when he pulled up near Jason Abram, with whom he'd been sharing water in the Henry and J&S rim ditch and canal system. When their boats were about 20 yards apart, Abram flipped up a monstrous fish in the 9- or 10-pound class.

"He'd been 10 pounds behind me, but he made up all that ground right there," said Thliveros, the 25-year-old son of longtime tour standout Peter Thliveros. "As much of a gut punch as that was, all I could do was go over to him and say, 'Hey, give me a high-5. That was awesome.'''

Abram's bruiser and his own empty box told him he needed to make a drastic adjustment. The pre-spawn fish he'd been catching by throwing a crankbait to the bank and reeling it to them were now closer to shore and they didn't have any interest in the bait when it was practically landing on their heads.

He immediately bailed and headed for the Monkey Box, where he knew he was unlikely to catch a big sack, but had a good chance to compile the 10 to 15 pounds that would allow him to hold on for his first victory at the triple-A level. He amassed just short of 11 pounds – about 4 more than he needed to hold off runner-up Cody Nichols of Alabama.

Thliveros lives in St. Augustine, Fla., about a 3 1/2-hour drive north of the Big O. He estimates he'd visited the lake 10-12 times prior to last week's derby.

He'd finished 5th in the 2018 Series event there, which was shortened to a single day due to the drowning death of co-angler Nick Kayler. He'd hopped a jig around the rim ditch on that occasion under similar conditions – low, chilly, muddy water.

He got a few decent bites doing just that in practice. Then one day he ran into Glenn Browne, a former tour pro who also calls Florida home.

"He asked me if I'd done any good and I told him I'd gotten enough bites to know I wanted to come back," Thliveros said. He said, 'You might want to try a crankbait.' I had one on my deck, but I just hadn't picked it up.

He had one secondary locale that proved critical – a rocky place near the launch in Clewiston. He threw the crank there late on the final day of practice and popped an 8-pounder.

"That kind of sucked," he said. "I would've liked to have had that one the next day."

Thliveros caught a 5-12 specimen early on day 1 that laid the foundation for a stringer that put him in 2nd place at day's end. He caught one slightly bigger during the same timeframe the following day as he took command of the event.

His fish were 10 to 15 yards off the bank, looking toward dry ground and ready to move up for the spawn once their environment became a little more stable. That occurred on the final day, when he went keeper-less for more than 3 hours.

Arriving at the Monkey Box, where quite a few of the anglers who'd survived the top-10 cut had congregated, he saw numerous 7- to 8-pounders moving onto the beds. They weren't quite ready to be enticed by sight-fishing tactics, but that point was coming rapidly.

Their smaller male companions were willing biters, however, and he caught a few of those in the 90 minutes or so that he fished there. He then made two solid culls on his way out by launching a soft stickbait as far as he could with his trolling motor pegged on 100 power.

"If the tournament had gone on for another 3 hours, it might've been a totally different ball game," he said. "You could've seen some really big bags weighed in."

> Main factor in his success – "That final move won the tournament for me. If I'd stayed where I was and cranked all day, I don't think I could've caught 6 pounds."

> Peformance edge – "The Lew's Magnesium reel. The reason I used such a fast reel with the crankbait was so I could run the trolling motor on 40-50 and cover a lot of water, but still get the fish to react to the bait."

> Thliveros, who has aspirations of fishing at the Tour level, is a residential heating and air conditioning installer for a firm owned by fellow Series competitor Joey Thigpen. "He's a family friend and he allows me to take unpaid vacation to fish."

> He's looking forward to the other Southeastern events at Chickamauga and Santee Cooper. "This was the one I was most worried about simply because of the low water and the weather," he said. "Those fish can be very finicky and very tough to catch when they're in the transition period and it can be very deceiving from what you find in practice to what happens on tournament day. I was really just hoping to survive this tournament – I didn't want to bomb. After practice, winning was the absolute last thing I expected."