BACK
A Brand Reborn – Part 1 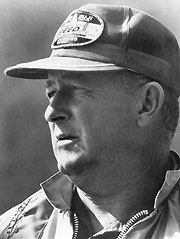 Lew Childre, founder of Lew's, forged a reputation for innovation that drove the Lew's brand to the top during the fishing revolution of the 1970s.

Editor's Note: This is part 1 of a 2-part story about the legendary Lew's fishing brand.

Fishing brands fall to the wayside with alarming regularity. Sometimes, a company bankrupts and the brand itself can't be salvaged. More commonly, brands are acquired by larger companies, then phased out to avoid in-house competition.

Champion Boats is a recent example: Its hulls are now available under the Stratos nameplate. Fenwick's another: Its rods are still available, but new-product development has seemingly slowed.

Of all the brand shutterings over the past few decades, Lew's probably stands out as the most significant, at least among the bread-and-butter tackle brands.

Founder Lew Childre pushed the boundaries on design and manufacture and built Lew's into one of the most recognizable performance brands in fishing. Anglers know that. What they might not know is how the brand began, the crucial role Childre played in fostering the Japan/U.S. tackle connection, and what happened to the brand after Childre's tragic 1977 death.

The story of the Lew's brand, in abbreviated form, began in the 1940s when Childre, who grew up along the Gulf Coast of Alabama, began to sell bait shrimp to local fishermen. The effort evolved into a small tackle shop, then into Childre's desire to manufacture a better and more consistent bamboo pole, which in turn sparked his passion to create better fishing products than any other available at the time.

His desire for a better bamboo rod led him to Japan, where he circulated among a group of manufacturers very interested in the U.S. fishing market, foremost of which was Fuji, with rod components far advanced beyond what U.S. anglers had seen. The resultant friendship and partnership with Fuji founder Mr. Omura brought the company's components into the U.S. market for the first time.

In order to build a better reel, Childre partnered with the Shimano company, which took his design concepts and created the Speed Spool BB-1 casting reel in 1973 – the first low-profile baitcaster that marked a profound departure from the round levelwinds of the day.

The timing shouldn't be forgotten. The early 1970s was an era of frequently bitter feelings from U.S. citizens toward Japan. On the one hand was Childre's father's generation, which had known Japan largely through war. On the other was Childre's generation, which also suffered war, but also saw its manufacturing base of middle-class jobs disappear as Asian imports – cars, clothes, steel, electronics, toys, appliances – swelled to previously unimaginable volumes.

Yet Childre carved out that initial relationship between Japan and the U.S. market, based on the mutual desire to improve equipment, as well as the love of fishing that both nations shared.

And with Childre's first Shimano-manufactured Speed Spool BB-1, American anglers held the latest innovations in their hands. The BB-1 revolutionized baitcasters by introducing:

Lew's then paralleled the sport during the 1970s. As fishing, and bass fishing in particular, exploded in popularity and knowledge advanced at a revolutionary pace, Lew's was identified as the brand of innovation. Childre continued to push research, development and revolution, until he was tragically killed while piloting his own seaplane in 1977.

The industry mourned the loss of Childre, while sons Craig and Casey, who'd survived the crash, inherited the brand, along with their mother Vivian (or "Bebe").

Ryobi took over manufacture of the Lew's reels, and the Childre trio would continue to push the brand until it was eventually licensed to Zebco sometime around 1989. All told, those first decades of Lew's continued to deliver innovation after innovation.

With Zebco in control of Lew's, the brand continued on and was pushed heavily through Bass Pro Shops as well as traditional distribution channels. Lew's remained a premium, sought-after brand, but things began to change when W.C. Bradley purchased Zebco in 2001. Lew's began to fade. On the one hand, Lew's did compete with in-house Zebco brands, most notably Quantum, but at the same time, Zebco didn't own the Lew's brand – it only licensed it.

Within a few years, however, a shimmer of light built on that horizon. 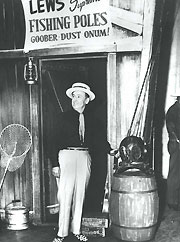 Lew Childre began his fishing career by selling bait shrimp to local Gulf Coast anglers, then opened a small tackle store, which in turn led to his quest to build a better bamboo rod.

Over a 27-year career with Bass Pro Shops, Reeves grew from a buyer to become divisional merchandise manager where he oversaw all fishing and marine products.

Reeves knew the Childre family through Bass Pro Shops, where he purchased Lew's products for catalog sale in the early '80s. Reeves was also instrumental in growing the Bass Pro Shops tackle brands, and thus enjoyed close relationships with the overseas OEM manufacturers.

But what created the possibility for Reeves to purchase and resurrect the Lew's brand started with a bit of misfortune. Reeves, now 56 years old, struggled through health issues in 2006 and elected to drop to part-time with Bass Pro Shops. He assumed a product-development role, but his position was eliminated in 2009 when Bass Pro Shops underwent a massive reorganization.

The timing was opportune. Reeves needed a new venture, knew the Childres, enjoyed relationships with key overseas manufacturers, and shared the original Lew's vision of innovation through his years of experience in product development.

Reeves purchased the Lew's brand, quickly surrounded himself with other key ex-Bass Pro Shops employees, then began his intense, focused effort to resurrect the Lew's name and tradition under the longtime Lew's slogan of Lighter, Faster, Stronger.

> Part 2 of this story will focus on Reeves – his first efforts after the Lew's purchase, where the company sits now, its pro staff, and what's in the Lew's pipeline for this year and next.

> Lew Childre's father, Lew Sr., was a celebrated Grand Ol Opry star and is a member of the Alabama Music Hall Of Fame.

> For more about Lew's, visit the official site – Lews.com.