Ehrler Bagged His Second Victory Of 2010 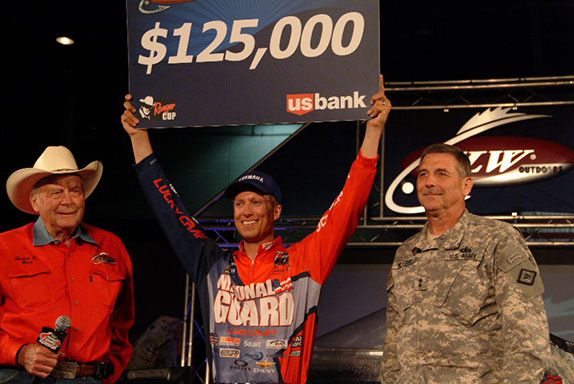 Brent Ehrler captured his second FLW Tour victory of 2010 on this date as he caught an 11-11 stringer to top the field at Lake Ouachita in Arkansas.

With a four-day total of 58-01, Ehrler beat out home-lake favorite Scott Suggs for the victory. He'd also claimed the top prize at Table Rock Lake earlier in the year. For good measure, he started the year with a win at the Lake Shasta FLW Series in his native California.

"I feel awesome – it feels amazing," he said. "It's just so hard to win one, and to have this happen, to win two, it's just crazy. It's just unreal. There's really no other way to describe it."

When he came off the water, Ehrler was mad at himself. He'd struggled all day and in the final 30 minutes decided to pull out to deeper water to see if the fish had moved out.

They had, and he culled twice within a 5-minute period to get to 11-11. He was out of fishing time and figured he'd blown it – there was no way that bag would hold up.

"The way this one went down, it was so weird – completely unexpected. Things changed up out there and it was just all so weird because I was thoroughly convinced I didn't win. I was mad at myself that I didn't get on that outside stuff until too late."

His two main baits were a Lucky Craft Gunfish 115 and a Brian's Prop Bee (a bait he threw for the first time ever on day 2 of the event).

Here’s a rundown of some other news we’ve covered over the years that we published May 22. Check back next Friday for another batch of archival content.

In his Winning Pattern article, John Cox expressed sympathy for some of the fish he took to the weigh-in stage at the Lake Chickamauga Bassmaster Eastern Open.

"A few of them I caught were in their last few days of life," he said. "I felt so bad when I'd throw them in the livewell. One of them had an eye that had exploded and it was just white with stuff growing out of it and it had the biggest cut on its belly – I don't know if it was from braid or what. I saw him just easing down the bank, looking for bluegill."

The fish was one of several that died in his livewell, costing him a 4-ounce penalty on each occasion.

"A (Berkley) MaxScent General was his last meal. That's so awful! It wasn't even something real."

Clint Brown, a resident of Bainbridge, Ga., described how he'd opted for quantity over quality en route to winning the Lake Seminole FLW Series the prior weekend on his home water. He spurned the more pressured areas around Spring Creek and opted to fish in the Flint River the entire event.

He knew he was likely forgoing a shot at bigger fish by doing so, but he found a stretch of water that would produce a higher volume of bites.

“Normally, our local tournaments are known for big bags and big fish that come from the main lake and Spring Creek,” he said. “I knew those places would get a lot of pressure so I chose to stay in the river because there’d be less pressure and it would produce more bites.

“I was trying to stay away and fish less-pressured water rather than fish for big ones on the lake. Not that I wasn’t fishing for big ones, but those 25- to 29-pound sacks come from Spring Creek and the main lake. I knew with the pressure that wasn’t going to happen this week.”

With a third of the FLW Tour season remaining, Andy Morgan was in 2nd place in the points standings and was on his way to claiming the first of this three Angler of the Year titles. As usual, he was feeling no pressure.

The only reason he knew that he was No. 2 in the points chase was because somebody had told him about it recently – he figured that his 68th-place bomb at Beaver Lake would place him considerably farther down the list. When asked to guess how many points he trailed leader Brent Ehrler by, he said, "Oh, maybe 25." The actual number was 17.

"I honestly haven't thought a whole lot about it," he said. "It'd be great to win it and if it falls that way, everything would be merry and all that. If it doesn't, it'll be another Top 10.

"I've kind of had a force field around that award – I've had a 2nd and a 4th and a 6th or whatever. Usually everything has to go completely perfect to win it and I'm kind of surprised I still have a shot after that horrible Beaver event, but I guess this is just one of those years where everybody's going to have a bad one."

The biggest victory of Jim Milson's career occurred in a tournament that he almost had to bow out of.

Two days before the start of the Lake Amistad Texas FLW Series, the 58-year-old flew home to Odessa from Del Rio on a friend's private plane when word came that his ailing mother-in-law might not make it through the night. Her condition stabilized that evening, however, and improved the following day, and he was back at the lake for the final few hours of practice.

The return trip had given him time to think about what was going on at the big lake on the Texas/Mexico border and he capitalized on the short time window that remained to finally get on some quality fish. He went to weigh an average of a little more than 17 pounds over the 3 competition days and his 52-02 total beat out runner-up Russell Cecil by a couple of pounds and some change.