BACK
Conversations With A Genius (Cont.) 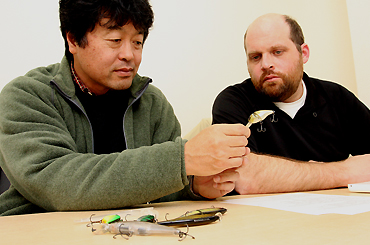 (Editor's note: BassFan's Jon Storm recently spent a week in Japan and writes of the experience in this continuing series. Below is part 2 of a 2-part article about famed lure designer Seiji Kato. To read part 1, click here.)

As I mentioned yesterday in part 1 of this story, I had the opportunity while in Japan to conduct a formal interview with master lure designer Seiji Kato

The interview appears below, but note that it reads somewhat rough. That's because Kato's English is quite limited. I relied on interpreter Yasutaka Ogasawara, whose English is good but by no means perfect.

My goal was simple: To get the facts of Kato's career recorded in English for the first time.

Then you worked for Daiwa soon after college?

Where did you learn to fish?

When I was young, my father would take me fishing. Freshwater, domestic fish. Then I started bass fishing in high school. Nobody fished for bass in my high school.

Can you tell me about your time at Daiwa and the TD Minnow?

For the first 5 years I worked in the sales division. Then I was thinking, Daiwa was making some lures, but I wanted another one for a tournament. I asked the company if I could design a lure and the company said okay, you can design if you want.

Just after 1991, I drew the shape of the TD Minnow and I said to the carving section, 'I want this shape.' After that I was doing everything myself. So I was just drawing until 1991, then hand-carving with a knife and doing everything after that. In 1996 I went to designing on a computer.

Why did you leave Daiwa?

The TD minnow was a big seller, but the Daiwa company said "stop the new projects" because the TD Minnow is still a big seller. And they said, "Okay Kato, you have to make ocean-fishing lures, or other products." But I wanted to make bass lures.

When I quit Daiwa, Lucky Craft was not a company. It was made just for a new stage. Mr. Iwaki made Lucky Craft as a present for me – as a new stage for my designs.

Did you have the ideas for your first Lucky Craft products while still at Daiwa?

Yes, I already had lots of ideas, but Daiwa didn't want to make them.

For historical accuracy, the TD Minnow had a weight-transfer system, but that was not the first lure to have one, right?

Daiwa has a patent. I was the innovator of one of the kinds of weight-transfer. The TD minnow was not the first to have it. The first was the K-Ten Minnow from K-Ten Lures. It was used for the ocean. 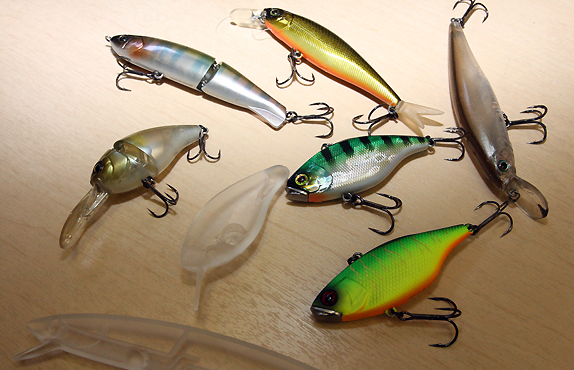 
Some of Kato's best-known Jackall baits, along with two clear-plastic prototype cross-sections.

Were you excited when you left Daiwa and started with Lucky Craft?

Yes. It was a wonderful time, because now I could make everything I wanted.

And when did Lucky Craft first come to the United States?

In 1997 we started an office in the United States. I was president of the U.S. office.

And if memory serves, shortly after that was when the Pointer Minnow first started to get around on the tours. Although the TD Minnow was an important bait in U.S. tournament circles, the Japanese influence really took off with the Pointer.

The pointer won a Bassmaster Invitational in the West in 1998. Dennis Hoy – he was top on the first day. The second day I fished with him. I got 11-pounds-something, and Dennis got 5-pounds-something. I gave him the Pointer for the third day and he won. He got his limit first, then he gave Ish Monroe the Pointer, and Ish finished 4th.

That was the first tournament where Americans were using the dropshot, which I taught them how to use at that tournament. But it was won with the Pointer.

(Editor's note: Invitationals at that time were pro-on-pro draw tournaments. Monroe confirmed Kato's account and noted that he was in 2nd place after day 2 with a different pattern. Monroe was then forced to fish Hoy's pattern on day 3, and caught his only two fish on the Pointer.)

Lucky Craft was about to peak in the next few years, yet you left shortly thereafter. Why?

And you immediately formed Jackall Bros.?

Yes, I made Jackall, a new company, with Ty Ono. We were friends from Daiwa when we both worked in product development. I was happy to start a new company.

Have you recently experimented with any new lure-making materials?

If I make a new product, I can only do it two ways – a change in concept, or a change in material. If I find a new material that's good for designing lures, I will use it. I am always trying to find new material.

What's your favorite lure you ever designed?

The Jackall TN60 vibration, because so many fishermen always tell me this bait is good. It's a lipless crank, but has a tungsten chin. It's a special one for innovation and material – I put many new ideas and materials into it.

Lipless cranks are very easy to hang up on the bottom if you stop reeling. But this bait stands up, so there's not as many hangups. And many shore-fishermen are using it because it's got good castability.

A difficult question, but can you describe your lure-design philosophy?

Can you name some other lure designers that you admire?

What is your favorite place to fish in America?

I like the Alabama lakes on the Tennessee River – Guntersville, Wheeler – and Champlain.


Kato keeps this stuffed Ayu on the wall near his desk. The Ayu, about the size of stream trout, is a popular and highly valued freshwater fish in Japan. This particular specimen is quite large for the species.

Does it upset you when people copy your designs?

No, I don't mind. I think it shows respect – that everybody respects my products. It's not okay of course. But the original is always the best, because you can't make a perfect copy.

How much does color matter?

Color is very, very important. But color is important for situations – each lake, weather, water color. Each situation is a little bit different.

What do you see as the next frontier in lure design?

Two things. One is material. The other is the perfect shape. If you design a lure, just a little change here or there makes a big change in (how it) swims. I try to find the best shape for each lure, but it's very difficult. The outside of the lure may look the same, but a little change to the shape inside or something and the bass will no longer bite it. You have to try to find what's best – perfect action from a perfect shape.

How important is it to you to have success in the United States with your company and lures?

America is my dream – that Americans bass fish with my lures. Bass fishing came from the U.S. Of course the business needs money, but in my mind, America is the original bass-fishing country. So if American fishermen respect me, and my lures, and like and buy my lures, I'm most happy.

It was very exciting when Kevin VanDam used the Pointer – the super-special fisherman using my lure. Even the Squirrel and many lures I designed – many famous American pros are using them. That makes me very happy.

You fished three BASS events as a co-angler in 2007, and won the Amistad Elite Series. Do you have any plans to come back to America soon?

Of course I want to fish in the United States. I want to make my lures in the United States. I want to live there and design. My dream is I want to follow each tournament and design lures right there – at each tournament. Lakes will change and each lake has many different situations. Tournament fishing is a contest to find the best answer. So I want to know what that answer is and design for it – just follow and watch and research. Watch VanDam and Iaconelli fishing, all the famous fishermen, and ask them, "What do you want for this tournament?"

There will be many answers at every tournament, but some answers will be the best. That's what I want – to make a lure at that tournament that's the answer for then. Maybe live in a mobile home and make lures right there. Have computers and molding machines in a trailer. That's my dream.

> After the conclusion of the interview, Kato requested that I stop taking notes. He then visited his office and returned with a new lure-making material that he's been experimenting with. I agreed not to discuss specifics, but it was pretty mind-blowing.

> When Kato won the co-angler division of the Amistad Elite Series in 2007, he overcame a 16-11 deficit on the final day to win. He had a 10-pounder to the boat three times but couldn't land it. If he'd have landed that fish, he would have had the heaviest stringer of the tournament among both cos and pros. He used a Jackall Flick Shake – a worm he designed with input from his pro staff. But a secret that came out after the interview was he used an "Octopus Flick-Shake." What's that? Hint: It's three wacky-rigged worms on a single hook. Watch for details on that rig, and other new and exciting Japanese techniques, in future articles.