BACK
Shot At Classic 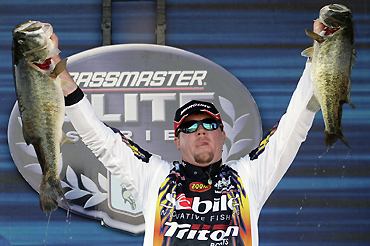 Jason Williamson's season got off to a rousing start with his victory at Amistad, and a strong finish this week at Oneida could give him his first Bassmaster Classic berth.

Jason Williamson started the 2009 Bassmaster Elite Series season with a bang. Now he hopes to finish it with one, too.

The 3rd-year pro from South Carolina won the season-opener at Texas' Lake Amistad in March, but goes into this week's finale at Oneida Lake in New York at No. 47 in the Toyota Tundra Angler of the Year (AOY) race. He needs to move up 10 places in order to nail down his first Bassmaster Classic berth, and at least six or seven spots to have a shot at a backdoor slot created by double-qualifiers from the Opens.

He plans to fish the same way he has all year – with his eyes on the top prize.

"Like it or not, this is one of those lakes where you either have to swing for the fences with largemouths, or fish deep for smallmouths knowing that smallmouths probably aren't going to win," he said. "If you can find largemouths you have a lot better chance of being in the Top 5, so I'm really concentrating my practice time on trying to figure them out.

"It'd give me a chance to win the tournament and make the Classic, so it'd be killing two birds with one stone. If all else fails, I'll fish deep for smallmouths and with a little luck, I'll get a check and maybe still make the Classic."

The 28-year-old Williamson's finishes have been all over the board this year. A 17th at Wheeler is the next-best after his victory, and those are the only two among the Top 30. At the other end, he's logged a 76th (Smith Mountain) and a 93rd (Guntersville).

He came into the season determined to go for the heaviest sack he could catch on each tournament day. He said it's a style that suits him, but one that's going to result in some low placements.

"I told myself at the beginning of the year that I was going to try to win every tournament and let the chips fall, and throughout the year I've stuck with it," he said. "I've tried to catch big bags every day – sometimes that works and sometimes it doesn't. That's the reason for the radical finishes.

"It's kind of a hardheaded way to be, but if you can walk away holding that trophy, it makes it all worth it. If you don't make the Classic but you win a tournament, you've still had a good year. But if you have a little bad luck when you're swinging for the fence, you can end up in the 70s or 80s real quick."

Last year's Elite Series stop marked Williamson's first visit to Oneida, and he finished an unsatisfying 68th. He likes the lake and thinks the experience he gained on his first trip will benefit him greatly this time around.

"It's a very enjoyable lake as far as catching fish and you have to make so many decisions," he said. "I call this a 30-rod tournament because you can go for largemouth with a frog, a Beaver, a Senko or a big jig, you can fish deep for smallmouths with a dropshot or you can go between with a spinnerbait or jerkbait, and you can catch decent fish doing all of that stuff. It's a matter of putting it all together because it fishes a lot different than anywhere else.

"You don't get very many bites with largemouths, but they seem to win. With smallmouths you get a bunch of bites, and you might catch a 4-pounder and the rest of them be a pound and a half, and then you can run around the lake fishing the same kind of stuff and not get any bites. 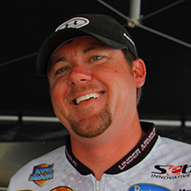