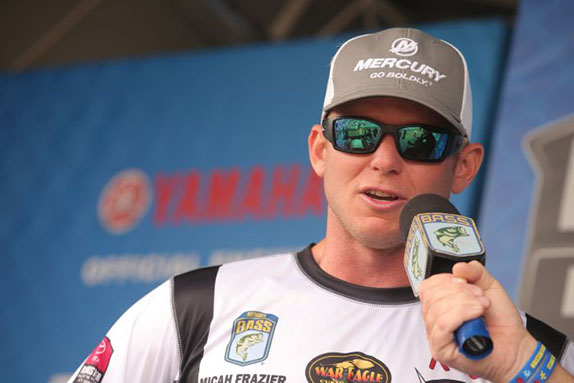 The Bassmaster Elite Series will visit the St. Lawrence River in New York this week for the fourth consecutive year and the sixth time since 2013. The playing field for this event will be slightly different, however, as the host city has been switched from Waddington to Clayton due to coronavirus-related issues.

Clayton sits about 65 miles southwest of Waddington, very near the point where the river begins at the northeastern part of Lake Ontario. Due to that proximity, the big lake will be in play for the first time since 2013, when Brandon Palaniuk made the long run there from Waddington each day en route to his first victory on the circuit. On the flip side, the fertile Canadian waters to the northeast are off limits due to the closing of the border to non-essential travel.

It's a smallmouth dominated fishery that also harbors a smattering of big largemouths, but a lot of the best green-fish locales are on the side of the border. It's also gotten a lot of pressure recently, thanks in part to the eye-popping bags of bronzebacks that have crossed the stage during recent Elite Series visits.

Judging by the WeatherChannel.com forecast, the lake should be a viable option for the first three days of the four-day event. A strong southwest wind is predicted for the final day, though, which could force the 10 competitors who advance to that point to remain in the river.

Before diving deeper into the bite, here's some intel on the venue.

> Lake name: St. Lawrence River
> Type of water: Primary drainage for the Great Lakes Basin
> Surface acres: N/A (competitors will have access to the river and the portion of Lake Ontario within New York waters)
> Primary structure/cover: Humps, points, rock piles, weed beds, sandbars, reeds, mats
> Primary forage: Gobies dominate, but crayfish and various minnows are also available
> Species: Smallmouths and largemouths
> Length limit: 12 inches
> Reputation: A formerly untapped bass fishery with prolific numbers of both smallmouths and largemouths weighing 3 pounds or more
> Weather: A mix of sun, clouds and thunderstorms. Daily high temperatures will top out in the high 70s to mid 80s with light to moderate wind
> Water temp: High 70s to low 80s
> Water visibility/color: Tinted to extremely clear, depending on location
> Water level: About a foot high and dropping
> Fish in: 2 to 50 feet
> Fish phase: Post-spawn/summer
> Primary patterns: Dropshots, tubes, crankbaits, jerkbaits, spybaits, jigs, swimbaits, topwaters, plastics
> Winning weight: 90 pounds
> Cut weight (Top 10 after 3 days): 50 pounds
> Fishing quality (1=poor, 5=great):3 for the St. Lawrence River
> Biggest factors: Finding consistent quality. The river is full of bass, but big ones can be scattered
> Biggest decision: Whether to devote any time to Lake Ontario, where the fishing is a hit-or-miss affair
> Wildcard: Largemouths – there are some big ones out there

To get a closer look at how the St. Lawrence lays out, check out the map below, courtesy of Navionics:


Ahead of the Curve

The weather has cooled off a bit in recent days, but the northeastern border region has experienced a warmer-than-normal summer this far and water temperatures in both the river and the lake have reached 80 degrees. That usually doesn't occur until sometime in August.

The spawn has been history for the past couple of weeks and more fish have moved to deeper water at an earlier date than they do in an average year. There are large congregations to be found at the 25-foot level and below, but they tend to be the 2- and 3-pounders that won't help an angler a great deal in the standings. The 4s and 5s are spread out at both extremes and everywhere in between.

"I always think these tournaments are going to be won deep, but then the shallow game always gets played and I'm surprised, so I'm going to stay both are going to factor in," said Dean Meckes, who's operated a charter service and fished competitively on the system for more than a quarter-century. "With guys being restricted to just the U.S. side and it being a couple weeks earlier in the season, I'm almost positive that fishing's going to be a little tougher than it was last year (when Micah Frazier won with an average of just under 22 pounds).

He said more quality fish are landing in their summer haunts as each day passes.

"Some bigger ones are starting to get caught, so it's coming around. I think 20 pounds is going to be pretty solid whereas maybe in the past a real good bag was 23 or 24."

He said that Ontario is definitely a viable option, but a fall-back program will be a necessity.


Lake Ontario will once again be in play for 2013 winner Brandon Palaniuk and rest of the Elite Series field.

"There's some big wads of them out on the lake; I was out there today and couldn't get it going, but that doesn't mean that one of these guys can't. The winds could really mess things up, but I personally like that because it puts more strategy in the game. If you're depending on the lake, you also have to have a backup plan in case it gets windy."

Bill Lortz of NY North Country Bassin' Guide Service said that an angler who's determined to fish shallow can make a go of it, but he believes that 25 to 35 feet will be the key depth range.

"We were out Sunday and we ran into a pod of big fish and caught the heck out of them, then we went back the next day and they were gone," he said. "A lot of fish are moving right now. You can mark a fish (on a graph) and drop down and catch a smaller one and you know it's not the one you marked. It'll take some different tactics to target the bigger fish this year.

"The numbers of big fish being caught might be a little lower than normal – the place isn't just handing out 5-pounders. You can usually run a pattern in the river, but there might be a little more junk-fishing involved this year.

A Few to Keep an Eye On

Chris and Cory Johnston – The brothers from province of Ontario have won gobs of money on the lake of the same name. It's been somewhat of an off year for both, but they could turn it all around at this one.

Seth Feider – A smallmouth ace who comes in with some momentum picked up from the South (a 4th and a 17th in the last two outings) after a rough start in the opener. Anything other than his second top-10 of the season would be somewhat of a disappointment.

Keith Combs – The Texan competed in all of the Elite Series events at the St. Lawrence and his record is stellar. He's had a good campaign thus far without advancing to the final day and could easily check that box this week.

Brandon Palaniuk – It's hard to believe that it's been seven years since his victory on this venue. He was 67th in the previous event at Lake Eufaula and would like to gain back some of that ground on this northern swing.

Daily takeoffs are scheduled for 6:45 a.m. ET at the Clayton Antique Boat Museum, with weigh-ins at the museum beginning at 3 p.m. Under guidelines from the State of New York, no in-person attendance of events is allowed. Fans can take in the action on Bassmaster LIVE at Bassmaster.com and ESPN3 beginning at 8 a.m. ET. Coverage will also be broadcast on ESPN2. Check local listings for details.