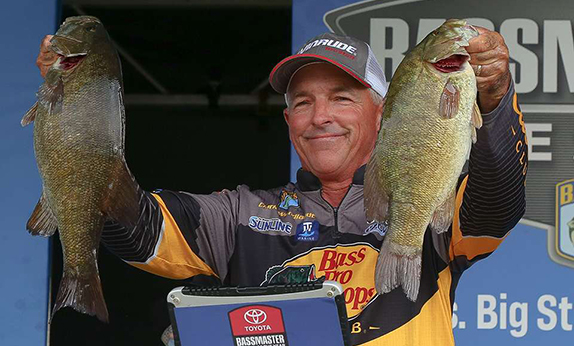 Clark Wendlandt's first pick for catching bass that have moved to deeper water is a crankbait.

It would suit Clark Wendlandt just fine if the vast majority of bass never ventured far from the banks. That's not reality, though, so every year at about this time he begins preparations to start fishing out deep as the fish move toward their summertime haunts.

"I prefer to fish shallower, but over time I've learned that you can't pound a square peg into a round hole," he said. "If they're out on the ledges or drops, that's where you've got to fish."

In lakes that feature shad as the primary forage, the veteran Texas pro says you can look to that baitfish species to determine when to move out – and how far.

"If the shad are spawning and there's a bunch of them up running the bank, the bass up there might not go deep quite as quick," he said. "That's always something to look for when determining whether you're going to fish shallow or deep.

"When the shad spawn is over, they'll usually go out very quick."

Modern electronics units make pinpointing the big shad schools a relatively simple process, Wendlandt says. And where you find them, there will be bass nearby.

"I use down view, side view, mapping and traditional sonar and I'm able to see the bait and get an idea where the majority of the activity is," he said. "It might be in 5 to 10 feet of water or 15 to 20 feet. A lot of times they'll go really deep right after the spawn, but every year is different on every lake."

His favorite way to catch bass that have followed the shad out is with a crankbait (a Strike King 5XD, 6XD or 10XD, depending on depth). He keeps many other offerings at the ready, however; the list includes football jigs, Carolina rigs, flutter spoons, Texas-rigged worms, swimbaits, dropshots and wobble-heads.

"I'll have 10 to 15 rods rigged up and I'll let the fish tell me what they want," he said. "I typically start with a crankbait, but I'll switch it up if I don't get a bite at the first couple places. My second-favorite is either a swimbait or Carolina rig – something that's slower or something that's hardly moving at all."

His Carolina-rig setup employs a Strike King Game Hawg (green-pumpkin), a 3/4-ounce weight and a 2 1/2- to 3-foot leader.

"When they first start sliding out, a lot of times they'll be in that inactive stage right after the spawn. If they're on secondary points or shallow ridges, you've got to go slow. A lot of times you can catch them bouncing a Carolina rig, a dropshot or a football-head."

Wendlandt is not one of those competitors who do nothing other than graph during preparation for an offshore-oriented tournament.

"If I'm practicing, I like to get a few bites," he said. "I want to get a feel for what they're biting on.

"When you're trying to find them, you've got to have some patience. If you know there's a lot of fish out, it pays to be a little bit stubborn. If you stay out there looking, you can find them."

He said that anglers need to become familiar enough with their own electronics units to know what they're looking at.

"The whole key is figuring out what bass are and what they're not (on the visual display). Me personally, I know what bass look like on my screens. Nobody's 100-percent accurate and sometimes there's other fish mixed in and you can get fooled, but that doesn't happen too often.

"If you ever get on a school where you're really catching them, run over them with the big motor and see exactly what they look like. Bass that are right under the boat are easy to identify with traditional sonar, especially when they start moving.

"To me, they look like spaghetti – a bunch of intertwined lines." 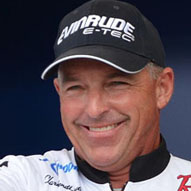