BACK
Most Treasured Lure

Fat Rap Was A Nice Gift In A Repugnant Package 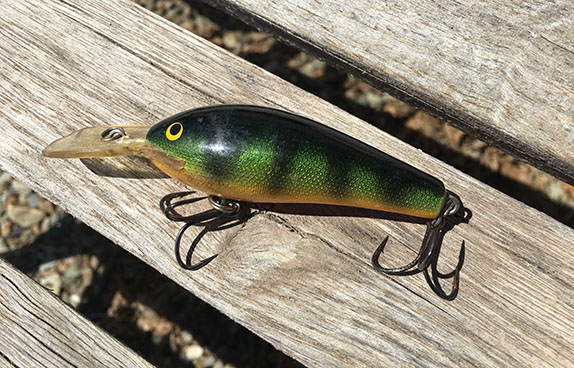 This old Rapala Fat Rap 7, a gift from a late friend and co-worker, has been in the author's possession for nearly three decades.

I wouldn't eat a stuffed one if a crisp $100 bill were slipped under the plate that it sat on and promised to me if I made the contents disappear down the hatch – the effects of such an attempt just wouldn't be worth the money and there's no way I could pull it off anyway, no matter how good the stuffing.

If somebody orders a take-out pizza, half with bell peppers and half without, I won't touch the other half because it's been under the same box lid with slices of the fruit that I despise so much and some of their hideous properties have undoubtedly transferred to the "clean" portion of the pie. When I go to a Mexican restaurant (one of my absolute favorite things to do in this life), I pray that nobody in my party or at any of the nearby tables orders fajitas because being forced to smell the sizzling bells wrecks the whole experience for me.

Now, with that firmly established, get a load of this: My most treasured lure once had one of its treble hooks embedded to the inside of a hollowed-out bell pepper and I was forced to remove it. That situation was created by a conniving co-worker (and good friend), who was fully aware of my distaste for bells and considered it quite humorous. It all went down during an office Christmas gift exchange almost 30 years ago.

During that same approximate time period, the guy also vomited on me. I was a still-young sports reporter for a NorCal newspaper back then and he was the chief photographer, and we'd traveled to Monterey to cover the opening round of golf's U.S. Open at Pebble Beach. He'd gotten a bad Polish dog or something and foolishly tried to expel the resulting gastric uprising out the driver's window of his red Toyota Land Cruiser not long after we started for home.

We were traveling about 70 mph down the 101 freeway at the time. You don't need a degree in physics to picture the result. We found the nearest car wash and I had to use the spray wand on myself. Yeah, I was wet for the remainder of the long ride home, but at least I'd gotten rid of the smell, which had achieved a near-bell pepper level of malodorousness.

That gentleman, David Forrest Nielsen, has been gone since the fall of 2007 – cancer took him at age 49 after a rough battle that lasted several years. I miss him terribly.

My cherished bait is a Rapala Fat Rap 7 in the perch pattern. It's made of balsa wood and was crafted in Finland, where the renowned company was born and its headquarters are located. Long out of production (these days the company offers only the FR-05, or what's known as the "Mini" Fat Rap), it's 2 3/4 inches long and weighs a half-ounce.

I wasn't much of a crankbait thrower when I got it – I did most of my fishing back then with plastic worms, spinnerbaits and buzzbaits on a decent-sized oxbow lake on a buddy's property that butted up against the Sacramento River. The Fat Rap just ran too deep to be effective on that shallow pond, but I was determined to catch a bass on it that spring and I managed a 2 1/2-pounder on a day when the water level was maxed out due to heavy rain. At some point thereafter, there was a day on Lake Oroville when the cranking bite was really hot and I pulled it out and boated several better-than-average spotted bass.

The joke was definitely on me that December day at the office in 1992 (or it could've been '91 or '93). Dave had told everyone in the newsroom about his scheme, leaving me in a quandary as he walked over and placed the bell pepper on my desk. I had to take the top part off to find out what was inside.

Still determined to avoid physically touching it, I thought about pulling out my pocket knife and using it to flip off the "lid." Then I remembered that I had a thin metal ruler in a desk drawer that I hardly ever used and didn't care much about. I grabbed it and used one of the corners to send the lid flying. It hit the carpet with the Fat Rap still attached.

I whacked the top several times with the ruler, as if it were a black widow spider intent on climbing up my leg and biting me, until the lure was freed. Then I slid the ruler under the top, lifted it onto the main body of the bell pepper and smashed it down inside. After that, I went and got a sturdy piece of cardboard, used the ruler to push the whole thing on top of it and carried it to the paste-up room trash can. Then I came back, picked up the lure by the bill, making sure the contaminated hook couldn't swing up and touch my thumb, and took it and the ruler to the break room for a thorough cleaning in the sink.

When I got back to the newsroom, all anybody who'd witnessed that ridiculous show could do was shake their heads at me and laugh. Meanwhile, my tormentor was feted like he'd just handed out $10,000 Christmas bonuses to the entire staff. The scene was rehashed every year until I left that job in 2001, but was thankfully never repeated.

I haven't tied that lure on in at least a decade, simply because I didn't want to take the risk of losing it. However, this past weekend I changed out the old hooks it came with for a pair of No. 3 Mustad KVD Elite Triple Grips that I had in the garage. It's time that I caught some more fish on it – after all, that was the purpose that my late friend intended when he got it for me – and I'll dive for it if I get it hung up and can't free it any other way.

Now I pose this question to you: Do own a lure that carries a great deal of sentimental value? If so, please snap a photo of it, write up a paragraph or two and send us an email at editorial@bassfan.com.

We're in need of some unique content during this coronavirus-dominated, tournament-free period. If we get several submissions, we'll combine them into a feature article.

Stay safe out there!