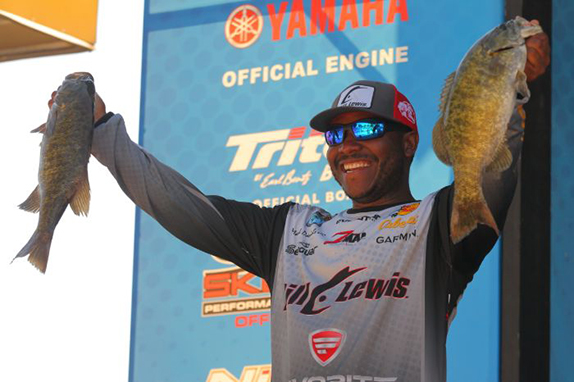 (Editor's note: In observance of the Independence Day holiday, BassFan will not publish a new First Cast article until July 5.)

One of the goals Mark Daniels, Jr. set for himself when he made the move to the Bassmaster Elite Series from the FLW Tour prior to the 2017 season was to make the Bassmaster Classic. He checked that box right away by qualifying as a rookie.

Another ambition he had was to one day hoist one of those blue trophies that Elite Series winners get to take home. He’d watched close friend Ish Monroe win one last week at the Mississippi River. Today, Daniels’ to-do list got a bit shorter and he made some history in the process.

Despite catching his smallest stringer of the tournament, Daniels’ 13-03 was enough to salt away the victory at Lake Oahe, a smallmouth fishery on the Missouri River that kept the pros guessing all week. Daniels, who left the dock this morning with a 6-pound, 5-ounce lead, finished with 69-09.

“Following up Ish’s win with a win here for me is monumental – historic," Daniels said in a release circulated by B.A.S.S. "As a black man representing this sport, I feel overwhelmed at the moment. I hope this inspires more people in the black community to get involved in the sport that has made my dreams come true."

Casey Ashley was a surprise runner-up with 66-05 after bagging 16-09 today. He’d been open about his disdain for the finesse techniques which are often used to target smallmouth, but he seemed right at home in the rolling hills of South Dakota.

Clifford Pirch capped off his massive rally from a poor day-1 showing with a tournament-best 20-11 that pushed him into 3rd with 66-02. Had this been a 5-day tournament, chances are Pirch would’ve been the man to beat as his weights increased each day after catching 7-10 on Friday.

After finishing 98th last week, Boyd Duckett caught 14-10, his smallest stringer of the week, and wound up 4th with 64-11, giving him his best finish since his win at Oneida Lake in 2012.

Here’s how the rest of the top 12 finished up at Oahe:

The wind was a non-factor for most of the final day, but the fishing pressure, especially in certain areas, seemed to take a toll on the remaining fish.

For virtually everyone in the field, Oahe was a new experience. The barren surroundings and massive lake made for a unique tournament venue and the challenge was compounded by a population of smallmouth smack in the middle of their post-spawn transition.

Had the event been held a month earlier or later, it’s believed the weights would’ve been consistently higher. 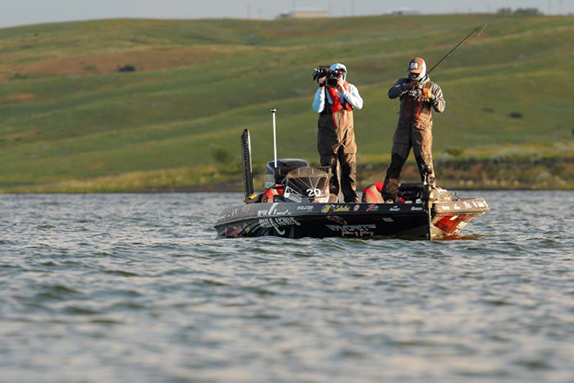 
Daniels felt right at home using his electronics to locate fish he could pitch to with his dropshot rig.

Wait is Over for Daniels

Three years ago, Daniels fished within spitting distance of where the Forrest Wood Cup winning fish were caught at Lake Ouachita. Last August, he came within 3 pounds of winning the Lake St. Clair Elite Series.

It’s safe to say his time was coming.

The man who left his state job in California as an agricultural biologist to relocate to Alabama with his family and to pursue a career as a bass fisherman – he spent 3 years on the FLW Tour after winning the TBF National Championship in 2013 – finally broke through and captured his first pro win today.

“I’m overwhelmed. I’m happy. I’m excited. I’m speechless. I’ve dreamed of his moment ever since I was 4 or 5 years old and it’s here and it’s real,” Daniels said on stage. “If you have something you’re passionate about and love, it doesn’t matter what it is. You need to put your head down to it and you need pursue it 110 percent because you’ll regret it the rest of your life if you don’t.

Daniels, who will turn 37 later this month, had a tougher day amidst calmer conditions on Oahe.

He mainly targeted deep points next to shallow flats and relied on two techniques to trigger bites – a Z-Man Finesse TRD threaded on a small mushroom-head jig (Ned rig) along with a Z-man Finesse WormZ wacky-rigged on a dropshot.

The win helped Daniels advance 14 spots in the Angler of the Year standings, where he’s now 26th with two full-field tournaments left on the schedule. 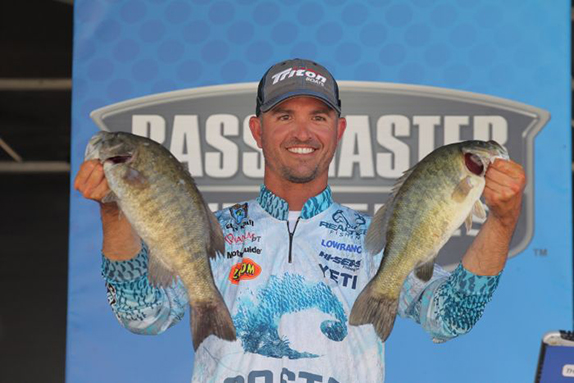 
Casey Ashley finished off a stellar week with a 16-09 bag of smallmouth today.

2nd: No Regrets for Ashley

Ashley capped off the only back-to-back stretch of the season with a second straight top-10 finish, giving himself four straight finishes of 26th or better. He’s now 6th in AOY points.

“I’m happy with it,” he said. “I had a good tournament. I wouldn’t change anything. I think I lost one fish all tournament.”

Today, he relied on the same spot that had produced his better fish throughout the tournament and it delivered him two big ones early on with a Carolina rig. Eventually, he caught another small keeper before leaving and coming back and adding a fourth to his livewell.

“After that I went to another spot I’d not gotten to fish because there’s always been a boat on it,” he said. “I pulled in there and made two big culls. It was fast and furious for a minute. When I pulled up those jokers were feeding.”

A dropshot accounted for those upgrades as he concentrated on the 15- to 25-foot depth range.

After a face-palm of a day to start the tournament left him in 87th place, Pirch roared back to claim his best Elite Series finish since a runner-up showing at Lake Havasu in 2015. It also gives him three top-15 finishes in the last four events.

“It’s definitely bittersweet,” the Arizona native said. “I feel really fortunate to have had a good tournament because that was a disaster on day 1. When I look at how easy it was, just 10 pounds on day 1 would’ve done it for me.”

Even without the 7-10 he caught on day 1, Pirch would’ve still finished 9th based on the 58-04 he amassed over the final three days. He fished the same spot all 4 days and targeted post-spawn fish relating to bait moving through the area. All of the fish he weighed in were caught on a dropshot using a variety of baits. His kicker today was a 4-09 and he had two others in the 4-pound range.

“The first half of the day was pretty steady, then it slowed down,” he said. “I still caught some, but the bait moved I think and we didn’t have a lot of current. It was a heck of a morning, though. It was rocking.” 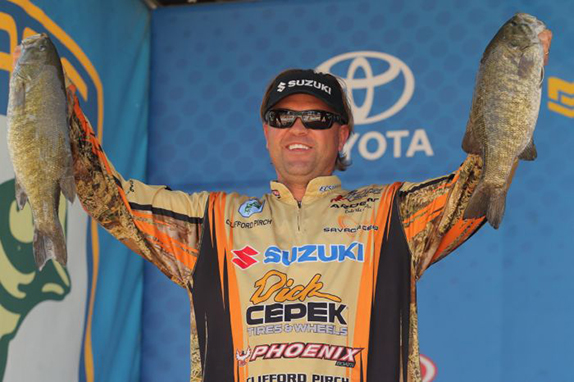 
It'll take Clifford Pirch a while to get over the sting of finishing 3rd this week.

Duckett feels like he had the fish to not only win on his line today, he had the fish on to possibly have a 23-pound bag. Instead, he hauled two 12-inchers to the scale and settled for 4th.

“It was a good week all around and I finished 4th so I better find a way to be happy with it,” he said. “But it was an extremely frustrating day. It’s so hard to win one of these and I had a legit shot to win it and I just gave it away.”

After catching three good ones to start the day, he began searching for other areas with schools of fish. He came across a point and noticed a single arch on his electronics. He dropped his bait down and it was a 5-pounder that he knew would be a difference-maker.

“I played it until it was worn out before I tried to get it,” he said. “I’m not real good at getting them at the boat and when I went to reach for it, it wigged its head and the hooks came out. That was a heartbreaker.”

That came on the heels of a 3 1/2-pounder that also came off.

“Those are the magic fish and I hadn’t caught fish like that all week,” he said. “It was a magical opportunity and I knew I had to catch a good bag. It could’ve been that special bag. When you get the bites and can’t close it, it’s heartbreaking.”

5th: Rojas Had a Blast

Rojas, who secured his best finish of the season, said Oahe had a similar feel to the desert lakes in Arizona and that made it easy for him to get comfortable with the big sky, expansive landscapes and long runs to get to unpressured fish.

“Without a doubt, it felt like home,” he said, pointing out that half of the top 12 had western roots. “All those guys have all fished big water, but it’s different from Lake Erie or Lake Ontario. This was like Powell or Mead, big reservoirs that have the same looking stuff on the bank. For them to break it down so quickly and not be afraid to run 50 to 80 miles to get to that deal didn’t surprise me. That’s what we deal with. For us it was no big deal.”

His weights increased each day, but his presentations remained consistent. He threw a dropshot using a 4-inch Big Big Baits Cane Stick in 15 to 22 feet of water.

“I ran 80 miles (up the lake) because those fish were unpressured and dumb and easy,” he said. “When you have 6 hours to fish, those are the ones you want. You want the ones that bite when you drop it.

“The big ones were on the bottom They’re not going to chase stuff like the 2 1/2s and 3s that were blasting bait out of the water.”

His kicker today was a 4-07, his biggest of the week, and he had another one over 4 pounds.