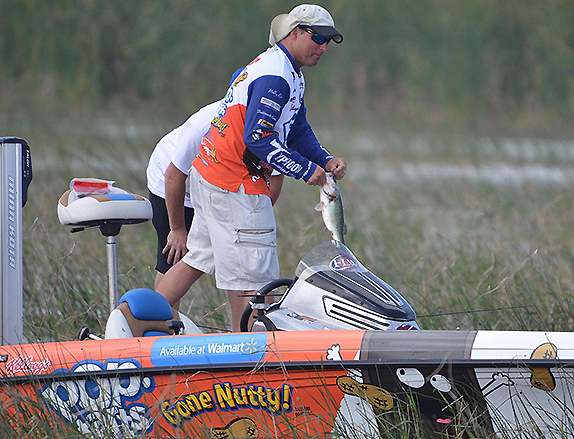 Greg Bohannan credited some new equipment and sticking in one area for his runner-up finish at Lake Okeechobee.

The weights at the season-opening Lake Okeechobee FLW Tour eclipsed most expectations and it wasn't because it turned into an all-out sight-fishing derby.

Stable water levels, a mix of overcast and sunny conditions and the fact that a good portion of the bass seemed to be on the move toward their spawning grounds put the field of 178 anglers in position to catch some quality fish as they sorted through a high volume of keeper-sized specimens.

The lake has undergone some changes from last year and even since December as efforts to curtail hyacinth and other vegetation growth have seemed to put a dent in Okeechobee's grass. There was still plenty of green stuff to fish, but last week it was subsurface hydrilla and reed heads that seemed to attract the most attention as anglers tried to key on areas where fish were moving in and out as they moved up to spawn or moved back out to the main lake.

While Brett Hite parlayed a monstrous day-1 bag into a massive lead he never relinquished, those who were just beneath in the standings caught their fish in much the same way – a combination of moving baits and flipping patterns.

Here's how the rest of the Top 5 went about their business in the season opener.

Bohannan didn't have to knock off the rust from a lengthy offseason once he arrived at Okeechobee.

"One thing I did this winter was I fished all winter long at home," he said. "I was on the water a bunch and I normally don't do that. I killed two big deer with my bow, then I got on the water. I guided some, but mostly I fished a lot."

He pointed to a decision in practice that ultimately led him to the area he camped in during the tournament.

"I felt like I could catch them on a spinnerbait on the outside at a spot I had a in the Monkey Box," he said. "But I fished through there a couple hours without a bite.

"I moved to my secondary spot where I thought it was going to be more of a numbers deal, but the big ones just came to me. It had extremely hard bottom and there were a lot of bass beds. I felt like they were coming to me every day."

While he never had to share water, there were plenty of other competitors in the vicinity.

"There must've been 200 pounds of bass caught there over the 4 days," he added.

When he got around gator grass he would gurgle a swimbait across the surface and flip reed clumps. It was a 1-2 punch that resulted in his career-best Tour finish.

"I've never had a tournament where I went somewhere and just sat there," he said. "The last 3 days of the tournament, I spent all 8 hours each day in there. My graph looked like spaghetti from going back and forth in that small area."

> This was Bohannan's first Tour event using the new Ardent Apex Elite reel, which weighs 5.9 ounces. "I was worried about them holding up with the braid and abuse down here," he said. "I'm not worried anymore."

> The key to getting bites on the Big EZ was fishing it along the surface like a buzzbait.

> Main factor in his success – "Just finding the right area. There's no doubt that area was key."

> Performance edge – "My MinnKota Talons and trolling motor. I cut through some of the thickest stuff you could imagine. My Ranger and Evinrude were great, too, but those Talons were crucial there." 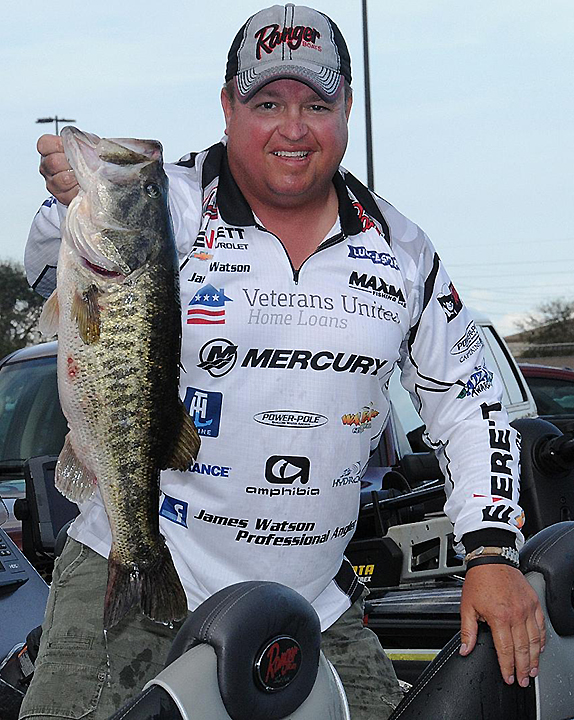 
James Watson collided with a few big fish at Lake Okeechobee, including this 8-pounder, which is the biggest bass he's ever caught.

Nobody in the Top 10 had a better weekend than James Watson. He caught more than 43 pounds over the final 2 days, including the biggest bass of his life on Day 3. He parlayed that strong finish into a career-best Tour finish. He was the lone finalist to catch 20 pounds three times during the event.

He paired a random morning open-water moving bait pattern with an afternoon flipping strategy to average just over 20 pounds a day.

"This year, I fished a lot more open water hydrilla than ever before," he said. "I gave zero effort to hyacinth mats or other big things. I didn't punch at all in the tournament."

During practice, the flipping bite didn't turn on until the afternoon, so he filled his mornings with plenty of casts with a spinnerbait, a Zoom Speed Worm or a swimbait.

"In the morning, it was just totally random," he said. "I'd see something and think I needed to burn a spinnerbait over there or a swimbait over here. If I went 20 minutes without a bite on something, I knew it was time to try something else.

As he fished, he said he'd do laps, starting on the outside edge, then working through the middle before fishing along the reed lines. When he got to a section of reeds, he'd throw his bait into them and slowly bring it out.

"That made it more difficult because most of the bites would come right on the inside," he said. "I couldn't parallel the reeds because those fish wouldn't come out to get it."

> Main factor in his success – "Shooting from the hip and throwing a particular bait at the right time for nothing but a random reason. We used to say in the Army, 'Adapt and overcome,' and that's what I did."

> Performance edge – "My Bass Pro Shops super-fast CarbonLite reel and that 65-pound Maxima braid. I fell in love with that braid. It's the same braid I used when I won at Table Rock." 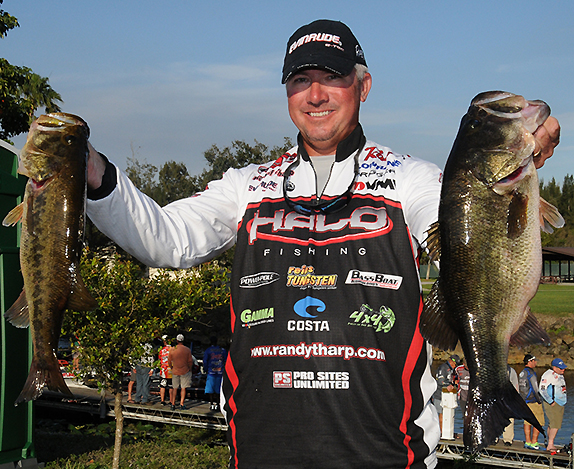 Randall Tharp was the lone angler to focus the majority of his effort on punching, which is his preferred method of fishing at Okeechobee. He knew the way the lake set up didn't favor that style, but he stuck with it and came away with his third Top-5 finish in the last 4 years at the Big O.

"It was pretty much dominated by guys winding," he said."Where Hite and everyone else was, it was offshore. There was no grass topped out, but there are some subtleties there. Those guys were fishing off hard lines. There fish bedding everywhere and notoriously that corner of the lake has the biggest population of fish.

"Obviously, flipping and punching and doing what I do, you have to commit to that," he added. "I committed to it last year and had my worst finish in 5 years [15th]. I committed to it again."

Had two key bites on a jig on day 1 that he suspects were bedding fish on a reed head point.

"The rest of the time, I fished isolated hyacinth or trash mats as we call them," he said. "Some of them were about the size of a kitchen table. Others were as big as a trailer. I keyed mostly on the smaller ones."

He said he wasn't able to expand on the primary stretch he fished on day 1, when he caught his heaviest stringer. He had other other areas, but they weren't as productive.

"The weights were way up over what I thought they'd be," he said.

He said he saw videos and pictures of Okeechobee taken during the Bassmaster Classic Wild Card event in early December. He said there was little resemblance to what it looked like last week.

"It didn't look anything like that now," he said. "For that Wild Card deal, it was a flipper's paradise. This week, it was more of a winder's paradise. I've spent several winters here and I've seen how fast the lake can totally change with just one cold front.

"I really feel pretty pleased to have stuck it out and have gotten a few good bites every day."

> Main factor in his success – "Just my stubbornness with my flipping stick. I wouldn't have finished 4th winding or sight-fishing. I'm just so dedicated to that way of fishing here."

> Performance edge – "Any time I fish down here, my Power-Poles are important. There were key, especially in the wind on day 4. All of my equipment – my rod, reel and line – all worked flawlessly. Some people come down here under matched and don't understand what you have to have." 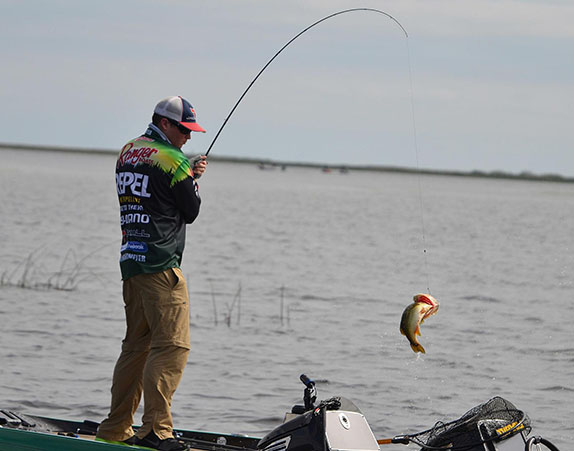 
Cody Meyer made a point to stay in one general area this year at Lake Okeechobee.

Cody Meyer came to Lake Okeechobee with a couple goals in mind this year. First, he had to avenge a miserable 118th-place last year that left him scrambling the rest of the season to make the Forrest Wood Cup. Also, he wanted to focus his attention on one portion of the lake rather than have spots all over the big pond like he did a year ago.

"Last year, I'd fish a half day there and a half day up north," he said. "This year, I focused all of my efforts on one area and had plans B and C nearby. The area had open water and hydrilla and within 2 minutes I could be flipping mats or isolated reeds, which made it nice."

Meyer said he chatted before the event with eventual winner Brett Hite and they talked about places they've fished that are comparable to the west side hot spots at Okeechobee.

"We talked about Frank's Tract at the California Delta and how a lot of tournaments are won there," he said. "Harney Pond and the Monkey Box at Okeechobee are about the equivalent to Frank's Tract. I focused on those two areas and really tried to dial them in and figure out those areas."

He focused mostly on areas with hard bottom, flipping mats and reeds on days 1 and 4. He caught his fish on the middle 2 days on moving baits.

"The bite was better (this year) and the weather was great," he said. "There were fishing moving in and I was able to learn a lot about the lake and what to look for in terms of types of grass and areas with hard bottom where fish will move during pre-spawn and the spawn and how they migrate.

"Every day, it was something drastically different. I was able to make the right adjustments and that was key."

> He lauded the new Metanium reel that picks up 36 inches of line per turn. "When you stick a fish there, they come flying at you and it was important to have them under control," he said.

> He split his weigh fish on days 2 and 3 between a Gambler swimjig (black/blue) and a Z-Man ChatterBait (black/blue). "I couldn't get bit on anything other than black and blue," he said.

> Main factor in his success – "Adapting to the situation and concentrating on one area in practice and dialing it in and mixing it up with an open mind
trying to understand the grass. I was able to visualize where the fish were moving in."

> Performance edge – "My Typhoon glasses were big. There were a lot of the spots where I was pitching to sub-surface hydrilla and they allowed me to see that stuff. My Power-Poles were key as well. With the wind blowing, I was able to slow down and pick those places apart."