BACK
Big Hill To Climb 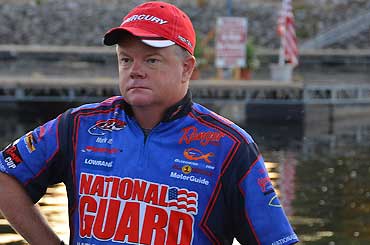 Mark Rose has his work cut out for him if he's going to qualify for the Forrest Wood Cup this year.

To listen to Mark Rose give the play-by-play of his first two FLW Tour Majors of the season is to hear the similar accounts of dozens of other pros who endured comparable struggles at Lake Hartwell and Table Rock Lake.

For some, it was a poor practice that never turned into a consistent bite during the tournament. Others had their game plans undermined by a change in the weather or a drop in water level. Others, still, just flat-out missed getting on a solid pattern altogether. For Rose, it was a little bit everything and then some.

After putting together consecutive 3rd-place finishes in the FLW Angler of the Year (AOY) standings in 2010 and 2011, BassFans were apt to believe Rose was in prime position to make the move to the top of the heap this season. After two bombs -- 98th at Hartwell and 127th at Table Rock -- to open the Major schedule his focus isn’t on AOY. He’s more concerned with today and tomorrow, taking on what’s in front of him -- the here and now.

“My motto is I fish as hard as I can at every tournament and I try to honor God in the process,” he said. “I leave the results up to him as I don’t have a lot of control over that and I can lay my head on my pillow at night and be content knowing that I have worked hard.”

“I’m living out my faith through fishing, which is something that’s very dear to my heart. It’s actually why I fish. God’s blessed me with ability to make a living at it. I still have a great group of sponsors who know you’re going to have a few bad tournaments. It’s not like my career is over. I’m going to work really hard.”

Currently, he has 177 points and sits in 117th place in the AOY standings, 139 points out of 35th place, the cutoff for automatic berths for the Forrest Wood Cup. He knows the size of the task that lies ahead of him if he has designs on fishing his sixth straight Cup. Add in an 81st-place finish at the Okeechobee FLW Tour Open and it’s fair to say Rose is mired in your garden-variety mini-slump.

Reached by phone earlier this week after a quick lunch with his wife in Memphis, Tenn., Rose’s voice drips with experience and poise. Hearing him offer his impressions of his season so far and where he hopes it eventually takes him, you wouldn’t think he was going through his toughest season since 2003, when he finished 124th in points. He’s finished no lower than 59th in the 8 years since.

He’s a deeply spiritual man and he says his faith has provided him with the outlook necessary to endure the tough times he’s having on the water.

“I’ve got it in perspective in my mind,” he said. “I try to keep my career that way. It’s disappointing from the standpoint of being a competitor. It seems like an eternity to me -- three major tournaments, but in all actuality, I’ve had 6 days on the water that haven’t gone my way. When I look back on it, it’s not going my way right now. I have as many excuses as the next guy. I have a lot on my plate, more so than normal right now.

“The bottom line is I was there and I had the opportunity to catch them and somebody else did. I didn’t. I don’t play the excuse game. I’m not going to blame it on anything even though I have stuff to blame it on. Hopefully, it’ll turn around, but if it doesn’t, I’m competitive, and I’m very content with where my career has taken me. I’ve put my career in the Lord’s hands and I’ve asked for His will to be done throughout my fishing career so I’ve got to learn to accept it. Even though I’m competitive, I’ve got to accept the good and bad.”

He’s had plenty of good happen to him on the water, to be sure. Last year alone, he racked up one win (Pickwick Lake FLW Tour Major) and three other Top-6 finishes, including a 3rd at the Cup, earning nearly $300,000 along the way. Things have gone much differently this year.

At Hartwell, he was fishing deep water in the rivers, but couldn’t get the quality bites that tournament winner Brent Erhler was getting in the lower main lake.

“I was only catching spots deep and I really thought it was going to be an Alabama Rig deal,” he added. “I’ve said it before, those herring lakes are one of the missing pieces to the puzzle for me. I haven’t figured out those lakes yet.”

At Table Rock, he focused on main-lake points, but that pattern faded as the current being pulled through the lake tailed off.

“I probably should’ve turned my electronics off and got on the bank and gone fishing,” he said. “I should’ve been up in that muddy water or sight-fishing more. I tried to do a little bit of both and didn’t do either one of them well.”

If there’s any place Rose could get his season turned around, it’s Beaver Lake, the next Major on the schedule. His worst finish there in the last 5 FLW Tour events there is 49th and he has a pair of runner-up efforts to his credit over that span.

“I’d like to tell you I’m going to go to Beaver and win it, but there are 160 guys that going to disagree with that,” he said. “I’m going to try to turn the competitive part of this around by just continuing to do what I do and continuing to work hard. Hopefully, things will turn around.

“I’m going to go to Beaver and work as hard as I can and fish hard and I’m going to honor God and leave the results up to him.”

On the horizon, though, is the possibility that he could miss qualifying for the Cup, an outcome he’s prepared for.

“The Cup is certainly a big tournament,” he said. “It’s something that I’d like to be at every year. It’s one of the two biggest tournaments of our sport. Every fisherman on the FLW trail, it’s where they want to be. I’ve certainly dug myself a big hole and it’s going to be hard, but I’m going to work as hard as I can. I can’t sit here and say I’m going to get there because there are a lot of people who want to get there, too.

“If the Lord wants me to be there, I’ll be there. I certainly haven’t lost the competitiveness to make a good effort to try to get there.” 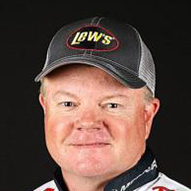