When Griffin's Flipping Fish Ran Out, Schoolers Took Over 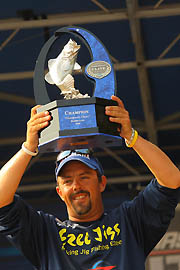 Chad Griffin based his pattern at Oneida on what Mike Iaconelli had done en route to a 3rd-place finish last year.

Winning the Oneida Bassmaster Elite Series might've saved Chad Griffin's professional fishing career. Without an influx of sponsor money this offseason – an unlikely development considering the state of the economy – the rookie from Texas probably wouldn't have had the necessary financial backing to return next year.

"I'd told friends that I wasn't going to fish next year unless I had some money going into the season," said the 32-year-old Alaska native who now resides in Cresson, Texas. "Without this, I probably wouldn't have had it. I told people that unless I go up there and win, I'll probably be guiding next year."

He'd finished no higher than 32nd in any of the previous seven Elite events this season and there was no inkling that he'd be any kind of factor at Oneida. But a solid gameplan derived from practice carried him through the first 2 days, and a fortuitous discovery on the second day got him through the weekend.

Griffin, a dedicated power-fisherman, based his practice approach on the grass-flipping pattern that Mike Iaconelli employed to notch a 3rd-place finish at Oneida in 2008.

"I came up here with the intention of flipping and that's all I did for the first 2 days of practice," he said. "Ike caught that 20-pound bag last year and showed what you needed to do to catch the larger fish.

"I didn't focus so much on the areas he was in – he was right in front of the boat ramp. I went to the northern end and found some nice little areas up there."

He looked for areas like those that are productive back home at Amistad – ditches and drains that ran out into the grassbeds and horseshoe-shaped areas at the backs of bays. He concentrated on water that was 11 to 15 feet deep.

The two best areas he found had a mix of cabbage grass and milfoil. And best of all, there was nobody around – it seemed that everyone else was either pounding the super-shallow water, where Dean Rojas and Tommy Biffle had won in previous years, or hunting for offshore smallmouths.

"I just kind of went in between what everybody else was doing."

Griffin didn't have a definitive starting area for day 1, so he decided to try a clump of grass where he'd caught a 7-pounder in practice and gotten two other bites. On his third flip with a 1 1/2-ounce jig, he hooked a 5-08 brute that would stand up as the big fish of the tournament.

He caught two other largemouths in there, and then completed his limit from a couple of other waypoints. His lightest bag of the event left him in a tie for 13th place.

He started day 2 in the big-fish hole and caught a 3 3/4-pounder, then added a 4, a 3 and a 2 at succeeding stops. His next move was to a grassy area where he'd originally found largemouths, but they'd been pushed out by smallmouths. He flipped up one of those – a 4-pounder – on a Reaction Innovations Sweet Beaver to push his bag to about 17 1/2 pounds.

He knew it'd be tough to improve on that weight, so he went farther out into the bay to another smallmouth area. He heard a commotion behind him and turned around to see three schools of big bronzebacks hammering baitfish.

He threw a Senko into the midst of them a couple of times and caught two 4-pounders that allowed him to cull up by about a pound. He killed the remaining 2 hours fishing around the launch and departed the ramp that evening holding a 1 1/2-pound lead. 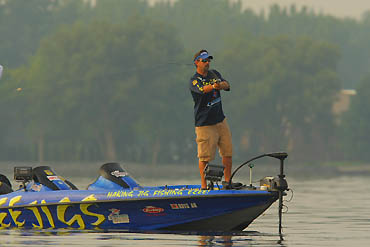 
Griffin happened upon some big smallmouths that carried him through the final 2 days.

A strong east wind arrived for day 3 and it rendered his starting spot (the grass clump where he'd caught the big largemouth on day 1) unfishable. He went back to the schooling smallmouths and found them ravenous again – he loaded up 15 pounds in about 20 minutes on a topwater chugger. He later flipped up a 4-pound smallmouth and shut everything down at 1:00 with a 16-plus bag that extended his advantage to more than 4 pounds.

He had no trouble sleeping with that lead – in fact, he dozed right through the alarm and was late getting to the launch for the final day. He eventually headed out with a flotilla of spectator boats in tow, and it didn't take him long to take care of business once he arrived at the schooling spot.

There were some largemouths mixed with the smallies that day and his final bag contained a 3 1/2-pound green fish, along with a 4-pound bronzeback. It was rounded out by two 3-pound smallmouths and a 2 1/2-pound largemouth and was plenty heavy enough to secure the victory.

> Main factor in his success – "A lot of it had to do with my attitude – I didn't have a care in the world. I also listened to my gut all week and it worked out, like when I found the Mother Lode of schooling smallmouths. When it's your time, you can't do anything wrong."

> Performance edge – "One of them was my Lowrance X28 graph because I could trust it enough to go to my waypoints and not be 20 or 50 yards off. The other was the flipping rod I designed for Custom Angle. It's got a lot of backbone, but it's also got a limber tip and you can set the hook on a fish without it feeling you."