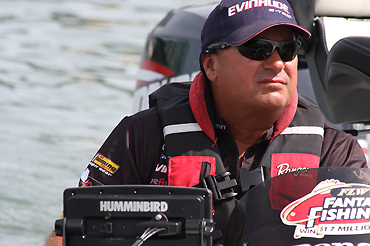 Kim Stricker and his son Danny were on their way to their Michigan home from Arkansas when they were involved in a frightening highway accident recently.

The way Kim Stricker looks at it, when you've logged as many highway miles as he has over the past quarter-century, you're bound to have had an accident or two. He's just glad that he and son Danny were unharmed in a scary one earlier this month in which his brand new Chevy Suburban was totaled.

The veteran Michigan pro and accomplished underwater videographer had traveled south with his 27-year-old son to meet up with FLW Outdoors president Charlie Evans and film an episode of his TV show, Hook n' Look, at Tennessee's famed Dale Hollow Reservoir. From there, they went to Arkansas for the annual Ranger product knowledge seminar, and then logged about 5 hours driving time toward their home in Howell.

The final leg of their trip the next morning was cut short after about 20 minutes. With Danny at the wheel and the boat in tow, they hit a patch of black ice on Interstate 70 just east of Effingham, Ill. The rig slid across the left traffic lane, broke loose from the boat trailer and flipped over 1 3/4 times on its way to the bottom of the sloped center divider.

Just before they got into their own accident, the Strickers saw an 18-wheeler that had gone off the other side of the freeway and was laying on its side. Then they saw a deer on the side of the road and thought the animal might have caused that wreck.

Danny then switched over to the right-hand lane, and they immediately felt a gust of wind. Just a moment later, they were sliding across the black ice.

"We found out later that the police call that area 'Death Valley,''' Stricker said. "It's wide open and when the wind blows the snow around, the road just glazes over. We also found out that there had been five or six other accidents that day over that same 5-mile stretch."

Stricker was logging time codes from his camera onto a laptop computer for the tapes they'd shot at Dale Hollow when the vehicle went out of control. He recalls covering his head and face with his arms: he could see what was about to occur and feared taking a major blow to the head from the heavy camera.

The flipping lasted only a few seconds before the Suburban came to rest on its side with the passenger door on the ground, but he said it seemed the tumbling had "gone on forever."

When it was over, both father and son were fully conscious and aware of what had happened. The first person on the scene was a female big-rig driver who'd formerly been a nurse, and she got them to free themselves by kicking out the crystallized windshield.

"This is going to sound like a commercial, but thank God we were in a Chevy truck," said Stricker, a member of the Chevy FLW team. "The seatbelts and the side-impact airbags all worked exactly like they should have, and the OnStar System activated immediately and sent for (emergency medial services).

"That truck protected us."

Kim Stricker experienced a bit of a "wrenched neck" from the rollover and was taken to a hospital for examination on a backboard with a neck brace. The exams showed no structural damage, however, and he was released shortly. 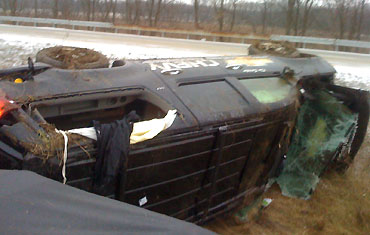 
Here's a look at Stricker's Chevy Suburban in the immediate aftermath of the wreck.

His son required no medical attention whatsoever. "I remember when we stopped rolling and he was above me, just screaming and asking if I was all right," he said.

The Suburban, which he'd had for just a couple of weeks, was a complete loss. Conversely, the boat suffered little damage.

"When we started to roll, the boat trailer broke free and came off the hitch, and the tongue just buried in the ground," he said. "The boat slid about 4 inches up on the trailer, which bent the bow winch. The winch and the trailer tongue need to be replaced, but that's all.

"Another thing I'm thankful for is that the dive tanks were in the boat and not in the back of the truck because if a valve gets knocked off one of those, it's like a rocket. We do it that way for that reason."

> Stricker said all of his camera equipment and diving gear came through the accident unscathed. There was a small umbrella in the far back of the vehicle that somehow got ejected and ended up hooked to the front of the hood.

> The lady trucker got on her CB radio and advised her fellow big-rig drivers to slow down when coming through the area. "We walked across the highway to where she'd parked and it was like a skating rink, but the trucks were still coming by at 50 mph. We could hear one of them say, 'Wow, there's an unhappy fisherman,' not even realizing what had caused the accident. They were like we were when we saw that truck on its side."

> He was involved in a similar ¬ – but far less dramatic – black-ice incident many years ago in New Mexico. "I was with my wife and we were climbing a mountain, and we could see a semi in front of us swaying back and forth. Then we hit (the ice). Fortunately, we just did a 180 and slid into the median. We didn't roll."