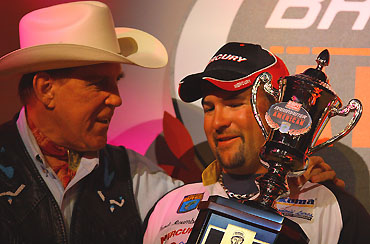 Fred Roumbanis is congratulated by BASS founder Ray Scott after accepting the trophy at the Bassmaster American Major.

Maybe this limit thing is overrated after all.

Whether it was High Rock Lake for the first 2 days or Lake Townsend for the last 2, just about everybody who competed in the Bassmaster American Major was concerned about whether they could catch five keepers a day in North Carolina. Fred Roumbanis couldn't do it on any of the 4 days, but he won anyway.

The 28-year-old, who recently moved from California to Oklahoma and is set to become a father in the next day or so, weighed four fish for 7-04 today. That gave him a 21-14 total for the 2 days at Townsend – easily enough to notch his first tour-level win.

Missouri's Brian Snowden, who caught both limits recorded at Townsend, finished 2nd with 17-03 (8-03 today). California's Ish Monroe, who was the only angler standing between Roumbanis and victory twice last year (the Amistad Elite Series and Busch Shootout) caught two fish for 6-07 today and finished 3rd with 11-06.

Arizona's John Murray moved up two places today with a two-fish, 6-04 bag that left him fourth with 9-01. Missouri's Mark Tucker caught a single 1-pounder today and finished 5th with 6-09.

Arkansas' Mike McClelland blanked today and brought up the rear of the Top 6 field with 5-14.

The $250,000 winner's check is a huge boost for Roumbanis – not only because he has a child on the way, but because he lacks a major non-endemic sponsor and pays most of his expenses out of his winnings.

"It's unbelievable," he said. "That thing's sitting here in my pocket, and it's got a lot of zeroes on it. I've always been content with just $250.

"I needed it – I won't lie. This is a hump I had to get over. I have good support or else I wouldn't be out here at all, but they're all within the industry and they're not really high-paying sponsors. I've had to do a lot of it on my own."

He entered today with a 5 1/2-pound lead and set a goal to catch a couple of decent fish to nail down the victory. As he rotated through the six-hole course, he continually fished a 4-inch Roboworm at a painstakingly slow pace.

More details of his winning pattern, as well as those of the other top finishers, will be posted soon. 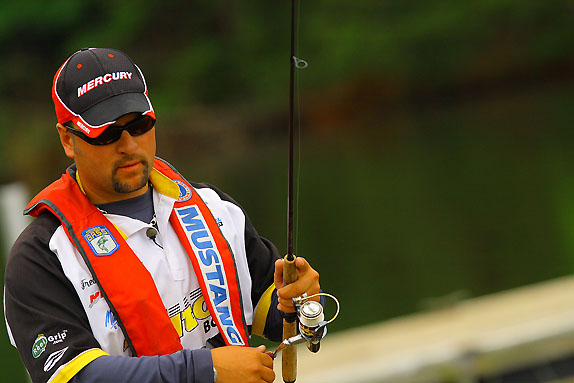 
Roumbanis used spinning gear and a 4-inch worm to catch the fish that sealed his victory.

Snowden wasn't thrilled by his runner-up finish, be he wasn't down in the dumps, either.

"It's okay," he said. "With the hole-course thing, I was glad I could do well. I covered a lot of water and kept an open mind the entire time, and just did what I could do."

If he had the last 2 days to do over again, he'd do more sight-fishing.

"Most of the bigger ones were caught that way. On (day 3) at about noon I started seeing cruisers and realized I'd probably made a mistake by not looking for more fish.

3rd: Monroe Will Take It

"I'm finishing high for as bad as I'm fishing," he said. "I'm a little bit appalled at all the fish I'm missing and losing."

He said he lost three fish over the 2 days at Townsend. "Two were good ones and the other one was decent."

At High Rock, he lost two and missed several each day.

"I have no clue what it is, but it's not clicking like it's supposed to. I never lose them on the practice days, so maybe it's just the excitement of the tournament."

4th: No Complaints from Murray

After one of the worst practices he'd ever experienced, Murray had no qualms with his 4th-place finish.

"I maximized what I had going. Obviously I wish I would've sight-fished a little more – I did a lot of fishing on that first day (at Townsend). There were quite a few more fish up than I'd originally thought." 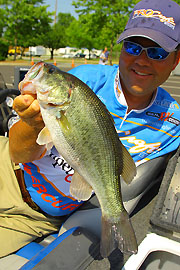 
Brian Snowden's total of 10 fish from Lake Townsend was three more than anybody else could manage.

He caught a 4-13 bed-fish with 5 minutes left today that took big-bass honors and moved him up one spot in the standings. He'd worked on it for more than an hour.

"I thought that fish had beaten me. I was pretty much done."

Tucker was more than happy with his second straight single-digit finish (he was 2nd in the Elite Series event at Guntersville last month).

It turned out that he'd overestimated Townsend's potential during his initial look Friday evening.

"When I rode it that first time it looked like it had a lot of potential. But after fishing it, in found that it has very limited cover.

"But I'm tickled to death to make the Top 12 and then the Top 6, especially after it looked like High Rock was going to be so tough."

6th: McClelland Ready to Move On

McClelland lost his only keeper bite today (a 3-pounder) and swallowed a donut, but that didn't ruin his visit to the Tar Heel State.

"I had a great week," he said. "Today I kind of got thrown off a little bit from my gameplan, but the Good Lord blessed me all week.

"That one fish eluded my when I tried to swing it in, and it cost me one place. It was a cruiser and I'd hooked it right off the bat this morning, and that got me to running the banks to see if I could see them. I probably should have just stuck to fishing."

He made the Top 12 twice in majors last year, but never advanced to the Top 6, so this was an achievement. 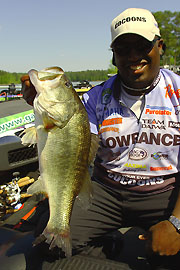 He's happy to see the sight-fishing portion of the 2007 season go into the history books.

"Some guys like it, and they can have it. By the time we get to Smith Lake, (the fish) should all be out where they're supposed to be."

> During practice, Roumbanis approached American defending champion Dave Wolak and asked, "What's it like to cash that check?" Now he'll find out for himself.

> Snowden was the only angler whose 2-day total surpassed what Roumbanis caught on day 3 (14-10).

> Tucker said 1,500-acre Townsend would have really been tough had it not been closed to the public for the weekend. "That was pretty cool for them to do that."