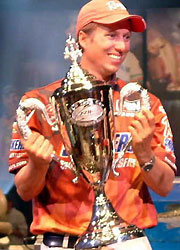 On day 3, Brent Ehrler decided to ditch everything else he had and focus on two key areas.

Practice for the recent FLW Tour Championship (FLWTC) at Alabama's Lake Logan Martin left more than a few anglers scratching their heads. The water was dropping – which killed the grass bite – and dreams of a current-driven deep bite never materialized.

Most anglers went into the event with plans to fish a mix of deep and shallow, but as the tournament progressed, docks grew to dominate.

Day 3 was the pivotal day. That's when Anthony Gagliardi's deeper bite fizzled, and Jay Yelas and Brent Ehrler rose toward the top.

Most surprising was that Ehrler's plan fell apart the first 2 days, but he used two clues from practice to find the winning fish.

Here's how the 29-year-old Redlands, Calif. angler won the FLWTC.

Ehrler arrived at Logan Martin on the weekend before competition, which gave him 3 full days to practice.

"I started the first day by throwing a buzzbait in the morning," he said. "Then, in the afternoon, I was throwing jigs and finesse worms around docks. I was also looking for humps, points and rockpiles. But I wasn't catching them very good."

He explored the river for the first few days, then decided to move downlake and launched at Lakeside. That morning, he again went out and threw topwater.

"Almost instantly, I caught a 12-pound limit," he said. "They quit eating the buzzbait, but I was catching them real good on a Lucky Craft G-Splash and Gunfish. This was all between 6:00 and 6:30 in the morning."

What he didn't realize yet was that he'd found the winning stretch of docks. As he noted, he wasn't catching them very well off docks, but in two spots, he caught a 2-pound fish that brought chasers to the boat with it.

So as practice ended, he had the two areas where he saw chasers, some scattered deep stuff, and his topwater bite. His plan was to start on topwater, probe offshore, then work the docks.

As it turned out, his topwater bite would be worthless. He assumed the field would launch at 6:30 a.m., but at the Championship, blast-off's at 7:00.

Ehrler faced Cliff Pirch in the first round.

He launched and immediately tried his topwater bite, but it was done long before he came off pad.

He didn't think much of those two areas yet.

Then he ran out to try a deep area, caught another keeper, and returned to the docks. He caught a few more 2-pound fish to cull up to 10 1/2 pounds.

He caught his first three fish on a shakey-head rigged with a trick worm, which fhe ished on braid.

On day 2, he started on topwater but didn't stick with it long. He quickly switched over to docks, and also tried some deep areas.

"I'd catch one here, then catch one there," he said. "It wasn't a great day. I'd go a long time between bites, and only caught seven or eight keepers." 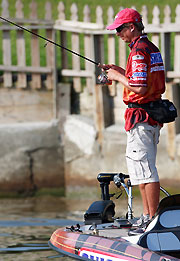 
Ehrler noted that his best area was a quarter-mile stretch of docks on an inside channel bend.

By this time, Ehrler knew his topwater bite was a bust, so he went immediately to one of his two chase-areas.

"I caught two 3-pounders close by in that same area," he said. "And I caught one 2-pounder offshore – fishing a point.

"Then I ran to my other spot (the second chase-area) and caught two more good ones. I left after that because I didn't want to beat it up."

Day 3 was the toughest fishing by far – many anglers struggled to catch even 8 pounds – and Ehrler's 13-04 was the second-best weight that day.

He easily dispatched Colson by a 5-10 margin.

By the time the day 3 weigh-in ended, Ehrler knew exactly what he'd do on day 4. He said at the time: "It's up to the fish at this point. I really don't think I can make any different decisions tomorrow. I know exactly where I want to go. It's completely up to them."

He went right to his best stretch of docks – the chase-area where he caught twin 3-pounders the morning before.

That was it. That single quarter-mile stretch of docks delivered 15 pounds on the final day, which was 11 ounces better than runner-up Ray Scheide's limit.

Here's what Ehrler said about the winning area.

"It was a stretch of docks about a quarter-mile long. It had maybe eight or 10 docks. It was in the mid-lake area of the main lake.

"The area was the inside bend of the river channel," he added. "The only thing I can guess about why it was so good was there was kind of a point on one side. Maybe they run from the channel up that point and start running the docks.

"I really have no clue though. I don't know why they were pulling up though there."

Ehrler dumped his trick worm on day 2 and started fishing a Roboworm and NetBait Finesse worm on shakey-heads.

On day 4, he caught all his winning fish on the NetBait worm.

He noted that during practice, Geoff Walker of Mark's Outdoors – an area retailer – gave him a pack of the worms in a special 'Bama bug color. The color is exclusive to Mark's and is a killer on Logan Martin fish.

After the worm started working on day 2, Ehrler had Walker rush him over a supply for days 3 and 4.

He pitched the shakey-head/worm combo under and around docks. In-between docks, he cranked a Lucky Craft RC 1.5.

> Ehrler said the 'Bama bug color is a dual color. One side is junebug, then it fades into green-pumpkin on the other.

> Main factor in his success – "I just think that on the second day I started to click and got on something a little more. I had a little more confidence in the areas I had. I finally told myself, 'Why even try deep?' I spent time where I thought there was fish – where I saw those chasers."

> Ehrler never weighed a largemouth all week – only spotted bass.

> In the FLW Outdoors weigh-in format, the first angler weighs all his fish, then other anglers weigh their fish one-by-one until they beat him. Ehrler was one of the first to weigh in, which means he had to watch others try to beat him. He said he was tense when Ray Scheide pulled out his big fish. But he was most tense when the final angler, Anthony Gagliardi, weighed in. "It was pretty crazy," he said.

> Anglers in the FLWTC are seeded based on their Angler of the Year points standings. Ehrler was seeded 40th.

> The FLWTC was also held at Logan Martin 2 years ago. Luke Clausen – another young gun from the West – won that event on, yep, a jighead worm. 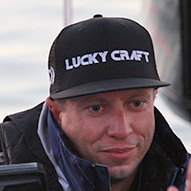