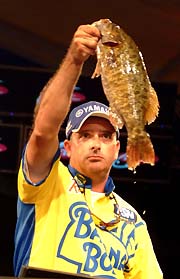 Kevin Vida came within a pound and a half of his first tour victory.

Abundant smallmouths, or fewer but bigger largemouths that live farther away from the launch?

That was the big question at the recent Champlain FLW Tour. The best-laid plans to pursue either species could boom, but they might also bust. Some tour-level events out of Plattsburgh, N.Y. have been won with either one exclusively, and others with a combination of both.

North Carolina's Tracy Adams won with largemouths, and green fish were also the focus of 3rd-place

finisher Dion Hibdon of Missouri (who led for the first 3 days). The other three anglers who finished in the Top 5 keyed on smallmouths.

Michigan's Kevin Vida is a threat to win at any venue that features big numbers of smallmouth, and he came up just 1-06 short of his first tour victory here.

His preferred pattern was sight-fishing for bedding bronzebacks, but that was difficult on the middle 2 days due to clouds and wind. But even when he couldn't see the fish, he could still catch them because he had their locations pinpointed.

His bags consisted of 18 smallmouths and two largemouths. He caught both largemouths on day 3 (they were fish on a flat that he'd seen earlier).

He relied on two baits – a Mizmo tube and a Berkley Jerkshad.

> Main factor in his success – "My new Solar Bat sunglasses – I have to give them credit. I got a new pair with high-contrast yellow lenses, and they opened up a whole new world for sight-fishing. Even on cloudy days, I could find fish. It's an amazing lens." 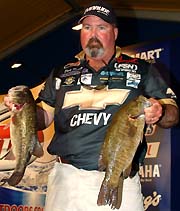 
Dion Hibdon didn't win, but he achieved his goal of qualifying for the FLW Tour Championship.

Hibdon's plan for this tournament has been well-chronicled: He came in 75h in the points and wanted to move into the Top 48, which would give him his first berth in the FLW Tour Championship (FLWTC) since 2003.

Along with his father Guido and Northeastern Stren roommate Ricky Doyle (a Champlain local), he determined that his only chance to achieve that goal was to catch some big largemouths from the Ticonderoga area at the southern end of the lake. It was a brilliant plan.

He fished a jig in milfoil beds and whacked the biggest sacks of the first 2 days. His bite slowed when the north wind arrived on day 3, but he'd already accomplished what he set out to do.

The bucketmouths in the milfoil were eating bluegill, and he threw big jigs that mimicked that forage.

"I never backed down from what I was doing," he said. "My intention was to make the Championship, and I was fortunate enough to do that (he ended up 43rd in the points).

> Main factor in his success – "I fished for big fish with a big bait and I never gave up on it." 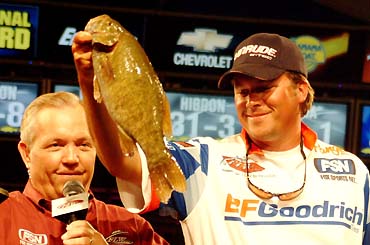 
Scott Martin had a victory plan, but he got tripped up on day 3.

Florida's Scott Martin has made three straight Top 10s here and won in 2004. He loves to catch Champlain's smallmouths and tries to avoid largemouths entirely – unless he finds a spawner that might help him.

He sight-fished for bronzebacks the majority of the tournament and caught them on a Berkley Power Tube. His first 2 days went precisely according to plan, and he went into day 3 with considerable confidence that he'd gain his second straight victory here.

He stumbled a bit on day 3 though, and attributed it primarily to "bad note-taking." He hadn't accurately kept track of which bedding fish had been caught by himself or someone else, and wasted some time running to a few that were no longer there.

> He switched to a 7'6" medium-heavy Kistler Helium rod when the wind was at its worst. "It was made special for me 2 years ago, but now it's a production rod."

> He had three Garmin GPS units on his boat – two at the front and one on the console. "I had so many waypoints on the one on the front that there was just too much on the screen."

> Like Vida, he said his sunglasses made a big difference. His were made by Panoptx. "They have a lens that's called copper, and it really enhances your sight-fishing ability. The clarity is that much better."

> Main factor in his success – "A 55-gallon drum of confidence and a plan – a plan for fishing and a plan with God." 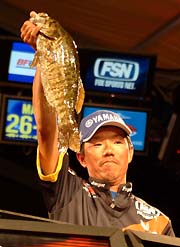 Shinichi Fukae of Texas made his third Top 10 on the strength of finesse worms. He spent a little bit of his practice time pursuing largemouths, but the bulk of it was devoted to bronzebacks.

He fished for smallmouths exclusively during the tournament and primarily targeted humps. He didn't sight-fish.

> Main factor in his success – "It's a lake I like a lot and I was able to use my finesse skills."