Clark Stuck With Spot Even As Fish Dwindled 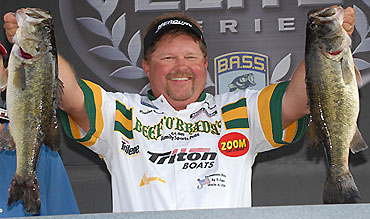 Preston Clark often got frustrated in his main area, but he fished through the feeling.

How in the world did Preston Clark catch 20 bass that weighed a record-setting 115-15 total?

Sight-fishing, of course. And that's what pretty much everybody else did at the recent Santee Cooper Bassmaster Elite Series.

One notable exception was Mike Wurm, who made blind-casts to isolated wood. Other than that, it was hands-down a sight-fishing event. And Clark, a second-year pro, is one of the best at it.

He led the event wire-to-wire and it was his first tour-level victory. Here's how he did it.

Santee Cooper was one of those rare tournaments where the entire dynamic changed with only a few hours of practice to go. A cold front had held the spawners at bay for weeks, and the first 2 days of official practice were miserable.

But he laid important groundwork.

"On Monday, I went into an area that had some spawning activity earlier – there were a bunch of old beds," he said. "I'd read about Kelly Jordon's performance here a couple of years ago. (Jordon won the 2004 Santee Cooper Bassmaster. – Ed.) Conditions were setting up exactly like when he won.

"There was a cold front, the water temps were the same, and the moon phase was the same."

On Wednesday, which was the last day of practice, the long-awaited warm front finally hit. The water temps skyrocketed, and all the big females who'd been waiting to spawn charged the bank like herds of buffalo.

"When the water started warming, I went back into the pockets where I'd found (those old) beds," he noted. "The first pocket I stopped in – you had to go through all these little ditches to get back there.

"When I went in, I saw about a 5- to 6-pound fish swimming in front of the boat and going into this pocket. When I got in there, I started looking and the beds were all clean – there were bucks on every bed.

"I said to myself, 'Guys, your girlfriends are on the way.'

"The next morning, they were there."

That area that Clark had found became his primary area all 4 days. The first morning started quickly.

"I had found two 9-pounders and a 6 locked on," he said. "I marked those and went there the first morning and on my first three casts, I caught those three fish." 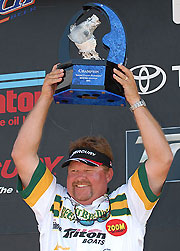 
Clark credited his decades of sight-fishing experience as the main factor in his success.

He filled out his bag and weighed a 39-06 total. He was 4 pounds ahead of Alton Jones, but Jones was DQd a few hours later. That increased Clark's lead to 6 pounds.

He noted he actually had three pockets within the area. There were a few competitors in there, but no problems territory-wise.

He weighed 29-05, which was 10 pounds less than the previous day's total, and his lead was cut to 5 pounds. A number of local boats began working the area, and he eventually left out of frustration.

Day 3 was similar. He caught 23-15 but it was again a struggle. His area was depleted through local pressure and his own. He wanted to leave.

"I was going to pull the plug," he said. "I had an area where I'd found some big fish the second day of the tournament. I was going to it and the wind got up. I couldn't go to it."

So he went back to his main area and worked it slowly. His competitors struggled too, and he stretched his lead to 9 1/2 pounds.

Day 4 was the money day. He knew his area was dying, so he decided to start on the area he couldn't reach on day 3.

"I went to the good area I'd found before and they were gone," he said. "I guess the wind came in and they left.

"I really struggled. I (wound up) going through the area I'd been fishing the whole time. More fish had moved in. And I got frustrated. I found two 6s on a bed that I couldn't get to bite. It was hard to get them to bite that (last) day."

Frustration or not, that was it. He worked the area to death, caught 23-05 and won by almost 8 pounds.

Clark said there was manmade structure in his area. "I think at one time it might have been flooded rice fields. There were levees all the way around it. It's like a maze when you get in there. And it held a lot of fish."


Clark said that, by far, the Zoom Big Critter Craw was his go-to bait.

He looked for both shallow and deeper beds. "I started on the shallower beds – the easiest ones to see. I thought if I caught all the shallow fish I could catch, I could fish the deeper beds that were harder for other anglers to see on later days of the tournament.

"It worked out perfect. (On days 3 and 4), my fish were all caught deep except one."

He also said his bait choice mattered. "It definitely did. I caught every fish on a Zoom Big Critter Craw – pumpkinseed color. I threw other stuff at them, but the Critter Craw did it better than anything, by far. Why, I have no idea."

> He also used a scent product. "They're not one of my sponsors, but I believe in it. It's Mr. Goop, made down in Tampa. It's like Vaseline. I put that on every Craw – from the head to the end of the Craw. I was very generous with it. I think it made a difference when it came to fish holding onto the bait."

> Main factor in his success – "Just years of experience sight-fishing in Florida. I get to do this for 6 or 7 months out of the year in Florida. It starts in November and they bed all the way through the northern St. Johns River to June. I love doing it, and have a lot of practice at it. My dad taught me to do it when I was 8 or 10 years old. I've been doing it my whole life."

> His father is L.E. Clark – the historic terror in north Florida tournaments.

> Clark uses a pushpole to work his way through spawning coves. It's a pole-vault pole that he acquired after it was broken. "I didn't use it to maneuver through the shallows," he said. "When I came up on a bed, and I thought it had fish, I'd drift up, then stop myself with the pole and push myself back. You don't want to spray mud all over it with your trolling motor."

> BassFan News is brought to you by Rapala..