BACK
Rojas Finishes 3-13 Back 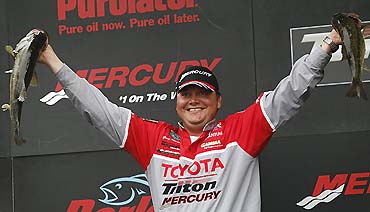 Greg Hackney's third 20-pound sack in 4 days was more than enough to secure the win at the Rayburn Bassmaster Elite Series.

Everybody knew that if Greg Hackney caught another 20-pound sack today, he'd be just about impossible to beat. He did it with 8 ounces to spare, and the Rayburn Bassmaster Elite Series became the second tour-level victory for an angler who's already among the finest in the sport, but still seems to get better all the time.

His 20-08 bag was the best in the field on a drizzly day 4 and gave him a 4-day total of 79-10, which was nearly 4 pounds more than his closest pursuer and more than 11 pounds better than everyone else. Dean Rojas did everything right all week and caught an impressive 19-08 today, but still came up 3-13 shy with a 75-13 total. Nobody else was remotely close.

Here's how the rest of the final Top 12 field finished:

If you'd told the 105 anglers in the original field last week that the winning weight here would be just shy of 80 pounds, many would have laughed out loud and some would have assumed you were on drugs. No way Rayburn could pump that out right now – for anybody.

A high percentage of the fish were spawned out and hidden away, and the weather pattern was unstable. But mostly, Rayburn was worn out from a long list of tournaments that had passed through – its own, as well as those originally scheduled for nearby Toledo Bend that had been forced to move due to that lake's dearth of water.

The Hack Attack showed them though. He's established himself as one of the top anglers in the world over the past 2-plus seasons and is No. 2 in the BassFan World Rankings. He had a lengthy stint in the No. 1 slot, and dropped because of a revision of the mathematical formula that brought VanDam's two Bassmaster Elite 50 wins last summer into the mix.

And when a stick of that caliber fishes as well as he can – maybe as well as he ever has – then everybody else is casting around for 2nd place. And that even includes the great VanDam.

Hackney, who isn't highly emotional to begin with, was rather subdued in the wake of the victory. It was almost as if it was preordained and there was nothing he could do to screw it up.

"I fished pretty good and I moved pretty good," he said. "Today was much tougher than the other days and I had to kind of grind it out. But I stayed with my guns and kept thinking it would happen, and (the bites) finally came."

He said this victory was different than his first tour win (last year's Table Rock Bassmaster) because he didn't know that one would be his until the final numbers registered on the scales.

He's finished 4th and 1st in the first two events of the season, but said it's far too early to concern himself about the Angler of the Year (AOY) chase. He won that honor on the FLW Tour last year, but he's a Bassmaster-only pro in 2006.

"I'm not going to say it never crosses my mind, but my goals right now are to make every tournament a good tournament and get back in the (Bassmaster) Classic. I'll start worrying about the AOY probably at about the Potomac (in August).

"It's a long year and there's a lot of tournaments to go."

Details of his winning pattern, as well as those of the 2nd- through 5th-place finishers, will be posted soon. 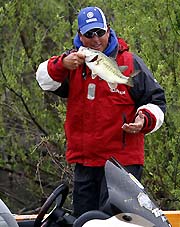 
Dean Rojas fished as well as he could, but it wasn't quite good enough.

2nd: Rojas At a Loss

Rojas said he fished about as well as could have if he'd scripted the event beforehand. It wasn't quite good enough this time.

"I don't know what more I could have done," he said. "I was pretty much perfect all week – I made good decisions and I didn't lose any fish. I just got beat.

"I wouldn't even know what to change. For what I was doing and what I feel comfortable doing, I felt it was the right pattern to win with. It just didn't work out."

He caught 10 keepers today, the biggest of which was 5-02. He'd underestimated his bag by about 3 pounds, but he knew he didn't have enough shortly after he arrived at the launch.

"Hackney idled past me and smiled, and I thought, 'Oh, man.' That was the last nail in the coffin and I knew I wasn't going to win.

"He gave me the old smirk, and for Hackney, that's quite an expression."

Rojas was pleasantly surprised that his own weight ended up in the mid-70s, and even more surprised that someone whacked nearly 80. "I didn't think it would take that much," he said. "Eighty pounds is strong on a lake that's been beaten up by all the tournaments." 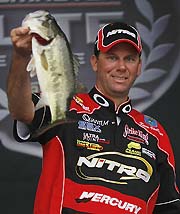 
The fish that Kevin VanDam was on over the last 2 days weren't of suffficient quality to win.

"(My fish) just got smaller, and the adjustments I tried to make didn't work for me," he said. "My stuff was falling off, and I did the best I could for what I had. I just wasn't catching those quality fish."

He lost a couple of fish that would have gone to the scales, but doubts that would've made a difference in his final placement. He gave a tip of the cap to both Hackney and Rojas.

"I didn't fish to the best of my ability, and Dean and Hackney both did extremely well. I don't think I could've done much better. I might have been able to scare 2nd place, but the fact is that Greg caught them better."

It was his sixth consecutive Top 6 in BASS events – a streak that started last year with wins in the two Elite 50s and the 2005 Bassmaster Classic – but that means little to him.

"I try to win every week," he said. "I'm glad I'm doing well, but I don't look at that as a streak or whatever. I just try to do my best every week."

4th: A High For Lowen

Lowen, a first-year pro from Ohio, garnered a Top 5 in his second event. He was 39th the previous week at Amistad.

He fished both the Bassmaster Northern Opens and the Northern Everstarts (now Strens) last year in an attempt to qualify for one of the major tours. He made it in both.

"I had to make a decision," he said. "My dream has always been to fish in the Classic, so here we are."

He's a bit surprised by his early success. "My whole goal when I started was to try to make the cut every time and be consistent. I've exceeded that a little bit so far.

"This is definitely going to help. It's a little bit more fuel for the fire."

Browning hadn't made the Top 10 in a tour event since 2001, so he was understandably thrilled with his finish.

"It's been a long time, and it feels pretty dang good," he said. "I actually got a little tip from Hackney that really helped me – he told me to slow down. I have a tendency to get in too much of a hurry.

"The other key was versatility and not getting committed to any one area. I kept bouncing around."

He used several different baits. He flipped a jig around cypress trees and threw a spinnerbait the first 2 days, then switched to a Yamamoto Senko and a Berkley Gulp! Sinking Minnow for days 3 and 4.

"I'd established a pattern in practice with the jig and the spinnerbait, then that kind of faded away," he said. "So instead of living and dying with it, I fished with an open mind and tried something else."

"It was kind of disappointing because I just never got into a rhythm, and the big fish didn't seem active in the areas I was in today."

> Lowen almost qualified for this year's Classic. He finished 5th at the Federation National Championship, but had the misfortune to be in the same division (Southern) as winner Anre' De Villiers of South Africa.

> Jordon took big-bass honors for the second time in the tournament today with a 6-12 hawg.