Since the very first day it was announced last August, the new Bassmaster Elite Series was embroiled in controversy. Some longtime pros said they wouldn't fish it, and stuck to their word. Others loved the idea and couldn't wait to start. Still others wondered where they'd come up with the $55,000 in entry fees, plus another $25,000 to $30,000 in expense money.

And there were those who seemed convinced the entire enterprise would fail.

And so it went for the better part of 6 months. Through it all BASS stuck to its gunwales with the clear statement that the Elite Series represents the future of the pro sport.

It all became a reality last week at Lake Amistad in Del Rio, Texas, and the reactions of the pros BassFan spoke with were overwhelmingly positive.

From the choice of the fishery itself, to the new boat check-in and registration (where the public can view more than 100 wrapped rigs), to the job BASS did promoting the event locally, the pros had mostly good things to say.

BassFan asked a number of Elite Series pros: What was the atmosphere like at Amistad? Did the first-ever Elite Series feel any different then last year's Bassmaster Tour?

Here, in no particular order, are their responses.

"The town was awesome, the crowds were great, the atmosphere was awesome – it's big-time – and I liked the new format. The Top 50 making the cut to the third day allowed me to get to 3rd place. I was in 37th, 30th, 7th then 3rd. I think it's important to give a guy a chance to come back.

"I don't have a wrap sponsor, so I have a military wrap that I paid for myself – Army, Navy, Air Force, Marines – and it says, 'These colors don't run.' Believe me, it was big around here. I had Marines and Air Force people following me - waving the flag when I caught a fish. They signed the flag and I took it onstage."

"I'm not sure how (BASS) is promoting everything, but there sure was a bunch of people at registration. It was pretty crazy how many people were out there. It felt different.

"Before this, I'd never fished a tour event with BASS – only FLW. It's definitely a different experience with the fans."

"Is it a different atmosphere? Absolutely. My hat's off to BASS. The opportunity they're giving anglers to market themselves is phenomenal. We had a huge crowd turnout. And they're putting us on lakes where I really feel our skills can come out.

"I think (BASS VP and GM) Don Rucks did one heck of a job putting together the finest BASS schedule I've ever fished. Besides that, the autographs and everything was set up for us. We had plenty of opportunity to promote our sponsors and ourselves."

"The neatest thing for me is the smaller field (106 boats). That really changes the dynamic of a tournament. With a larger field, by day(s) 3 and 4, the whole thing's beat up – it's almost impossible to find fish.

"With a smaller field, there are still fresh places that haven't been hit. That frees you up to go find fish during the tournament and not worry about running up on somebody else. I love that feel."

"This is the next level that we've all talked about. I've signed more autographs here than pretty much any other tournament except the (Bassmaster) Classic. The crowds are huge, the people are friendly, and the boat check – that was a huge deal.

"It's going off big. BASS is, I think, taking us to the next level where we need to be. You feel the difference with 100 boats out there vs. 150 or 175. The weigh-ins seem to go a lot smoother, and the anglers aren't mad and irritable."

"A different atmosphere? I think so. It's a smaller group of people, and you can feel the integrity there. There's something to be proud of to be part of this group. There's some honor – some integrity.

"Everybody's in a wrapped boat – they're responsible for their actions. People aren't going to do the things they do in bigger tournaments or smaller trails. I believe it's the utmost level for sportsmanship and integrity. 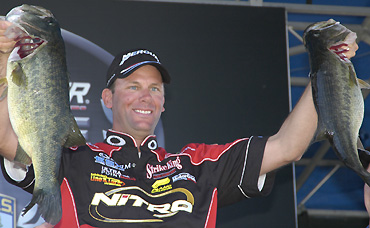 
Kevin VanDam said the event was "the utmost level for sportsmanship and integrity."

"It's sort of like the way it was when we had the Top 100s. You can already feel that here."

"Yes, definitely it's different. The crowd was enormous. I've been signing autographs the whole week I was here – even practicing. The crowd has never gotten into a tournament like this first Elite event.

"I don't know what to compare it to – maybe like NASCAR, when the racers show up and everybody wants an autograph. It was advertised on radio stations here. You see it on every channel on TV. There's newspaper articles. It's the real deal."

"Without a doubt (it's different). It's so neat to see all the boats wrapped the way they are – really, it's a spectacle. Everybody has their own unique wrap to fit their own personal style. The guys have beautiful jerseys.

"I think they've promoted this event more than they've done with the Tour in the previous couple of years. There was so many people at registration – taking pictures of boats, trucks."

"There's a feeling of excitement I have not felt personally for a long time. I think we're really on the edge of a lot happening – hopefully it's a good lot. BASS has put a lot of effort into making us feel special, and we should for this kind of money. But they've got a lot on the line too.

"We need another level of this sport. We need more excitement in this sport. I think BASS has done the right thing by putting us on waters where we can catch a lot of big fish, which may grow the TV audience, which is what it might take to reach the next plateau.

"I hope for everyone's sake that we get the ratings up in bass-fishing tournaments on television, and the opportunity to have more money in the sport."

"It just looks a lot more professional – there's so many bad-ass rigs. We're not weekend tournament anglers showing up on our own. This is truly a professional event going on.

"The fans see it, and they know what's going on. The weirdest part for me is there are so many guys I don't know. I'd say 30% of the people – I don't know who they are. And you have all these different wraps. Trying to decipher them is a little confusing right now."

"They're really doing a great job here. There was all sorts of fans. (BASS) really did a good job. They're treating us great, and making it a big event.

"It feels really big. There were a lot of people at the weigh-in for being in the middle of nowhere. BASS did a good job promoting it, even out here."

"I'll tell you, when we went through registration, there must have been 300 or 400 people trying to get autographs. It's a really cool deal. BASS is doing a really good job here."

"I had a few fishermen around me, but it wasn't anything, really. This (smaller) field is a whole lot better than a 200-boat field, for sure."