Which Day Is Most Important? 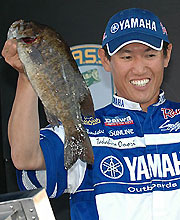 You're fishing the Bassmaster Classic on the three rivers in Pittsburgh. You have 3 days to win the biggest tournament in bass fishing. But which day is most important? All three? Sure. Day 1? Absolutely. Day 3? Maybe.

It's not as cut and dried as you might think. Consider George Cochran's 15-05 record-low Classic-winning weight on the Ohio River in 1987. He separated himself on the first 2 days and could have zeroed on day 3 and still won.

In view of the at-least-as-tough water this year, we asked a few pros what days they thought would be most important.

Kevin VanDam
"All 3 days. It will be real important to be consistent here. But day 1 is critical."

John Crews
"I don't think it's the first day. It can be, but here it doesn't have to be. Here you can zero one day and come back and catch 10 pounds (on day 2) and be in the Top 3 – if you don't let it mentally defeat you. That's the key."

Jay Yelas
"Day 1. In this tournament it's most important, but not in every tournament. In this one there are so few fish that the easy ones to catch up around the shallow cover will be picked off (today). They won't replenish. I think we'll see the biggest weights (today), especially since the weather isn't supposed to change for 3 days."

Aaron Martens
"The first day because everyone will catch all the fish that day. In pre-practice, the fishing got progressively worse every day, just from so many guys hitting the key banks. The more aggressive, bigger fish will be caught (on day 1). There's just a lot less fish here."

Greg Hackney
"You can look at it two ways. It could be (today) or Sunday. For me, as tough as the fishing here is, it would really help to have a good first day. It doesn't have to be great, but it has to be good – to keep my confidence going. Of course, if you're in contention to win, you want a good day Sunday. But I guess (day 1) is most important."

Takahiro Omori
"The first day because the easy fish will get caught the first day. After we catch those fish, there won't be much left. And I don't think the fish will replenish enough every day to catch more the next 2 days."

Mike Reynolds
"I will say this, there will be awesome drama that last day. Usually the leader going into the last day almost always wins the Classic. But I don't think that's the case this year. I think it'll be won with a big move on the last day."