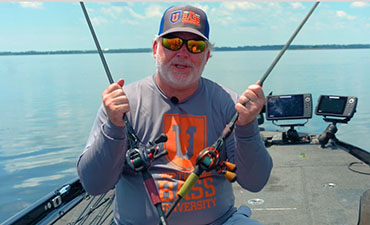 As we get firmly entrenched into the hottest part of the year, some regions of the country have long been in the post-spawn phase and others have just freshly entered it, but regardless of where you are on that continuum Pete Gluszek recommends that you have at least a couple of frogs on the deck of your boat.

“If you’ve never caught a fish on a frog, this is the time I want you guys to get out there and practice your frog-fishing,” he said. Vegetation is thick, baitfish are congregated up in the canopies, and the bass are right there with them. Some of you may prefer a hollow-body frog and others like a buzz toad, but Gluszek said you don’t have to choose.

“I throw both,” he explained. “The hollow-belly can trigger strikes in scenarios that the buzz toad can’t. The opposite, of course, is also true. He likes the latter presentation when he has massive expanses of water to dissect and the water temperatures are in the 80s or higher. “I can cover the water extremely efficiently.”

As he chunks and winds, he’s trying to find irregularities in the canopy. “One of the things I really like to see in the grass is holes,” he explained. They provide lots of ambush opportunities for hungry bass and typically represent some change in the bottom – it could be a difference in hardness, composition or depth, among other factors.

On tidal waters, he’s especially excited for low water, whether it’s first thing in the morning or during the heat of the day. “Low tide is frog tide,” he explained, as the grass mats up and the bait retreats even more tightly to the cover provided by thick vegetation.

When he employs the hollow-body it usually forces him to slow down. A lesson that he learned from Ish Monroe when they were paired up in a tournament is that while an aggressive retrieve pattern can be productive, in many circumstances the opposite extreme is preferable. “Oftentimes less is more,” he said. When you burn it back, it’s harder to dance as seductively. There is one easy modification you can make at home or on the water to help it walk better: “If you’re having trouble, you can cut those legs down real short.”

If the fish miss your frog or toad, resist the temptation to set the hook powerfully. That just pulls it out of the strike zone. If instead you can keep your retrieve going, the bass will frequently come back a second or even a third time, and those attempts are often more successful. Make sure that you stop the lure at likely ambush points, but also try to dial in that day’s specific preferred cadence. Once you figure it out, you’ll be surprised at how often you can call your shots.

If you want to learn some of the other secrets to how Gluszek determines which frog to use and where to use it, including why flopping catfish are often a sign of good things to come, check out his full on-the-water video, available only by subscribing to The Bass University TV.