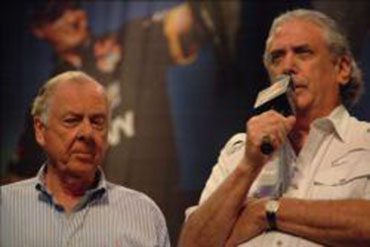 T. Boone Pickens, the billionaire oilman from Oklahoma who bought a stake in FLW nearly a decade ago, died today at age 91. According to various reports, he'd been battling strokes and suffering from head injuries incurred in a fall two years ago.

Pickens (at left in photo with late FLW founder Irwin Jacobs) became an FLW investor in August 2010 and Tour veteran Randy Blaukat represented the Pickens Plan (a series of coordinated steps designed to wean America off of Middle East oil) on the circuit the following season. Pickens contributed $100,000 of his own money to the champion's haul for the 2010 Forrest Wood Cup, which was won by Kevin Hawk at Lake Lanier in Georgia.

With Pickens' added money, Hawk garnered $600,000 for the victory. That's double the amount of the top prize that exists in pro fishing today.

Blaukat recalled a day when he visited Pickens' 100,000-acre ranch with Jacobs and spent time fishing with the tycoon on one of the more than 100 ponds on the property.

"He was really laid back and down to earth," Blaukat said. "Somebody with his resources, you might think he'd be full of himself or standoffish, but it was like fishing with your grandpa. I had a really good time.

"What impressed me, with his background in big business and oil, was his awareness of the need to transition to green energy. That's a rarity."

It's not known how big of a share in FLW that Pickens purchased. Son Michael claimed Pickens had invested $10 million in the organization in a 2014 lawsuit filed against his father, but Michael Pickens was known to have longstanding addiction and legal issues.