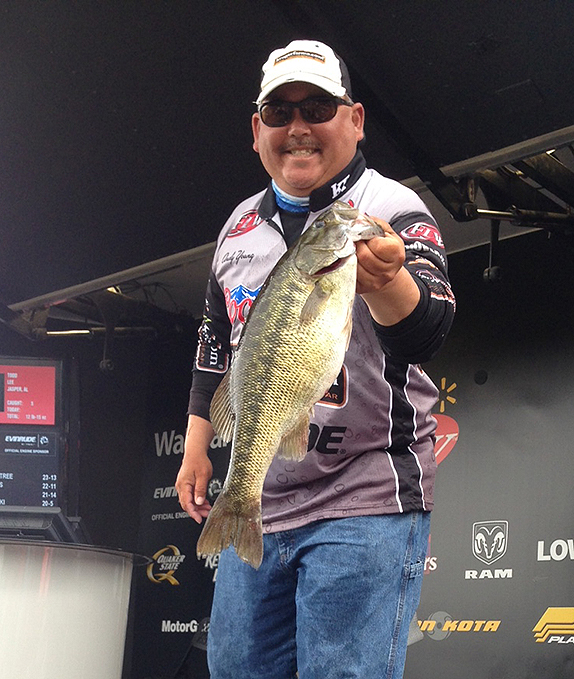 Like a lot of his competitors, Andy Young spent a good portion of day 1 of the Smith Lake FLW Tour trying to pick off fish that had already move onto their beds to spawn. In practice, he located roughly a dozen fish that he hoped would still be around when the competition got started.

He made them a priority to start, but the plan didn’t result in any big bites.

“I went after schoolers first and didn’t get anything going,” said the Tour rookie from Mound, Minn. “I ran all of my spawning stuff and caught a limit, but nothing decent.”

After spending five hours doing that, he changed gears to a jerkbait pattern around docks that he picked up on in practice. He caught some decent spotted bass toward the end of the day that way and culled his way up to 12-10 after day 1, which put him in 49th place.

“Those spots were suspended under docks in 15 to 70 feet of water,” he said. “I caught some suspended over 100 feet. It was really cool. It didn’t seem to matter how deep the dock was. They just were using them as structure.”

He stuck with the jerkbait program on day 2 and it produced 15-10 for him, good enough to move him up 27 places to net him a 22nd-place finish.

“I said, ‘Heck with the spawners,’ and went after jerkbait fish all day,” he said. “I kept my bait wet and didn’t run around a whole lot.”

He figured he put 25 fish in the boat each day, using mostly a Biovex Amp Stay 80SP and Duo Realis 110SP.

“It just goes to show that it’s a great lake and a fun lake to fish, for sure,” he added.

The Sunline Strong Performer, which focuses on the angler who makes the most significant single-day move in the standings at each tour-level event, is brought to you by the great people at Sunline.