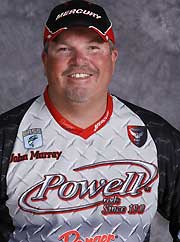 I'm pretty happy with my finish. Obviously, I'm not happy with today, but overall, it was fine. The day was cut an hour short because of weather, but I don't think an extra hour would have helped. Those fish I committed to – there was nothing else I could catch there.

But that's pretty much my M.O. – I like to get in an area and milk it for all it's worth. I didn't know the lake well enough to have a backup pattern I had confidence in, so I stayed with what I thought might work. It didn't.

I feel like I caught the most of anybody up that far. I ran way up into Mexico, and there was no one else there in the Top 12. I won that part of the lake, which isn't worth much.

For one of my patterns, I was Carolina-rigging creek channels and deep grass in 25 to 30 feet. I was using Powell rods and throwing a reaper and a Yamamoto Ika. The reaper's about 20 years old – I don't know who poured it.

My other pattern was flipping a Reaction Innovations Sweet Beaver to wood and trees in the backs of pockets. I could catch a lot of keepers, but only a couple of real good ones that way.

Today was okay. I caught them early again Carolina-rigging, then I went to my flipping pattern after about 10:30. I never culled any more fish.

It was frustrating, because I thought I might catch another big one in the heat of the day. But the fish really changed. I think it was the warm wind. They started acting a little different.

Before, I could flip a bait in and they'd bite it. Now they're chasing a little more. The weather's really changing their moods right now.

Tomorrow I'm just going to go and pretty much do the same thing. I'll try to stick it out in my best area. And maybe I'll do some finesse fishing in one area.

I have one area where I caught all my big ones, and I'll fish it a little harder. I'm throwing the kitchen sink at them tomorrow – a Carolina-rig, deep spinnerbait, and I'll probably go to a dropshot.

I know they're there. It's just a matter of getting a couple of them to bite.

My travel partner Skeet Reese got the flu last week, and I got it at midnight on Monday. It's still that thing going around from the Classic.

I went out all day on Monday, and caught plenty of fish, but I didn't have the size yet to do well. I caught a 6-pounder on my first cast, and things went downhill after that.

There are a lot of areas with bedfish, but it's been so windy, it's not easy to see a lot of them.

It's sort of like Lake Mead here, where part of the lake is pre-spawn, and other parts are still a little too cold.

I'll just go out on day 1 and see what stage they're in, but I think you're going to have to do a couple of different things. We're on the front side of the spawn, but it definitely hasn't happened all over the lake.

Everyone's real excited to be here. To come back to a place like this is a super feeling.