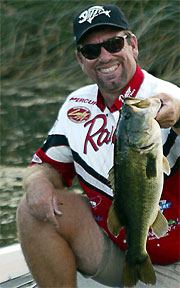 Gary Dobyns says a frog is a great bait for lots of big fish.

(Editor's note -- Although this spot focuses on fishing tips from tour pros, from time to time we make an exception. Here's one of those times.)

Does froggy go a-courtin'? If you're a California bass angler, you'd have to answer: "Oh yeah!"

On the Left Coast the "scum frog" or "rat" is big -- because "it's an absolutely awesome big-fish bait," says Gary Dobyns.

Dobyns is one of the best pros ever to come out of the West, which is no small statement. So far he's chosen to eschew the travel associated with fishing the East-based tours, but it isn't from lack of talent. In fact, whenever he's in a tournament out West, people actually expect him to win it.

Here he gives BassFans his take on frogging.

"I haven't been anyplace I haven't been able to catch fish on a frog," Dobyns says. That includes the 1999 BASS Masters Classic, which he qualified for through the Western Invitationals. That was on the Louisiana Delta. He finished 33rd because he "lost so many fish. I had horrible luck, but they ate the bait well."

But back to the West. Frogs are "very strong" there, he notes. "You can't hardly find someone in the West on Clear Lake or the Delta who doesn't have one tied on. It's that strong a bait for us out here." In fact, the bait is so popular in the West that Gamakatsu actually came out with a replacement hook for frogs, which Dobyns now uses.

The best season for frogging "is from about mid-April through November," he says.

The frog bite is slowest at the beginning and end of that stretch, but those slower times are his favorite times for throwing it. "It's known for being a summer bait, but I like it in April and May, and November, because that's when a lot of people don't throw it and I catch lot of big fish on it then."

Many people see frogs as a one-trick pony, but not Dobyns. He acknowledges that it is a topwater bait made for fishing on top of cover (grass, moss, mats, etc.), and that's how he uses it most of the time. "But it's also a great bait to walk off the mats," he says. "I fish it off the mats and pop the rod tip a few times to make fish come out," he says. "I catch a lot of fish on it in open water."

He also notes that you can fish it "really slow or really fast," and it will catch bass.

Popping it, for that stereotypical frog-like action , is by far the most popular way to fish a frog. But Dobyns prefers to walk it like a Spook.

"I like to pop the rod tip and make it swing side to side, like it's walking," he says. But if he's on top of a thick mat, he'll have a pull, pause, pull- pull, pause retrieve. "I'll just make it walk really slow," he says.

But he reiterates that there appears to be no wrong way to fish a frog. "I've actually had guys catch them by a straight retrieve in open water -- just by making a wake. And some people make it bounce straight toward them.

"I fished with (Ranger Boats founder) Forrest Wood on Clear Lake once, and he fished his frog really fast. He reeled it for 5-6 feet, then stopped it. Then he reeled it another 2-3 feet and stopped it. Then 5-6 feet again. I thought he as never going to catch one, but he caught the first one and caught the crap out of them that day.

"So I don't know if there's a right or wrong way. I just like twitching and stopping it, and walking it."

As frogs are relatively bulky baits which often have to be fished with a layer of thick cover between it and the bass, the hookset is key. Here's what Dobyns has to say about that.

"On mats, if they blow up on it, don't set the hook if they don't eat it," he says. "I watch my frog closely. If it goes under, I'm swinging. I don't wait to feel the weight like some guys do because sometimes they'll spit it on you. Wait just a fraction of a second, then nail him."

The name of the game with any lure is hookups, and that's especially key in frogging. To make sure he gets every one he can, he uses braided line and a flipping stick. That way you "don't lose many fish if they eat it.

"You're also fishing in heavy grass so you don't want that fish running into that stuff anyway," he notes. "You want to hit him hard and crank him in."

The 1/2-ounce Snag Proof Tournament Frog is his frog of choice because it works for him and he has confidence in it. When it comes to color, he throws only three: white, black and green.

He modifies all of his frogs by changing the hooks, thinning the legs and making the legs "exactly even," which "makes it easier to walk."

On the white frogs he likes to "break up the body a little. I'll use a black marker on the body."

> As far as where to use frogs, he recommends cover that's too thick to fish a Yamamoto Senko.

> More on his Classic frogging experience: "I was fishing mats there, but I had one of those tournaments where it seemed like you'd lose them faster than you could get them on. To this day I don't know how I lost that many fish. I had a horrible tournament. I probably was a little quick on the trigger -- excited about being there, and swinging a little fast -- but they ate the frog well. Gary Klein was catching his fish on a frog too. I would love to have another shot on the Louisiana Delta with that Snag Proof frog. You just have to watch the alligators because they love it. The sky's the limit on how many alligators you can catch if you wanted to."

> He hasn't fished much back east, but noted that he's done well with a frog on Alabama's Lake Eufaula. "I caught some good frog fish there, in this tall, weedy grass along the shoreline," he says. "But I haven't gone anywhere where I really couldn't catch them on it if there was any kind of vegetation. It's all about having the confidence to throw it."

> "You can catch a ton of fish on frogs, but you just have to have faith in them."

> "Fishing a frog is the most exciting topwater fishing there is," he says.