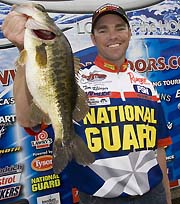 Whenever a hot new bait hits the market, it's not long before anglers start trying to modify it in an effort to make it even more effective in specific situations. FLW Tour pro Tim Klinger had never fished a Rad Lures Chatterbait prior to the Okeechobee event in January. Almost immediately, he customized it for flipping and pitching into brushy areas.

"I found a lot of fish that would chase a jig, but they wouldn't eat it," he said. "So I took a Chatterbait, ripped the skirt off and put a Yamamoto Twin-Tail Hula Grub on there.

"I'd pitch it back into the holes, let it drop down and work it out. I think the blade on the Chatterbait and the Hula Grub make it seem more like a crawfish running out of there. They hit it pretty good."

The Chatterbait played a major role in several wins and high finishes at Florida tournaments early this year. It's primarily used much like a spinnerbait, but its unique blade design produces much more vibration than even the largest Colorado blade.

Klinger threw it in its out-of-the-package form a few times during practice at Okeechobee, and came up with the idea for the alteration right away.

"Of the 10 fish I weighed in at that tournament, eight were caught on that bait," he said. "It's probably a combination of the vibration and just looking like a crawfish. That blade puts out so much vibration that the fish just can't stand it."

During practice for the recent event at Kentucky Lake, he estimated that he caught 25 fish on it. The fish thumbed their noses at it during competition though, which shows that it's like any other bait – effective at times, ineffective at others.

"I was making anywhere from 5- to 20-foot pitches to any opening I could see back there in the brush," he said. "Or I'd cast it over four or five bushes to get to a 5-foot open area. If I could find a little opening back behind the bushes, I'd pitch it back in there.

"Anytime the fish are in a semi-chasing mode, they're going to eat that bait. It's a matter of getting the right color down."

Which Color is Best?

The first Chatterbait that Klinger experimented with was white. He said he started catching more fish after he switched to black.

"I use mainly the black one with a blue Hula Grub," he said. "And a lot of guys have started taking a felt pen and making the blade black, trying to reduce the shine and make it so it's not so bright. It seems to work better when it doesn't reflect so much light."

It took him awhile, but he finally caught one on it at his home water – Lake Mead near Las Vegas. It was a 6 1/2-pounder.

Come this fall, he plans to use it at that lake's biggest annual event. "I'm looking forward to throwing it at the U.S. Open," he said.