Canterbury Likes A Pop-R In Post-Spawn 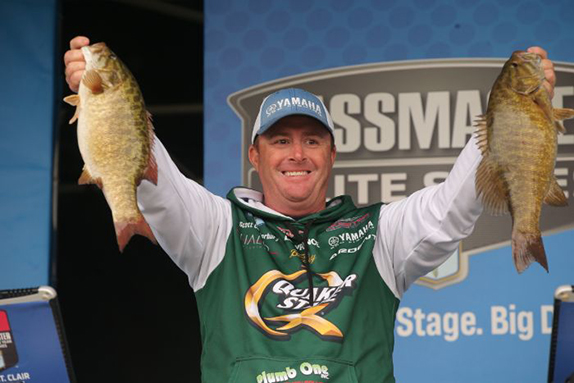 Reigning B.A.S.S. Angler of the Year Scott Canterbury prefers topwater fishing above all other styles and has great success with old-school Rebel Pop-Rs in the late spring.

The post-spawn is a time of year when a lot of anglers' favorite way to fish can also be the most effective way. Bass guarding newly hatched fry or resting up from the rigors of the reproduction ritual tend to spend much of their time in shady places and become susceptible to certain topwater presentations.

Scott Canterbury, the 2019 B.A.S.S. Angler of the Year, often chooses to exploit those fish with a Rebel Pop-R P70. The current-production model will work, but he says the original (which has a bit more heft to it and is easier to cast into tight confines) is the best.

"The biggest thing with it is the weight – you can cast and present the lure in a natural way, but you can land it softly to where it doesn't spook a lot of fish," he said. "It's heavy enough that you can get it into places where a lighter bait won't go.

"It's something that's always worked for me later in the spring. It's really good on a place like Kentucky Lake when the fish are still hanging around the bushes and I use it a lot on the Coosa River around boat docks. I'll throw it around anything that's overhanging and makes shade."

Get 'Em When You Can

Canterbury said he has about a dozen of the original P70s and he'll purchase any for sale that he comes across. He's not totally hung up on color, but he does have some favorites, with the versatile baby bass at the top of the list. He likes bone for off-colored water and chrome with a blue or black back when underwater visibility is high.

His line choice is 17- to 20-pound P-Line monofilament, either PF Original or the newer CXX. He ties directly to the bait (no split ring added) and will employ a loop knot if he wants increased side-to-side movement. 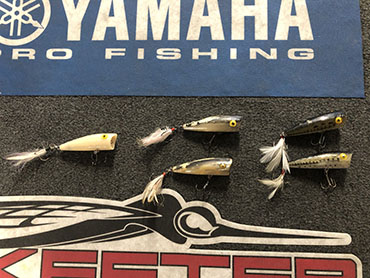 
A sampling of Canterbury's selection of original Pop-Rs, with the versatile baby bass color at far right and bone (effective in dirty water) on the left.

"A lot of guys have gone to braid (for topwater applications), but I'm still a mono guy," he said. "When a fish bites, I like to have that little bit of stretch."

He uses a 6'10" medium-action Halo rod with a handle that measures only 9 inches – the shortened gripping portion keeps the butt out of the way when he's working the bait. It has a considerable amount of backbone and a fast tip, but not extra-fast.

Each time that Canterbury casts a Pop-R, he lets the ripples created by the bait's settling on the water disperse completely before imparting any action. Some experimentation is often required to determine the cadence that the fish prefer on that particular day.

"Sometimes just a couple of slow chugs will get one to bite," he said. "With the P70, you can walk it back to you and as I move it way from the cover I speed it up a little. If you find that faster cadence is working, you can do it earlier in the cast as well."

As anyone who's done any topwater fishing knows, however, a lot of bass that bite surface offerings never get any closer to the angler than they were when they sucked in the lure. Hooksets that were too quick, too violent or a combination thereof have allowed many to slip back into their darkened haunts unscathed.

"I delay (the hookset) a little bit and I don't really crack them that hard in any case. I reel down and then lean back into them when I feel the rod load up. You can take it away from them real easy."

The pause until the rod load is felt sometimes leads to a chance that wouldn't come about with a forceful jerk after seeing the boil.

"Sometimes they'll swirl up on it once and won't get it, even though it looks like they did because the commotion of the water pulls the bait down. If you don't feel the fish and hold off, the bait will come back up and if you let it sit and maybe chug it again, the fish will come flying back at it.

"But if you jerk and the bait comes flying back over the boat, you never get that second opportunity." 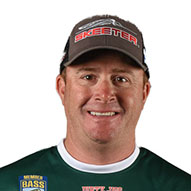