Grass, Rocks And Docks All Played 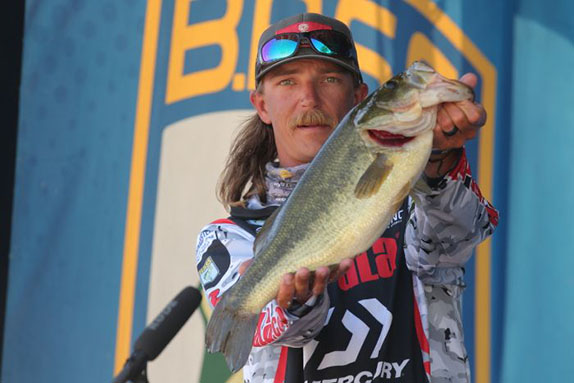 The Lake Champlain Bassmaster Elite Series offered up the same menu of successful techniques and similar weights as compared to past tournaments on the venue. Scattered grass and rocks on breaklines and flats held quality fish, as did heavier grassbeds and docks. Dropshot setups were a dominant technique, but crankbaits, jigs, Carolina rigs and the odd glide bait or wacky-rigged plastic produced good specimens.

The weather was a bit crazy, as rainstorms chased anglers around the lake on day 1, while days 2 and 3 provided calm and sunny conditions. Day 4 was a mixed-up meteorological stew of shifting winds interspersed with calm periods, a few scattered rain clouds and then harsh winds that kicked up just in time for the Top 10 anglers to pound their way back to the ramp.

Winner Brandon Palaniuk adjusted well to the changing conditions, catching 18 smallmouths and two largemouths that comprised his winning total, mostly with a dropshot.

Here’s how the rest of the Top 5 found success.

Seth Feider was one big bite shy of the win despite not losing any fish that would have helped and executing his plan without a hitch.

“I committed to practice up north in the Inland Sea part of the lake because it takes too much time and there’s more risk running south to Ticonderoga,” he said. “It turned out to be a good decision since it didn’t seem like the guys who made that run had more than 15- or 16-pound limits.

“I was looking for good largemouth spots, places with milfoil that was topped out, and I found six or seven good spots,” he noted. “I mixed in some dock-fishing too.

“After I had some good (largemouth) areas I went and found a couple good smallmouth spots too, since the largemouth fishing didn’t get good until late morning,” he added.

On day 1 he weighed all largemouths, as the smallmouth spots didn’t provide any specimens over 2 1/2 pounds. “I stopped fishing hard around 1 p.m. and went looking for other areas, but I didn’t find any,” he said. He landed in 4th place.

Day 2 was bright and calm, perfect for his largemouth plan. To his surprise, the smallmouths were active early and he got most of his weight before going to the green fish. He upgraded with a big bite before the day was over and turned in his best day of the event. He rose to 2nd place, partly on the back of the 6-06 brute largemouth he caught from a boat dock. That ended up being the big fish of the tournament.

Day 3 was a carbon copy of day 2, and again the smallmouth turned on. He left them at 8:30 a.m., but never upgraded much on the largemouths and sank again to 4th place, having made the all-important cut to the Top 10.

Day 4 was overcast with shifting, sometimes strong winds, and between the weather and his waning faith in his largemouth spots, Feider elected to chase smallmouth all day. The brown fish cooperated enough to again lift him to 2nd place to finish the tournament.

His smallmouth spot was a grass point in 10 to 12 feet of water on a big flat. He caught them on a dropshot and a crankbait. His biggest fish on day 4, a 4 3/4 pounder, ate a Carolina-rigged craw.

The largemouths ate a jig and a Texas-rigged craw-style bait pitched to grass and boat docks.

> He used a fluorocarbon leader because the clear water and somewhat sparse grass allowed the fish to see the braid too easily.

> He likes a monofilament leader on the Carolina rig because the leader is prone to develop knots when casting at times, and mono will not break as easily as fluoro when knotted. Also, sometimes the mono will help float the bait off the bottom a little, whereas the fluoro sinks. 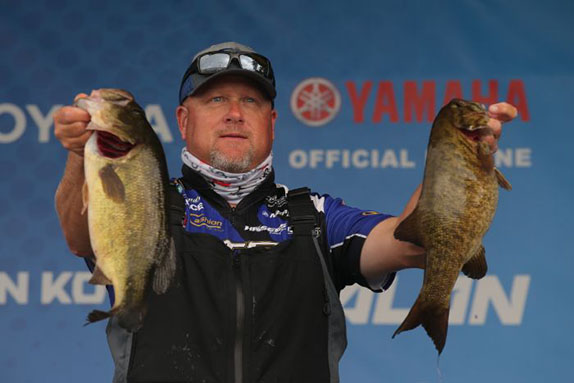 
Jamie Hartman topped the standings for the first three days before finishing in 3rd place.

Jamie Hartman weighed the tournament’s biggest bag on day 1 to take a lead he would not relinquish until the final day. Battery issues on day 3 may have torpedoed his shot at the win, as he lost over 90 minutes of prime fishing time and weighed his lightest bag of the event.

He’s a native of the area and had fished Champlain a fair number of times.

“I know the lake pretty well, so I didn’t have to practice real hard,” he noted. “I had an okay practice. I caught one here and one there, just checking spots I knew about mostly. Once I caught one and graphed a little, I left. I never knew how many were there or if they’d stay (until competition rounds).”

Many of those places were steep drops with rock and some grass on top in 12 to 15 feet of water and they produced mixed bags of smallmouths and largemouths. In practice they’d hit a swimbait, but they refused the offering on day 1 of the tournament.

Instead, he dragged his Carolina rig at a steady pace until he contacted the grass, then popped the weight over it. That’s often when the fish would take the bait, though it was often a mushy bite.

“I lost a lot of fish last week at the St. Lawrence River event,” he noted. “I felt they’d get the bait and stay on better with the Carolina rig.” He was right, but he lost 8 ounces due to two dead-fish penalties over the course of the tournament, since the fish took the bait so deeply.

He also weighed a few fish he caught on a dropshot setup, when the action on the Carolina rig slowed or he saw a fish on his graph that he could drop straight down to.

A rocky point he’d fished in years past, near the Plattsburg Marina launch site, became one of his key spots after a last-minute stop on the way back on day 1 produced a 4-pounder. 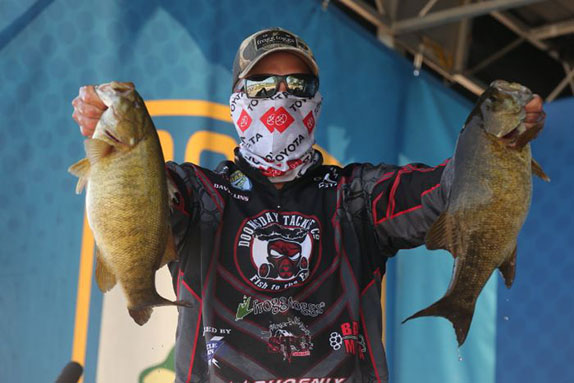 
David Mullins caught some quality smallmouths, but lost some that would've helped his cause on the final day.

Wind and clouds during the championship round fired up his shallow crankbait fish, so much so that the smallmouths acted like finned brown rockets once hooked.

“They cartwheeled, they jumped like tarpon, they porpoised,” he said. “They had nowhere to go but up in that shallow, warm water.”

He found the 10-foot deep flat in the first hour of the first day of practice when fish pounced on his crankbaits, but without fishing them hard he didn’t know how much weight was possible there. On the second practice day he ran around looking for largemouths but without luck, so he spent the rest of the day idling for hours looking for schools of smallmouths and found three groups.

The last practice day he went south to Ticonderoga, but couldn’t generate much action in the famed grass beds, and so wrote it off for competition.

“I started deep on day 1 and caught a couple on a dropshot, then went shallow and caught 19 pounds,” he said. “So I started shallow on day 2, but they didn’t turn on. Then on day 3 I started deep and got 18 or 19 pounds real quick. The crankbait fish didn’t bite when I tried them that afternoon.”

Day 4 brought the wind and the overactive shallow fish that proved how heartbreaking competitive fishing can be.

> Mullins thanked Cory Johnston onstage for helping him a couple years ago by giving him some lessons on Lake Simcoe on how to pattern and fish for northern smallmouths. 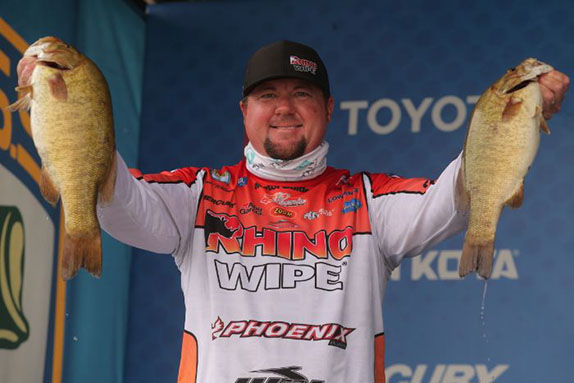 Williamson recorded nearly identical weights on days 2, 3 and 4, with day 1 being a pound off the average.

“I lost a few fish the first day,” he noted. “Other than that, I fished a clean tournament. I didn’t lose anything that cost me the win.”

He found his key spot during practice.

“I covered a lot of water and felt like by the second day I’d found all I needed for the tournament,” he noted. “The main place where I caught most of my weight (during competition) I found with my Lowrance SideScan. I made three drops and caught three fish. They weighed from 3 3/4 to 4 3/4 pounds.

“I knew there were a lot of fish there and when it got slick (like it did on days 2 and 3) I could use the trolling motor to move around until I saw them, and drop right down on them,” he added. “The last day with the wind I had to use the Lowrance SIDE Active Imaging to see them and cast to them.”

His best spot was a breakline with a few shell beds and scattered boulders. Most of his fish were in water 20 to 30 feet deep and all were fooled by a dropshot rig.