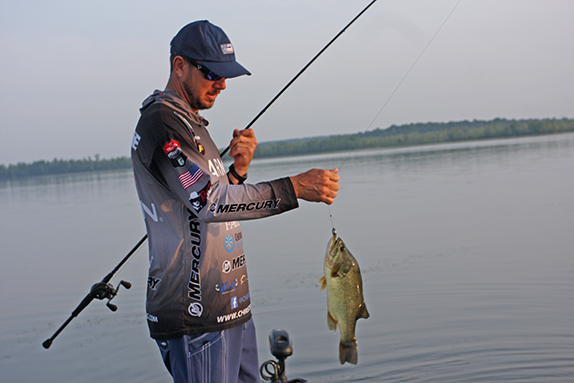 Jason Christie has endured his toughest Elite Series season to date in 2018, but still has a shot to make the 2019 Bassmaster Classic.

It was just after 7:30 a.m. last Tuesday and the sun was starting to climb over Oneida Lake in Central New York. At the same time, Jason Christie was doing his thing, pitching a beaver-style bait, rigged beneath a 1 1/2-ounce weight, into clumps of matted grass in a big bay across from Oneida Shores Park.

It wasn’t long before Christie cut loose with a powerful hookset, swiftly sweeping the rod up toward his right shoulder while simultaneously reeling up the line as fast as possible. On the receiving end was a largemouth bass in the 2- to 2 1/2-pound class, an average fish at Oneida, but also a bitter reminder for Christie of what could’ve been this season.

After he freed his flipping hook from its mouth and dropped it back in the water, Christie mentioned how catching a bass just like that back on March 18 would’ve swung the Bassmaster Classic outcome in his favor. He said it with a hint of repulsion in his voice as though every similar fish he’s caught since then forced him to relive the events of the final day at Lake Hartwell, where he let a 4 1/2-pound lead slip away and had to settle for 3rd, 18 ounces short of eventual winner Jordan Lee.

The latest came at the St. Lawrence River, where he finished 101st, his worst career Elite Series result and lowest finish since 2012 when he finished 128th at the Kentucky Lake FLW Tour. The triple-digit showing also knocked him down to 41st in this year’s AOY points, meaning the AOY Championship at Lake Chatuge later this month and possibly the Bassmaster Classic Bracket will determine whether he qualifies for a seventh straight Classic.

Normally one of the most unflappable competitors in the sport, Christie said the sequence of misfortunes has him in a bit of a rut mentally.

“I’ve always been one of those guys that for the most part whenever you flip a fish and the fish hits the side of the boat, most times that fish lands in the boat,” he said. “This year, that fish has hit the gunwale and bounced out. There’s such a fine line there.”

After finishing 36th in Elite Series points in 2013, Christie has steadily climbed the standings each season. He won’t call this season a step back, but it’s evident the Classic fallout has lingered all year.

“This year has been stories of it all,” he said. “I go from losing a couple that would’ve won the Classic to losing fish in general. I lost two or three (at the St. Lawrence) and am now potentially out of the Classic.

“The worst thing in bass fishing is when you look in the mirror. Doubt isn’t the word because I don’t doubt myself to this day or the way I fish. I’m like, ‘Can I catch a break at the right time where I get one of those big trophies?’”

Even if he fails to qualify for next year’s Classic along the Tennessee River in Knoxville, Tenn., he’ll try to turn it into a positive.

“Say I don’t make the Classic, look at (Justin) Lucas,” Christie said. “He didn’t make it last year and look where he’s at now [1st in points]. Honestly, I need a kick in the butt. Sometimes, we get out here and settle in. I’m one of those guys, though, that if I don’t make it it’s my own fault. Long term for my career, me sitting and watching the Classic could be the best thing for me even though I don’t take anything for granted because I know how hard it is to make the Classic.”

For Christie, the 2018 Classic couldn’t have started any better. He posted the first big win of his career at Hartwell back in March 2011 and after weighing nearly 21 pounds on day 1 of the Classic, the stars seemed to be aligning for another South Carolina celebration.

“All during the tournament, I felt like at any point a big wave would come to the bank to get ready to spawn,” he said. “I watched for that on day 1 and went into an area late and caught a 5-pounder and another 3 1/2.”

He followed the same sort of schedule on day 2, fishing drains and docks before visiting an area he called the spawning grounds later on.

“I had the same number of bites, but I lost two good ones late,” he said. “It was not a big deal because I had a big lead still.”

Heading into the final day, he opted to alter his strategy and start where he thought the fish would be coming to.

“After a warm night, I felt like so many times I had gone with same thing all 3 days or 4 days and I felt like I could switch and be ahead of them,” he said.

Rather than hit docks and drains right away, he started in the spawning area with a ton of confidence.

“I really thought it would be over in the first 30 to 60 minutes,” he said. “I go through there and don’t get a single bite so I missed that and the early bite of what I’d been doing.”

A couple hours later, he finally connects, but a 3 1/2-pounder comes off halfway to the boat. He was unshaken and figured more bites would come.

“We all know that didn’t happen,” he said.

The rest of the day was a struggle as other contenders closed the gap or passed Christie on the unofficial leaderboard.

At around noon, Christie pulled up to a dock that had been good to him in the 2015 Classic.

“I flipped a jig out and got a bite, but it tricked me,” he said. “He was swimming toward me when I set the hook. It was a 4- or 5-pounder. I catch that fish nine times out of 10, but that one time I don’t catch him the Classic is on the line.

“Since then, you start thinking, ‘How many times can I get kicked in the gut?’ You only get so many chances. Have I wasted all of my chances? Hopefully not, but you start thinking about that. In fishing, the more you think about it, the more chances there are for bad things to happen. I have to keep it super simple for me because I don’t want to think too much.”

Christie said the two- or three-week period after the Classic event went by without him giving much thought to what transpired on the final day at Hartwell.

With the Sabine River Elite Series, originally scheduled for April 6-9, postponed due to high water, the next event wasn’t until late April, but it was in Christie’s backyard at Grand Lake. Many considered him among the favorites there and he went in with a fair amount of confidence. Where better to shake off the bitterness of the Classic than on my home lake, he thought?

Nothing went as planned – he weighed in just three keepers on day 2 – and wound up 97th.

“That was embarrassing,” he said. “There have been probably five times in my career when I wanted to crawl under a rock. That was one and one was at the St. Lawrence. I just wasn’t getting many big bites. The first day I boated a few, but on day 2 I didn’t boat any of them. It was just a case of not getting many big bites and I just lost it.”

It was a foreign feeling, not being a factor at Grand, where he’d finished 2nd in the 2016 Classic and won an FLW Tour event in 2013.

“I don’t think I’ve fished a big event there where I wasn’t flirting with the top 10,” he said. “I told myself after practice if I don’t get on something really strong I’d put the trolling motor down and go into Wolf Creek and fish. I didn’t do that. I kept doing what I was doing. There were guys who finished in the top 12 who stayed in Wolf Creek. There are key areas that replenish in there, but I didn’t do that. I was convinced the fish would come in to spawn and I could sight-fish the whole time.”

The following week, Christie rebounded with a 4th-place showing at Kentucky Lake. Then, two weeks later, he finished 10th at Texas Fest at Lake Travis. He closed the regular season by sandwiching two top-30s in between a 94th (Sabine River) and his triple-digit disaster at the St. Lawrence River.

“My three worst (Elite Series) finishes have been this year and I still have a chance to make the Classic,” he said. 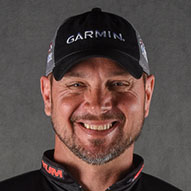