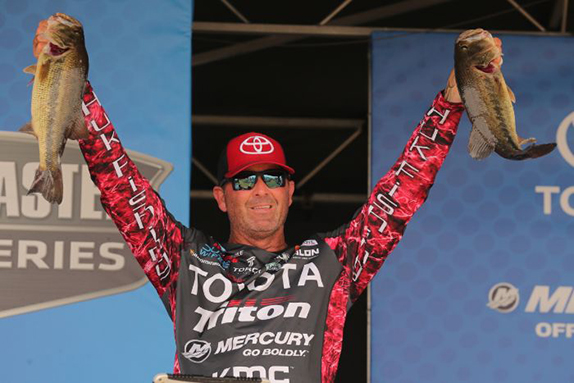 For Gerald Swindle, fishing creek channels has come natural to him since his childhood.

Any bass angler worth a Palomar knot knows the importance of understanding and properly fishing channel swings. The fact that Gerald Swindle has been one of the most consistent performers on the Bassmaster Elite Series is a testament to his upbringing. Fishing is all he’s ever known and it all began as a young kid chasing anything that swam in and around current.

As a child, Swindle played in the creeks near his home, catching crawfish and bluegill. He’d walk the creek realizing that the bend where the current was the fastest was frequently deeper. The banks were steeper and they would often be washed out underneath. When the water flowed fastest against the bank, stumps, trees, and rocks got pushed into that area, creating cover that would attract bass.

Once he became serious about his fishing, he realized how simple the process of catching crawfish was to apply to his fishing.

“Then, you get to Lake Guntersville, and you can picture South Salty Creek swinging in off the main river and how the channel lays out,” he said. “You understand why that hard channel swing produces more fish because for years it’s had more current on it, so it has a rougher bottom.”

From an elementary standpoint, Swindle believes that Mother Nature created the perfect piece of cover. That said, the onus is on the angler to delve into why fish relate to that cover.

“We have to use our imagination while looking at that channel,” Swindle added. “This is why it’s harder – the water swung against here and the bottoms always going to have more rock on it. It’s going to wash mussel shells and they’ll be more apt to be on top of that bar on the outside versus the inside swing where a lot of sand and debris will get washed up.”

Stumps, logs, and grass can also attract fish to the area. On certain river systems where the water gets too hot, finding a bend with sand on it can be very productive as Swindle believes the water is cooler there.

Given the opportunity to create the perfect channel bend, rock would be at the top of Swindle’s list.

“I’m not necessarily talking about boulders sticking way up that create a shadow behind them. I’m simply talking about a harder bottom whether shelf or slate rock where there is most definitely a hard place,” he said.

Once he’s found them using his Humminbird electronics, he’ll mark the school and figure out which direction the current is flowing and position his boat accordingly. Swindle’s well aware that current doesn’t get pulled every day, but bass have shown themselves to be creatures of habit.

“If a dog eats a treat, from the same silver bowl, 6 days in a row, that dog on day number 7 is going to want to look in that bowl. It’s elementary,” he said.

Swindle fishes the spot the way the current would deliver the bait.

“Don’t get lazy because they aren’t pulling current that day, it doesn’t matter,” he added. “Put your boat downstream and cast upstream. What you’re doing is standing in the natural flow of where the bait would come.”

Swindle pointed out that most of the time if there’s a tree washed in there, it‘ll blow the top of the tree and limbs downstream because they catch the most water. The trunk most times will be upstream and the limbs facing downstream. He suggests anglers throw to the limbs first and try to drag their offering backward.

He’ll position the boat off of the area and dissect the structure, making quartering casts.

Why Creek Channels are Important

Swindle says creek channels provide the necessary infrastructure for bass to travel from deep water to shallow water and to spawn.

“Everything relates back to the creek channel”, Swindle says. “They leave the river and go up through the bottom of the creek channel and stop on the bends and the points sticking out all the way into where they want to move into a pocket and spawn. Then, they’ll reverse the cycle on their way out.”

Deer hunting has taught Swindle well when it comes to understanding the pathways a bass might utilize. Anglers need to envision how bass travel deep structure just as a deer would as it travels through terrain.

“They travel down the creek channel because there’s cover, structure, and food. A bass makes their way up to top of the channel on a point, and then moves into a pocket to graze,” Swindle said. “If you ever watch a deer when they’re in a big field, they’ll always graze on a high place because it’s something different. That’s exactly where they spawn. Bass will do the exact same thing.”

Understanding how bass utilize creek channels is to understand how bass get from point A to point B.

“You have to connect the dots,” Swindle said. “There might be two primary points in a big bay. One’s hard clay sticking out a little bit farther in the pocket and the other has some shale on it or blow-downs with deeper banks connected to it.”

What is equally important is figuring out where they’ll stop along the way.

Swindle pointed out that something so simple as a gravel or chert rock bank; anything that provides a rest area for a bass that isn’t locked into where it's heading, but needs to stop along the way. Swindle’s well aware that these are the kinds of areas that can win tournaments. They’ll hold quality fish, especially first thing in the morning. A bass might be heading into spawn or on its way out, but these are key areas that anglers can’t ignore.

It’s important to understand that these fish have already eaten and are not hungry or are working up an appetite.

“A bass is an opportunist,” he said. “That’s just where they’re at and if a bait were in front of him it’s an opportunity to feed.”

He’ll fish a jerkbait or a small crankbait to draw fish out, but he won’t burn up his day on these spots since he’s likely only fishing for one or two bites.

Swindle has set up a run of spots like these many times, scratching out a bite here and there. Those are the kinds of places that anglers tend to ignore, not taking the time to swing the boat around and graph it when they should.

“You won’t catch 40 or 50 each day, but you’ll be able to make that run especially on a multi-day event,” he said. “You’ve got fish coming both ways, it’s where they travel. There are constantly fish cycling in and out.

“It’s all about the juice or the nectar,” he added, noting that if fish aren’t sitting on the key structure, they have to be nearby. “There’s a lot more fish that hang around that aren’t on the juice, a lot of that gets overlooked. You can be real competitive fishing rest areas and get yourself in position to win.”

In the summer, Swindle says it’s common for bass to be more active as they’ll school up on key structure. He’ll alternate between a topwater and a jerkbait to get them fired up. Once the heat of summer takes over, he’ll look for bass to move to the outside channel swing where the bottom is hard and the water has been moving through.

As autumn rolls in, water temps begin to cool off, so he’ll crank through key areas. As the bite gets tougher, he’ll opt for a Zoom 4-inch swimbait rigged on a 1/2-ounce jig head, slowly working the bait along the bottom.

“When it gets super cold, they go to the deepest channel swing and that’s where the bait goes,” Swindle said.

Once the nice weather of spring arrives, bass come out of their winter funk and they’ll become more active. That’s when Swindle fishes a Carolina-rigged Zoom lizard quickly. Once the water warms and bass return to those channels, he’ll crank them with a Rapala DT 14 or 16 and a Texas-rigged Zoom Ol’ Monster worm. 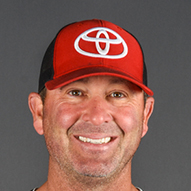