BACK
Rose, Dudley Say No 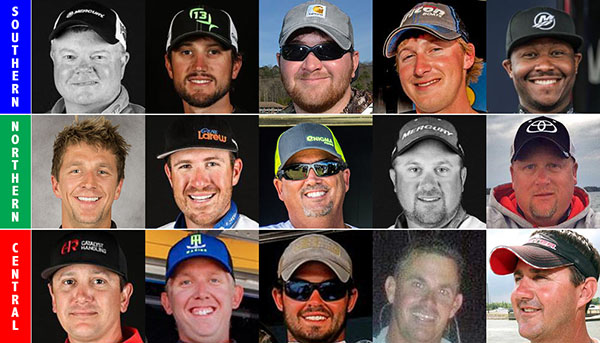 The crop of 2017 Elite Series qualifiers is shown above based on their finish in each respective Bassmaster Open division. Mark Rose (top left) and David Dudley (middle row, second from right) are displayed in black and white since they have opted to decline their invitations.

With the final Bassmaster Central Open going in the books last weekend, the group of anglers who earned an invitation to the 2017 Elite Series has finally come into focus.

It’s an interesting mix of veteran pros and would-be newcomers to the sport's top tier. The group of invitees from the Southern and Northern divisions have been known for some time now, but with the Centrals now complete, BassFans can get a better feel for who the newcomers to the Elite Series next year will be.

There will be some FLW Tour competitors making the move, which has become an annual occurence, and there will also be some true rookies and young anglers anxious to see how they measure up against some of the best in the world.

Here’s a breakdown of who’s qualified through each division and what each angler’s plans are. For those on the fence, time is running out. The first entry fee deposit for the 2017 Elite Series season is due Nov. 8.

The Southern Division wrapped up months ago, giving those who finished near the top of the points standings plenty of lead time to line up financial support, but not everybody who earned an invitation is planning to use it.

Mark Rose won the Southern Division AOY title with three top-15 finishes, but he announced last month via Facebook that he will decline the invite. Rose has been a stalwart in the FLW ranks for years and has been part of the flagship sponsor Walmart team for the past several seasons. Had he moved to the Elite Series, it would’ve created a gaping hole in the FLW Tour field and added another top-end talent to B.A.S.S.’s top circuit.

Stetson Blaylock, another FLW Tour standout, was second in points behind Rose. He is one of the sport’s top anglers under the age of 30 – he turned 29 in August – and this opportunity is certainly appealing. He has a solid stable of sponsors and he’s been trying to augment his current portfolio as prepares to make the transition to the Elite Series. 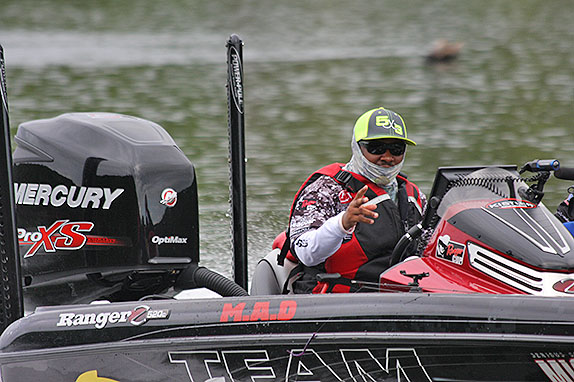 
Mark Daniels, Jr. is poised to make the move to the Elite Series in 2017.

Jesse Wiggins, the winner of the Smith Lake Southern Open, is now a two-time Elite Series qualifier. He declined the first time, but doesn’t want to wonder ‘what if’ any longer. The 24-year-old works as a respiratory specialist in central Alabama and is still looking for a title sponsor, but he’s committed to the Elite Series next season.

Dustin Connell is another young Alabama native with an Open win to his credit (2015 Alabama River Southern Open) and the former college angler is poised to make the jump to the Elites in 2017. He's already locked up a title sponsor for his rookie campaign.

Jacob Wheeler, the 2012 Forrest Wood Cup champion and winner of the 2014 Lake Chickamauga BASSFest, was the 5th-place finisher in the Southern points, but his 2nd-place finish in the Northern Open points takes precedence, meaning the final Elite Series invite for the Southerns landed on the doorstep of fellow FLW Tour pro Mark Daniels Jr.

Daniels is a former TBF National Champion who left a career in agricultural biology in California a few years ago and moved to Alabama in order to pursue a career in bass fishing. A two-time Forrest Wood Cup qualifier, Daniels confirmed to BassFan this week he will make the move from the FLW Tour to the Elite Series in 2017.

Chad Pipkens didn’t have the year he was hoping for on the Elite Series this season and that put his status for 2017 in question. Thanks to his winning the Northern Division AOY, he’s guaranteed to be back for his fifth year of competition.

Wheeler capped off a stellar year in the Opens with a runner-up finish at Oneida Lake and 22nd-place showings at both the James River and Lake Champlain. He has not been shy about his desire to measure himself against the Elite Series field and he’ll get that chance next year.

Third-place finisher Adrian Avena was already pre-qualified for the Elite Series since he finished among the top 70 in Elite Series points this year. Because of that, the 6th-place points finisher received an invite.

Jesse Tacoronte was a surprise 4th-place finisher in points. The native of Las Vegas and resident of central Florida is good friends with three-time Elite Series AOY Aaron Martens and co-owner of Enigma Fishing, the rod company that now sponsors Martens. Next year, Tacoronte plans to go head to head with Martens and Co.

Three-time FLW Tour AOY and former Cup champion David Dudley landed himself an Elite Series invite, but he will also decline it. Like Rose, he’s a member of the Walmart team and has said publicly his only reason for fishing the Opens is his pursuit of a victory, which comes with an automatic berth to the following year’s Bassmaster Classic. At some point, though, BassFans would probably like to see Dudley mix it up with the Elite Series field. 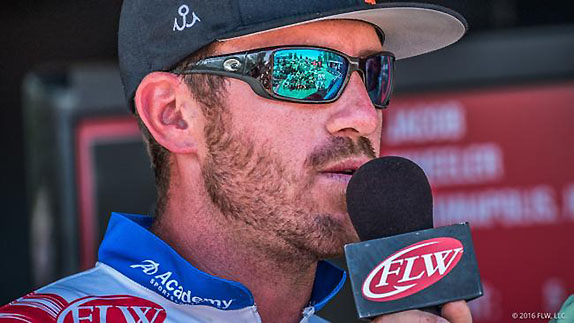 
Jacob Wheeler has had a successful start to his career on the FLW Tour. He'll make the move to the Elite Series next year.

Jamie Hartman was the final angler from the Northerns to earn an Elite Series invite. He hails from Newport, N.Y., a small town nestled between Utica and the Adirondack Mountains. He’s won the BFL Northeast Division AOY four times and competed in this year’s BFL All-American. Currently, he has a GoFundMe page set up in hopes of gathering financial support to make the Elite Series a reality.

The Central Open schedule was supposed to wrap up with the Red River event last month, but due to flooded conditions earlier in the year, the Atchafalaya Basin tournament had to be moved back on the calendar, so it served as the finale this past weekend. When the dust settled, Gonzales, La., resident Gerald Spohrer captured the AOY title, edging Red River winner Alton Jones Jr. by three points.

Spohrer was an FLW Tour rookie in 2016 – he finished 71st – and informed BassFan he will “without question” be fishing the Elite Series next year. It was Spohrer’s social media savvy back in August that was instrumental in helping coordinate rescue efforts around Gonzales after the area received more than two feet of rain in a three-day span.

The Jones name is familiar to BassFans because of the successful career compiled by Alton Sr., the 2009 Classic champion. Alton Jr. narrowly missed qualifying through the Northerns, but finally punched his ticket via the Centrals with a 35th-place finish last week. His win at the Red earned him a ticket to the Classic in late March, but he’ll be busy well before that with the Elite Series season kicking off in February – he’s taking the invite.

Skylar Hamilton won the first Central Open of the year at the Arkansas River and the Tennessee resident managed to collect another top-12 at the Red River and a top-50 at the Atchafalaya Basin to wind up 3rd in points. He says he’s committed to the Elite Series and at 21, he’ll be among the youngest competitors on the circuit.

Prior to 2016, Tyler Carriere’s best finish in a Bassmaster Open was 44th at the Lake Seminole Southern Open last year. This season, he posted three top-30s in the Centrals to lock up his Elite Series invite. Carriere hails from Youngsville, La., located just south of Lafayette. He operates a bowfishing charter service in Port Sulphur, La.

Rounding out the top 5 in the Centrals was Robbie Latuso, another Gonzales, La., resident. Latuso hadn’t competed in an Open since 2013, but this year he compiled three top-31 results to secure an Elite Series berth that he says he will accept.