Schoolers, Backwaters Were The Ways To Go 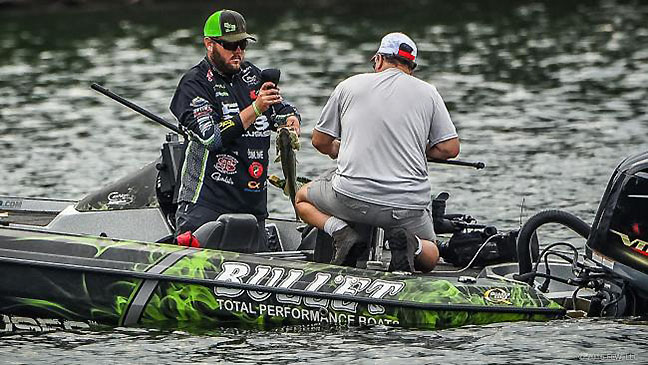 The 2016 Forrest Wood Cup was yet another near-win for Michael Neal on the Tennessee River.

Following are some pattern details for the 2nd- through 5th-place finishers at last week's Forrest Wood Cup.

Michael Neal hails from Dayton, Tenn. on Lake Chickamauga and is always a threat to win on the Tennessee River chain. Wheeler Lake proved no less vulnerable to his talents, though it wasn’t the deep-ledge bite that Neal excels at that carried him to his runner-up finish.

“I thought it would be won offshore coming in, but it didn’t seem like anybody caught them out of deep schools this time,” he said. “Even though I wasn’t out on the drops, I stayed on the lower end where I’m more comfortable. I knew the back of the creeks thing (that winner Cox rode to a wire-to-wire victory) was going on, but that’s just not my strong suit.”

He had seen schooling fish break the surface closer to shore while scouting for a deeper school in pre-practice. They were still there when the tournament started.

“I fished main-lake points and bars mostly,” he noted. “I was poled down in maybe three feet of water, and I could maybe hit the bank on a really long cast. I was sitting in one place waiting for them to bust the surface. When they did, I’d cast to them, up in less than 2 feet.

"When I’d see the V-wake of a shad running from a bass, I’d try to guess where it was going and cast between it and the bass. If I guessed right, usually the bass would hit my bait. There was a lot of luck involved.”

He stayed on one main-lake flat for most of the tournament, standing and waiting for the fish to come up, sometimes for minutes that seemed like hours. Once he cast, he found he had to work his walking topwater lure at a very slow cadence to get bit.

“I put a feathered Gamakatsu treble on the back of each of the three different baits I used, and that was a real key to getting them to bite,” he added.

Early each morning he often started with a Carolina-rigged finesse worm to get a quick limit in the boat and potentially fire up the schooling activity. When he hooked a fish in that shallow water it would run through bait and bass alike in its struggles to free itself.

“That would scatter the bait and get the others to start eating,” he said. “After they got going the bigger ones would hit the topwater.”

> Main factor in his success – "Experimenting with the retrieve to find that they wanted it walked very slowly, and adding the feathered Gamakatsu treble to the tails got more bites, too."

> Performance edge – "My Power-Poles let me avoid trolling-motor noise that would spook the schools, and they would hold me still so I could watch for bait and breaking fish better. I also used my Hydrowave unit to stir up the bait and get the bass active. Whenever the action would slow down, I could change sounds or levels on it to get them going again." 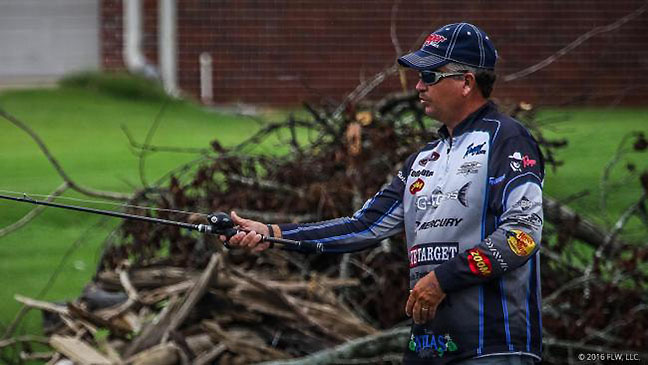 
Todd Auten had a great day 3, but a much more difficult final day.

After a stellar day-best bag on Saturday that pulled him within a mere 9 ounces of the leader, Todd Auten suffered a disappointing three-fish day in the final round, dropping him to 3rd. Like Cox, he likes to seek out secluded backwaters wherever he can, trying to find unmolested fish in shallow water. He found that, and more.

He was one of the few anglers who found reliable, quality fish upstream from the Ditto Landing launch site. They were big, strong river-current smallmouths, schooling in an eddy along the shoreline about midway between Ditto and the Guntersville Dam. Unfortunately they were the opposite direction from the creeks he found that were also producing good bites (of the largemouth variety), a long run away from the lower lake.

He had to choose which way to run every morning.

"I usually like to hit my closest spots first and work my way to the farthest ones, and I wish I'd done that (on the morning of day 4),” he said.

He had caught a crucial 5-pounder on a jig in the creeks each of the 2 previous days, and with that in his mind he returned to the creeks.

Late on 3ay 4, when he couldn't come close to his day-3 bag, he returned to the eddy and caught two nice smallmouths, but ran out of time and couldn't finish his limit.

“All my history (on Wheeler) has been down the lake,” he said. “I spent 1 day upriver in practice and the rest downriver. I didn’t get as much time on the water the first 2 days of practice as I’d have liked due to a back problem. I went to a chiropractor each morning before I got on the water.”

Those medical time-outs limited the number of small out-of-the-way creeks he could explore.

Over the 4 tournament days he did his damage in four different creeks, all sporting cooler water and targets like logs and grass in shallow water.

“I’d cast past the target and reel slowly up to it, sometimes scattering the bait holding close to the cover,” he noted. “Then I’d turn around and fish it all again with a different lure. The frog probably got me the most weigh-in fish, but I got some on a buzzbait, a ChatterBait, and a jig. They’d sometimes hit the jig on the bottom and sometimes when I was swimming it.”

The smallmouths he found were schooling on a main-channel point with current hitting it to form an eddy.

“I’d throw a Super Fluke upstream of the eddy and let the current bring it to them,” he said. “I caught good smallmouths there at the start of the first day and the end of the last day.”

> Main factor in his success – “I keyed on shorter creeks that got less attention than the four or five we all knew we could all get way back in, and I knew they’d get beat up. The main thing was fishing real thorough and going through over and over and showing them different baits.”

> Performance edge – “I’d have to say it was the Garmin (electronics). I used the satellite photo overlay on top of the lake map, and it showed places where the water looked a little deeper in the back of some creeks. I found less obvious places in shorter creeks that most guys weren’t looking at.” 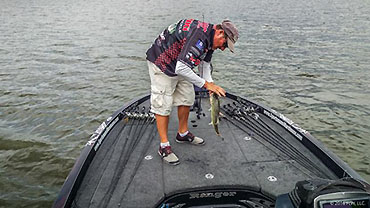 
Bryan Thrift finished much higher than he expected to after a lackluster practice.

Bryan Thrift is known for his run-and-gun style of fishing and he didn’t surprise anyone at Wheeler Lake – not with his coverage of the water nor his high finish at this year’s Cup. Still, he had a bittersweet taste in his mouth to mull over on his drive back to North Carolina.

“I didn’t have a good practice,” he said. “I had to kind of wing it during the tournament. My expectation was that if I could get 8 to 10 pounds a day I’d be happy. I really wasn’t on the fish to do any better, and I didn’t think I could win with what I found.”

He targeted schooling fish on the main lake and in the larger creeks.

“I would make maybe 15 to 20 casts to a spot, then I’d move to another,” he noted. “Other guys were fishing the same stuff so I had to keep bouncing around. I would work the schooling fish in the backs of the big creeks, then swim a jig on the way out.

“Usually in the summertime in the back in these creeks, if you fish through an area in practice and get a bite, then come back later in the tournament and fish it slower there are more there that will bite. They stay in the same general area all summer.”

His number of daily keeper bites ranged from five to nine. A Damiki D-Pop topwater brought in the better fish on days 1 and 2, but he caught heavier specimens swimming a Damiki Mamba Jig on days 3 and 4.

“My bite started to die off by 10 a.m. every day and I struggled to get bit in the afternoons,” he added. “I wish I could have figured out something to do that would have worked later in the day.”

Despite his disappointing practice and limited bites during competition, he hovered between 3rd and 6th in the standings throughout the tournament, settling at 4th ver the last 2 days.

> Main factor in his success – "The key was just staying calm and slow and keeping after them, hitting a lot of places and cycling through areas, just believing sooner or later they'd bite somewhere."

> Performance edge – "The Evinrude E-TEC G2 for moving around so much. Also, the Fitzgerald Topwater has great action to give the D-Pop just the right movement." 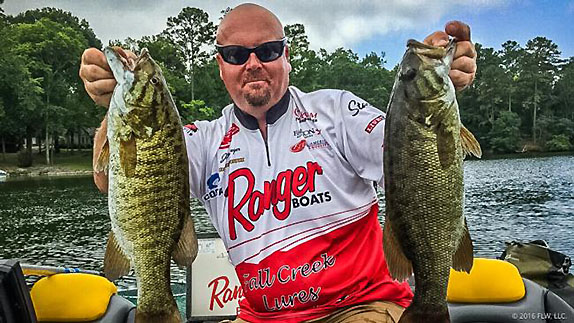 
BLF All-American champion Jeremy Lawyer caught schooling fish both on the surface and well below.

Jeremy Lawyer, the 2016 BFL All American winner, capitalized on schooling fish from top to bottom, picking off both active and inactive bass holding on or near main-lake points on the lower end within sight of the Wheeler dam. He achieved a steady climb up the leaderboard each day, progressing from 27th to 16th to 10th to 5th. He came screaming across the finish with his top haul of the derby, a day-best 16-06 bag, landing in the Top 5 despite being one fish short of a tournament limit.

He fished predominantly one point and pocket across from First Creek. He shared the spot with Jimmy Reese until the last day, when Reese was the first man out of the Top 10 cut. That gave him the freedom to move to other spots when the action slowed, and return later after letting the fish rest.

He was throwing to fish that were pushing shad over the point, casting a Yellow Magic Popper topwater to the ones that came to the surface. In between, when the bass sounded, he worked a slab spoon to try to fill his limit and maybe upgrade a bit. On the last day, the spoon ended up producing four of his five weigh-in fish, contributing to a bag with three smallmouths that weighed about 4 pounds each.

The topwater bite for schooling fish seemed to be best when conditions were slick, sunny, and calm.

“You had to land that bait right on the fish when they’d bust the surface, within a second or two, or they’d be gone,” he said. “I had to make really accurate casts.”

His best area featured a pocket with a long, shallow bar stretching out from the point. When the fish weren’t breaking, he threw a variety of other baits, one of which (a LiveTarget crankbait) enticed a monster 6-pounder that helped make up for a day that saw him return to the ramp one fish shy of his daily limit.

“I used the spoon to try to catch the better fish underneath the schooling fish, because a lot of times there will be bigger ones waiting down underneath,” he added. “I used it kind of as a numbers bait to produce limits, but it accounted for the big bag on the last day.

“I lost a lot of spoons this week. Maybe that’s why the water went up,” he said with a grin.

> Main factor in his success – "Probably deciding to camp on the second day and not run around. I knew the fish were going to come up and if your timing was off, you were out of luck."

> Performance edge – "Making a 57-mile one-way run each day, you can't beat the ride of a Ranger, and the livewells were critical for keeping fish alive in that hot water."