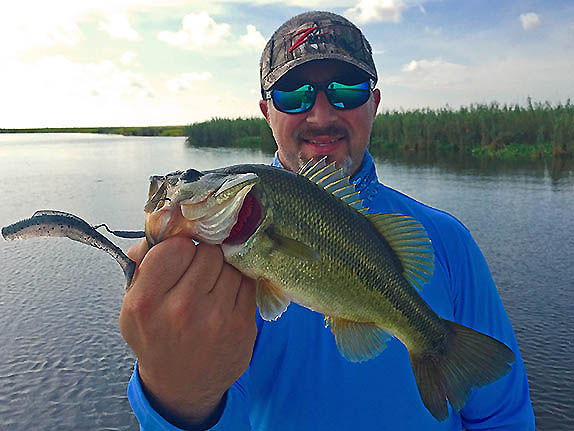 In addition to heading up Z-Man, Jonathan Zucker oversees companies in several other industries.

Fishing is a sport of universal appeal, and so often we find corporate leaders and captains of industry enjoying the all-too-rare moments of rod-bending revelry. Most spend the majority of their work week managing budgets, personnel and production issues while fighting off daydreams of their next trip to the lake.

But not Jonathan Zucker – he’s found a way to keep one foot in the board room and one on the front deck. And combining the two worlds, he's developed a message he feels can benefit all those with the creativity and initiative to improve their pursuits of finned opponents.

As president of the Charleston, S.C.-based and family-owned InterTech Group, Zucker oversees companies in aerospace, specialty chemicals, industrial products, consumer products, entertainment/leisure, real estate, and financial services. He holds computer science and business degrees from Georgia Tech and prior to returning to the family business, he worked in software consulting.

An avid angler, Zucker’s also president of Z-Man Fishing Products, a company that has made a significant impact in its relatively short history. As Zucker points out, Z-Man’s roots trace back more than three decades, while the consumer brand was launched a little under 10 years ago.

The back story of Z-Man’s ElazTech material is one of pure light-bulb inspiration.

“Z-Man was started on some excess capacity from silicone tapes used to line automotive exhaust systems,” Zucker said. “We had a former bass pro who was a mill operator on the tape machine and he realized he could make silicone skirts out of the material.

“When we first started out, for many years we were an O.E.M. supplier for other companies. We continue to do that today, although today we’re much more focused on our consumer brand.”

A Matter of Chatter

Zucker’s father, Jerry, was a triple major – physics, chemistry and mathematics – with a master's degree in electrical engineering. With over 350 inventions and patents to his name, the elder Zucker derived much of his success from innovation and, in doing so, established a company with a firm grasp on the concept and implications of intellectual property (IP).

This experience has provided the clarity needed to traverse the fishing tackle industry’s often tumultuous terrain, particularly in the case of Z-Man’s marquis lure – the Original Chatterbait.

Greenwood, S.C., anglers Ron Davis Sr. and Ron Davis Jr. invented the bait and fished it with great success, but once they graduated into a commercial venture, they realized the need for greater production capacity.

“After some tournament successes, they were having a tough time keeping up with demand and they reached out to us to help with manufacturing,” Zucker said. “We helped them meet that initial surge of demand and then ultimately came to a deal with them to acquire the intellectual property from them.

“That intellectual property being the invention, the patents themselves around the design of the Chatterbait, as well as the trade dress, meaning the hex-shaped blade that we call the Chatter Blade and the names, which were all registered trademarks.”

With the Chatterbait’s success came numerous attempts to build similar products. Some bladed jigs are unique enough to avoid patent infringement, but in other cases, Zucker said the issue simply must be addressed with infringing parties.

In his view, it’s not only Z-Man’s right to protect its IP, it’s a responsibility.

“The whole idea of intellectual property is to incentivize innovation with some idea that you will, for at least some short period of time, have more or less a monopoly on the innovative idea so you can recoup monies invested in that R&D or in the acquisition of ideas and to be commercially viable and, hopefully, profitable from the ideas,” Zucker said. “That’s the whole basis for the patent system and for the trademarks, as well.

“People trade on their name. A name has a certain amount of goodwill that goes along with it. Therefore it’s important to protect names so that people can associate a name with a product or a brand.”

A Point of Principle

Noting that intellectual property is a complex topic, Zucker said it’s been Z-Man’s intent to protect its patents and trademarks in a manner that’s heavy on the inspirational and light on the muscle-flexing.

“From the outset, after learning a lot about how things historically have worked in the fishing industry, our goal has been to take an opportunity to do the right thing and set an example,” Zucker said. “We took this approach so others could look to us as people who are trying to do the right thing from a point of authority in that we have a considerable background in managing patent portfolios and intellectual property portfolios.

“Bringing that expertise to the fishing industry has been challenging, to say the least. I think many people wrongly (consider us) bullies because we are asserting our rights to our patents and trademarks, but the fact is that the patents and trademarks are of no value unless we assert them.”

Doing so may take multiple forms, from a simple “FYI” conversation to legal enforcement. Zucker said he greatly prefers the former.

“The majority of any IP disputes or misunderstandings have been resolved through discussions – business person to business person – without the need for any further action,” he said. “We have gone the legal route only when we’ve had to; it’s a painful process – and an expensive process – and it’s not one that we like.

“We don’t do it for litigious reasons, we don’t do it to try and make money – we do it because we think it’s a requirement in order to protect the intellectual property.

“First and foremost, we’re all fishermen and we’d like to get along with people and we think that we can work out (potential patent infringements) on a conversational basis, but obviously, we feel that we have an obligation to defend our IP when we have to. That being said, sometimes we’ve had to push a little bit harder.”

Well before such measures become necessary, Zucker has found that straightforward explanations of specific IP details are typically well received. Balancing the benefit of the doubt with clearly documented facts makes a convincing case.

The goal of Z-Man’s position, Zucker said, is never to squash ambition or limit anyone’s opportunity. In fact, he sees Z-Man’s staunch support for the system through which its IP is protected as a beacon for others navigating these often tempestuous waters.

“I’ve had other people in the industry call me and say ‘Hey, how does (IP defense) work out for you?’ ‘What’s the process?’ ‘How do you recommend going forward to protect our unique idea?’” Zucker said. “I definitely appreciate it when people approach us about this subject.

“We want everyone to succeed in their businesses. While I think that nobody’s perfect in this regard, I think it’s important that people show some creativity in order to set themselves apart.”

As Zucker explains, this interest in assisting others through example and practical advice follows the Hebrew principle of Tikkum Olam, which means “to repair the world.”

“That’s a mantra that my family lives by and it’s something we apply to all of our businesses and to giving back to our communities, our region and globally,” Zucker said. “So, certainly, that mantra pervades everything that Z-Man does, as it does in each of our businesses.”

Applying this mindset to the fishing industry comes easy, Zucker said, given the wholesome nature of this family-oriented activity. Z-Man supports various kids fishing programs, sponsors high school and college fishing teams and contributes to programs aimed at integrating veterans into the workforce – and taking them fishing.

Zucker concludes: “Each time we engage in business and profit from business, we want to give back in some way to try and make the world a better place.”