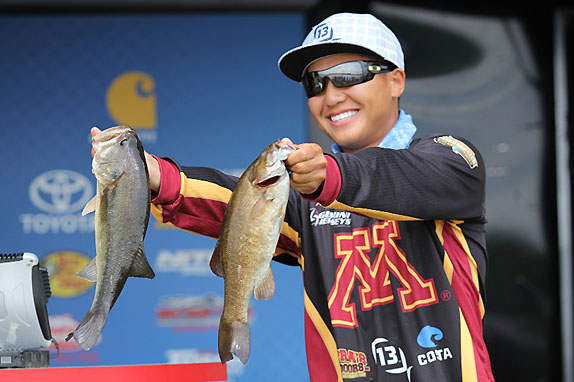 Trevor Lo of the University of Minnesota will become the fifth angler from the collegiate ranks to compete in the Bassmaster Classic.

By Casey O'Donnell
Special to BassFan

Trevor Lo of the University of Minnesota defeated Texas A&M’s Josh Bensema in the final round of the College Bassmaster Classic Bracket to become the fifth college angler invited to the Bassmaster Classic. A stacked field of collegiate competitors could not withstand the "numbers game" that Lo played for the three rounds on Stevens Point Flowage.

The 21-year-old Lo will be representing fishing’s best young talent next March at Oklahoma's Grand Lake. Here's how he earned his Classic berth.

Anglers were restricted to a stingy Lake Dubay on the Wisconsin River during the National Championship. Three-fish limits are the standard for Dubay, and those were proven not easy when 81 teams produced only 27 limits the first 2 days and zero limits were caught on the final day by the five teams the remained.

“Our first day we only had four keeper bites and we might have caught six or seven (fish),” said Lo.

Lo and Burgan were on a reaction bite with jerkbaits and square-bill crankbaits around the north dam area. It was an area that the team stayed out of in practice due to an uncertainty regarding boundaries.

“The night before the tournament we asked the tournament director, Hank Weldon, if we were allowed to fish past the buoys and he said we could,” said Lo. “After we started outside of the dam with the water pumping through we ventured up there (to the other side of the buoys).

“I caught a nice 3- pounder and got wired and a little loud, and some people heard us.”

After the day-1 weigh-in, a newly sparked interest in rules pertaining to fishing around the buoys forced B.A.S.S. officials to send a mass text message to the participants stipulating the off-limits boundaries at the north dam area.

A later boat draw on day 2 ended up putting the Minnesota duo at the back of the line when they arrived at the north dam – a newly fished spot for most teams because of the additional clarification of the rules. Lo and Burgan adjusted to the fishing pressure with a finesse approach of shaky-heads and dropshots, making the final-day Top 5.

“It was a real grind – we had to make sure every fish we hooked got in the boat,” said Lo. “Everybody said it was unbelievably tough. The second day we had over 40 teams that zeroed.”

On day 3 Minnesota stuck with the slow presentation on the finicky bass, scraping out two fish that ended up putting them in 2nd place and qualifying them for the latter rounds.

The competition moved from Lake Dubay down the Wisconsin River one pool to the Stevens Point Flowage for the Classic Bracket. Since Lo and Burgan focused all of their attention on catching fish in Dubay in order to do well in the National Championship, they opted not to practice in Stevens Point Flowage in the pre-tournament period. Lo prepared for the bracket with images from Google Earth mapping the night before to get an understanding for what he was up against.

“I looked for what stuck out to me and what on the river would hold fish,” he said. “I planned on starting out targeting outside bends on the main channel and it held true.”

Lo started power fishing with a jerkbait and square-bill early. After he realized he was around fish, he knew he could maximize what he found by more thoroughly fishing a wacky-rigged soft-plastic stickbait.

“I covered water quickly to see if there were fish there,” said Lo. “And once they started biting I would slow down with the finesse and pick apart the laydowns.”

His bites came from a mix of current breaks and laydowns on the deeper parts of the outside river bends. He ended up finishing out a limit and culling twice, and his bag included a 3-02 smallmouth.

The conditions shaped up for the best fishing day of the week for Lo after he used day 1 to hunt for the winning fish.

“The first day was kind of a practice. Fortunately I had enough weight to make the second day so I don’t want to take away from the seriousness of the first day by saying it was practice, but that was my first time on the water,” said Lo. “By the second day I knew what my game plan was and I did the best that I could do.”

His pattern proved strong and he put on a clinic for the spectators by boating nearly 20 fish on his way to the final round.

With storms passing through overnight and into the morning, changes in conditions halted Lo’s bite for the first 4 hours of the day.

“The rain from the night before made the flow of the current stronger. It was really cloudy so the fish were not holding tight to the cover, and the wind was making it difficult to stay on the laydowns,” said Lo.

Around 11 o’clock the sun came out and the wind died down, which helped him to pinpoint his fish. He persisted with the wacky-rigged soft-plastic to catch a limit and ultimately earn the biggest win of his career.

“Everything I do, I try to do for the glory of God," he said. "I’m just a kid from Minnesota and its humbling to see how far I have come.”

> Main factor in his success – “The support I had from my family and my friends. That motivation to do as best as I could, they were so encouraging, (telling me) you’ve made it this far, win or lose we are still proud of you. Just having that support is what helped this past week.”

> Performance edge – “Winning the mental game first because a lot of fishing is staying focused and not letting those things get in your head. If you lose that mental battle, you will lose without a doubt. We both lost fish, Chris and I at the National Championship, I lost a really big fish the last day of the bracket tournament. Not letting it get to me and doing what I know how to do was key to continuing to catch them.”