BACK
On The Defensive 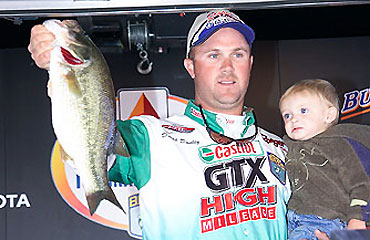 David Dudley said a flaw in the BASS rules have created a need for defense.

David Dudley earned the nickname "million dollar man" by winning the two richest bass tournaments in history. He's regarded as one of the best sight-fishermen on the tours, but he's equally known for his outspoken nature and willingness to push the limits of competition.

At the Ranger M1 tournament, for example, he used a chainsaw to cut his way into a backwater where he caught the winning stringer. At the recent Harris Chain Bassmaster, he again worked within the rules to employ a new strategy.

He said it was "defensive," but others said it was "offensive," and his strategy has sparked a heated debate that, at the very least, should lead to a rules change for the 2006 season.

Dudley is a longtime FLW angler, but returned to the Bassmaster Tour this year after a 2-year hiatus. The FLW Tour announces its boat draws at the pre-tournament meeting, which means anglers don't know their boat draw during practice.

The Bassmaster Tour, however, uses a grid system. The grid system eliminates much of the random elements of boat draws – an angler is guaranteed an equal number of early and late flights. If an angler is in flight 12 for one tournament, for example, he knows he'll be in flight 2 for the next one.

BASS adopted the grid system to promote fairness. The problem is, an angler knows his boat draw before the tournament begins.

Therefore, Dudley knew he would be one of the last boats out at the Harris Chain. Rather than surrender the easy sight-fish in the Harris Chain canals to the first flight, he went out on the last day of practice and set the hook on a number of big fish, then released them. That would make the fish very diffcult to catch the following morning.

It's difficult to determine whether this has ever occurred in the past – although many believe it has. What's different about the Dudley affair, however, is that he freely admitted to doing it. That raised the ire of many in the field – especially those in the early flights who had planned to start on those fish.

"Never in the sport of fishing have you had to incorporate defense," Dudley said. "Fishing is an offensive sport, but the way (BASS has) the grid set up, they've created a defensive sport.

"With that system, you know exactly where you'll be, and exactly what's going on. I was one of last boats to go out – I already knew that. There were a few canals packed with sight-fish, and if you know anything about sight-fishing, you know that the top few boats to get out are going to be the ones with big bags."

He said that's why he set the hook on those fish. "Knowing I couldn't catch them – that I couldn't get to them – I played defense. I swung on some of those sight-fish. Is it against the rules? Nope."

He said if BASS, or other anglers, want to prevent the practice in the future, the grid system has to change. "Would I have done that if there was no flaw in the BASS system? No, I wouldn't have. They need to keep the grid a mystery. If it was a mystery, I never would have done it in a million years."

Two anglers who were particularly vocal in their condemnation of Dudley were Roland Martin and Peter Thliveros.

"Roland (Martin) knows all about what strategy is. A lot of the first rules of bass fishing were written for him. I'm playing the game, and the way it's set up, it creates defense.

"You know why they were so upset? Because Roland was boat 3, and Peter T. was boat 4 or 5. Those babies are sitting there crying."

There is no rule that prohibits catching fish in practice. However, rule 5 states: "Competitors in BASS tournaments are expected to follow high standards of sportsmanship, courtesy, safety and conservation. Any infraction of these fundamental sporting principles may be deemed cause for disqualification."

Dudley does not feel his strategy is a breach of ethics or sportsmanship. "It's not unethical, it's strategy," he said. "Everywhere I pulled up – in the locks, the parking lot – everyone's saying, David, you did nothing wrong. I've gotten a million phone calls where people are saying the same thing.

"And if the roles were reversed and I was one of the first boats out and somebody did it to me, would I get mad? No. I'd say, heck, that guy's pretty smart.

"(BASS tournament director) Trip Weldon said at the tournament meeting that said he can't stop anyone from going down the bank and catching fish. He also said the grid system won't be here next year.

"I like the grid system, because you get equal fishing time throughout the year. They just need to keep it a mystery."

He also said his strategy isn't a new one. "Everybody's been doing it for years," he said. "Since I came out in the open and said I'm playing defense, a ton of people have come up and said. 'I've been doing that – I just didn't have guts enough to say it.

"As soon as I openly said I was doing it – as soon as I took the rap – that took the pressure off people. They were like, 'Whew – David, I've already been setting the hook on these sight-fish."

Dudley chose not to name those who expressed their support for his strategy, but of those pros that BassFan was able to reach, David Walker and Jim Bitter seemed to be the least concerned about the practice.

"Basically, he caught fish during practice," Walker said. "I've seen lots of guys do it, and I didn't understand why, but at least (Dudley) had a reason. In terms of it being a big controversy? To me, I don't think it is. I don't see the big deal in it.

Bitter was the runner-up at Harris. "I noticed a lot of them really condemned him, but I think there are a lot of hypocrites out there who might do it but not admit it," he said. "There was a worse travesty than that going on with me but they're not talking about that." (Bitter claimed anglers crowded him while he was leading and one angler in the Top 12 fished his area on day 3.)

Thliveros, who won the tournament, had this to say. "I just think it shows what kind of person (Dudley) is – obviously, not a sportsman. All's fair when it comes to love, war, and fishing I guess. What comes around goes around, and I hope he gets stung one day the same way. Someday someone will meet him in a parking lot and teach him a lesson.

"It's just not an ethical thing to do. Call it "combat fishing," or chess or poker or trying to be three moves ahead of the others, but I call it unsportsmanlike. I think he should have been DQ'd on the sportsmanship rule. We're trying to elevate the sport – not play bush leagues."

Larry Nixon, who finished 5th at the Harris Chain, told BassFan, " It's a bunch of crap – the whole controversy. I don't understand anybody having a problem with a man wanting to catch a fish. There's no rule against it. I saw a few that looked like 10-pounders that I wanted to catch, but you feel kind of stupid when you pick up a rod and everybody looks at you funny.

"Heck, sometimes you need to know if they'll bite or not. I don't have any problem with it."

Todd Faircloth led day 3 at the Harris Chain, but finished 3rd. " I don't really have a comment about it, but I talked to (Dudley) about it a little bit, and I can't really blame him," he said. "He knew he was in the 12th flight and wouldn't have a shot at those fish. That's what's wrong with the system: it's on a grid, so you know what flight you're in at the next tournament.

"To be fair, and to keep stuff like that from happening, they should have a "mystery grid" – have it where you'll fish all the flights through the year – but you don't know when you'll fish each one."

> BASS tournament director Trip Weldon was unavailable for comment or clarification. BassFan will post his comments as soon as he can be reached – specifically, whether the grid system will change this year or next, and whether BASS will disclose boat order during the Bassmaster Classic practice.

> BASS reaffirmed its position that Dudley broke no tournament rules, and there was no grounds for a DQ.