BACK
Lots Of Fish Go Shallow

Cold Water Can Offer Up A Red-Hot Bite 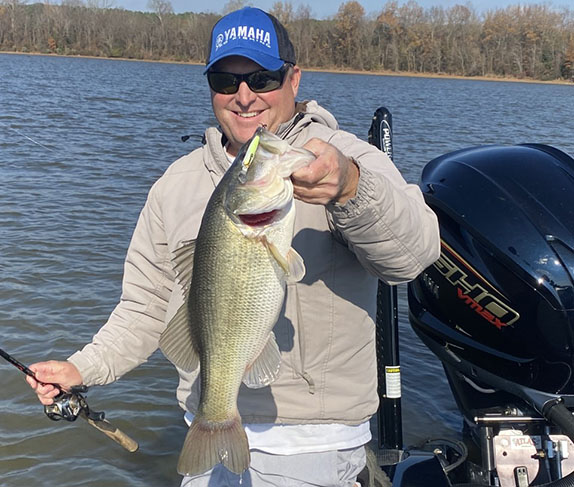 The Hardcore SH-60, which is sort of a crankbait/jerkbait hybrid, is a big producer for Dustin Wilks during the winter months.

Winter is undoubtedly my favorite time of the year to fish. If you live in the certain parts of the country, it’s game-on throughout the year's colder months.

The reason I love winter fishing so much is that the bass are highly catchable. I think this is because they're cold-blooded and their brains simply can’t react fast enough for them to turn away from a lure like they can do when it's warmer.

Many of you remember Chris Elliot, who fished B.A.S.S. and FLW, winning a tournament at Lake Murray. We grew up together and one of the best winter days I can recall was on Christmas morning at Falls Lake in North Carolina. The fog was so dense that we had to go slow, but we made it to a likely area – a deep, stable cove that held fish during that fall – so that was where we started.

When we cut the motor off we could hear and see shad flipping on the surface, and then one got busted. We quickly tied on topwaters and it was action on every cast for hours. Talk about a Christmas present! There were so many fish that you could walk the bait around the boat and catch them. It was the craziest thing I’d ever seen, and we were the only ones on the lake. The water temperature was 52 degrees.

Most casual anglers are surprised to hear that winter is my favorite season, but the diehards know it well. But even the most hardcore anglers don’t get to go fishing as often as other times of the year with all of the Christmas holiday preparations and needed family time.

To understand the winter, we must take into consideration a lot of factors – especially where you're located and what the fish did in the fall. In much of the South, the winter is just a continuation of the fall bite, following the baitfish and staying with the fish. In many cases, large schools of bass congregate in deep water and under bait, but at the same time – and this really confuses a lot of people – there are a lot of fish dirt-shallow.

What in the world are those fish doing up there? Sunning, eating, chasing small bluegill and crawfish, or cornering shad against the bank? The answer is always – it depends. Fish go shallow for many reasons. I once saw bass cruising a flat about a foot deep under the ice. I’ve also heard lots of duck hunters say they see huge bass way up on flats in the back of creeks with their spotlights in icy-cold water on the way to their blinds.

When cold-water bass get up in the shallows, they tend to like a bit more finesse in the way of crankbaits. They often go for one of my favorites that has a big following in the Carolinas — the Hardcore SH-60. This is an old bait, coming and going over the years. I had some 20 years ago and keep a dozen or so in different colors in my boat. I best describe it as a cross between a crankbait and a jerkbait. It's subtle with a tight wiggle and it's small, but casts well.

I normally fish it very slow and somewhat steady until I lose bottom contact, then I pause it and pull it, not was hard a jerkbait, but kind of softly. Fish love it. I fish it both on spinning and casting gear, depending on wind and the depth I want it to reach. If I want it deeper, I use 8-pound fluorocarbon line (Yo-Zuri T-7) on a Falcon Lowrider spinning rod. If I want to stay shallow, say 3 feet on the banks, then I fish it on casting gear with 14-T-7. 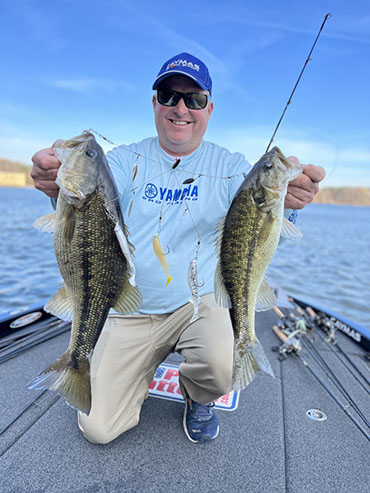 
Nothing beats an Alabama rig for suspended fish in the wintertime.

If the water is murky or slightly muddy, my favorite is to use an Eco-Pro Flipping Jig on shallow trees along sunny banks. This will get some of your biggest fish of the winter. I typically stick with a half-ounce bait, and in the winter, I still like a pork trailer. I still have some old jars of pork from long ago that I break out. Plastic works, too, and I’m sponsored by Culprit, but there is something about pork on a jig when the water is very cold and dirty. I usually use a black and blue jig with a matching trailer or a brown trailer. Simplicity gets it done. The tungsten is the only thing fancy here – it lets you pick up on light biters way better. I don’t like deep trees, either – ones by themselves in water about 5 to 8 feet on the end are perfect.

My opinion on the whole shallow-water thing is that these are the resident fish, except in the case of the ones chasing shad on the bank – those fish likely push them up from deeper water or a deep cove into the back, where they are trapped. So to catch the shallow ones, it is just like always: You have to cover water, and sometimes a lot of it, to find good bass shallow in winter.

Traditional spots like channel-swing banks are often best, giving fish the choice to move up or down, but don’t overlook the flat, featureless banks as well. I’ve learned to always check a little bit of everything. Doing the same thing with no success makes no sense, so don’t be afraid to explore and try off-the-wall stuff.

The most consistent deep method is to find baitfish, but not too many. The water can’t be muddy, either, or all bets are off for deeper water.

If you have a hard time reading the bottom when there is tons of bait, then it is generally brutally tough there unless there is some fantastic cover or structure nearby that bass can rest on and or ambush from. Then you can target the resting ones and get them fired up. Jerkbaits, crankbaits, lipless baits and Alabama rigs are standbys.

In open water, suspended fish are often limited to a handful of baits like dropshots, jighead minnow baits, spoons or A-rigs, but If the shad are too thick all over, it is difficult to find them. The ideal situation is to find one area that has the bait, say in the middle of a creek on a channel bend with a road bed or rock pile or other structure close by, and fish the structure.

The A-rig is the most deadly of all winter lures for suspended fish. I’ve come to really enjoy fishing it. The best is when they hit is so hard that they throw slack in your line ... now that is fun! My Favorite bait is actually a saltwater offering called the Culprit Riptide Mullet. If you watch my show, you’ve seen several 30-pound bags on this bait in the winter.

Winter fishing is a holiday present to all us BassFans, so get out there and enjoy!