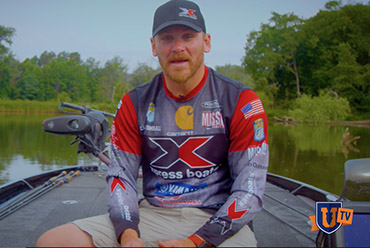 At this point in time, any educated bass angler throughout the country or even the globe has both swim jigs and bladed jigs in his or her boat.

“Both are absolute fish-catchers,” said Louisiana pro Caleb Sumrall. “They’re great search baits.” Both of them excel in overlapping situations, but he believes that you can substantially improve your catch rate if you make slight adjustments and use each of them judiciously.

His first consideration as to which to try is the time of year. In the pre-spawn, a period when hard-rattling lipless crankbaits have traditionally been a go-to, he prefers the bladed jig. “I know how much noise is a factor early in the year,” he explained. “This thing gets chewed all over the country.” Not only does it draw fish from a distance and aggravate those at short range, but it can also represent a variety of different types of forage.

During the spawn, he tends to get off of these two lures and switch to soft plastics, but after the bass complete the mating ritual he’ll bring both lures back to the top of his list of options. This is when little adjustments produce not only more fish, but also bigger fish. In the morning, under low-light conditions, he’ll go with the bladed jig, but if the day goes on and there’s little wind, he’ll switch to a swim jig. “This is a four-wheel-drive,” he said of the more subtle lure. He will use it in 2 inches of water down to 5 feet, even buzzing it on the surface at times, and adjusting his line size and type to the available cover. The level of surface disturbance (i.e., wind vs. calm) will continue to inform his choice. When the fish are highly-pressured, or otherwise fickle, he’ll lean toward the swim jig a little bit more.

He keeps his colors simple: green pumpkin or bluegill, and black and blue, with white/shad mixed in exclusively during the spawn. “You don’t need any other colors of the spectrum,” he explained.

He likewise keeps his trailer selection simple, employing either a swimming profile (like a ribbed swimbait) or a flapping profile (like a craw or twin-tailed grub), depending on how high in the water column he wants to work the lure. More flapping action produces a greater amount of rise.

Sumrall throws both lures on Kistler Rods. He fishes the Chatterbait on a 7’3” medium-heavy, but the swim jig, with its heavy weed guard, is likely to be fished in heavier cover, so it demands a heavy action. Both are paired with a Bruin Outdoors Paul Elias Legend Series baitcasting reel with a 7.3:1 gear ratio. He spools it with 17- or 20-pound fluorocarbon for the vibrating jig. He uses either 20-pound fluoro or 50-pound braid for the swim jig.

If you want to learn some of the other secrets of how Sumrall decides when, where and how to use a swim jig versus a bladed jig, including his situational hook-setting techniques for each of the two, check out his full on-the-water video, available only by subscribing to The Bass University TV.