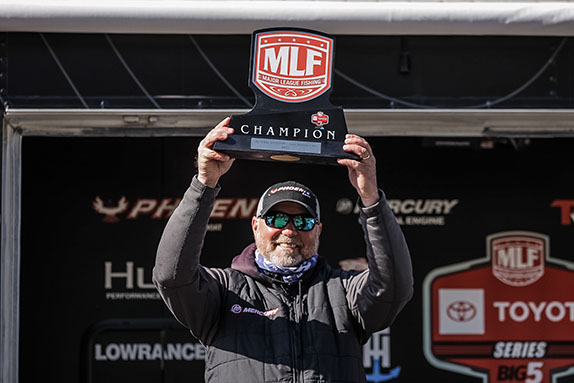 Adam Wagner brought a five-bass limit to the scale Friday weighing 16-10 to win the three-day Dale Hollow Lake Central Toyota Series in Byrdstown, Tenn. Wagner’s three-day total of 53-11 earned him the victory by a whopping 10-12 margin over 2nd-place angler Brandon Cline garnered him the top payout of $86,575, including the $35,000 Phoenix MLF BIG5 contingency award.

“It was pretty awesome being able to lead wire-to-wire,” Wagner said of his most recent of 16 career wins in MLF competition – four on Dale Hollow. “My win last year [on Dale Hollow Lake] was really awesome, too. That was one of my favorite wins because of the way I found them and the comeback, but this one is pretty special, too.”

His performance adds another Top-10 finish to Wagner’s résumé, bringing his total to 70 in the last 20 years.

“I was rattled coming into the final day because I only had five bites on day 2,” he said. “I had one area that I had saved that I thought I could go in and catch five. I saved it for today and they bit really good. I caught all my fish in that one area.

“[On day 2] I pulled into that area I was saving, and I almost fished it, but I’m really glad I didn’t.”

Wagner weighed in 10-13 less on Thursday than he did on Wednesday, and said he was certain his lead would evaporate by the end of the day-2 weigh-in. However, nearly everyone struggled that day due to a cold front that moved Dale Hollow’s impressive bass population off the bank.

Wagner said he knew he’d need to at least catch a limit in the final round to contend for the victory, so he picked up his flipping stick, as he had done all week, and went up shallow.

“I caught every fish in this tournament on a Big Bite Baits Craw Tube in watermelon red, flipping dirt-shallow near run-ins on Wednesday with the rain, and off the bank a little more on Thursday as the cold front pushed fish further from their future beds,” said Wagner.

A second day of cold, sunny conditions moved those same fish back up ultra-shallow on day 4 and Wagner said he was ready for them, bringing in a 16-10 bag on a day when Bass Pro Tour angler Bryan Thrift was the only other pro to weigh in a limit.

Wagner said confidence is what made all the difference in this tournament.

“I don’t know what to say about it,” he said. “It’s just a confidence thing – I’ve done this for so long – I just have confidence in everything I do.”