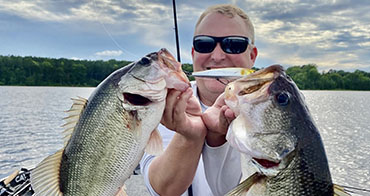 Oh, the summer heat in North Carolina! I wish I was up north fishing for smallmouth.

When it gets hot, many fish on our larger reservoirs head to the creek and river ledges to escape the heat and take advantage of the edge that channels create.

Which lures are effective in these conditions? Big worms, big crankbaits, big swimbaits. Large traditional lures work wonders on hungry, feeding fish – until they don't. That’s what leads anglers to experiment with big spoons, hair jigs and spinnerbaits, among a host of other things.

Those lures are mainstays for summer off-shore fishing and always will be. What could we try next? What is the best bait for getting reaction bites and triggering a feeding frenzy? Which bait has the most erratic action? The jerkbait!

Most jerkbaits dive less than 10 feet, but the good news is that many of the best offshore places are not actually that deep often less. It's a common misconception among many anglers that offshore equates with "deep." Deep is also relative – sometimes 5 feet is deep and sometimes 20 feet is shallow when you’ve been catching them in 40.

The jerkbait has the most erratic action of all lures. If you're really having trouble getting fish to react, it is time to experiment with a jerkbait in the summer.

I've been doing just that and with very good results. Of course it's not the end-all lure for summer fishing, nothing is, but instead a great tool when you need it.

Jerkbaits are a mainstay for smallmouth all summer long, but not too heavily on the radar in the South.

Largemouth in the South have feeding periods during the day, but we don’t have fishing periods, so we gotta catch them. If you know fish are there and the traditional lures are not getting reactions, try the jerkbait.

My favorite jerkbait is quickly becoming the just-released redesigned Duel Hardcore Minnow Flat SP 110 and the bigger 130 size that's deadly on the biggies. There are some smaller sizes as well that I can’t wait to unleash on some smallies. I’ve had prototypes for some time now. They cast so far and have the best flash of any jerkbait I’ve used. I’ve been hammering them on the metallic ayu color as it has huge flash in the water. If it was crystal clear, I might tone it down, but a couple of feet of visibility it is perfect.

I was out testing this lure is when I discovered its potential. I’ve had success with a jerkbait in warm water on largemouth before, but it was always in what I would call tough-bite tournaments, when weights were low and you were just scraping for everything you were worth to get five in the boat.

Testing the new Hardcore Minnow outside of the traditional winter/early spring period forced me to try something out of the norm, and it has earned a spot in my summer arsenal for largemouth.

I’ve found when the fishing is a little tough because the water has gotten a bit clearer is prime time for this bait. Water in the 6- to 10-foot zone is perfect. I actually want it just above the fish, which also gives the fish a different look than all the other bottom-contact lures of summer. Many of the best spots for me are in this depth range offshore.

I use 14-pound Yo-Zuri Top Knot fluorocarbon most of the time and will get about 6 feet down. If I switch to 10-pound I can hit 8. The limiting factor on the jerkbait is stumps – they will hang up, so they're better just above them or on cleaner spots with rock or shells, or above brush piles. I've been fishing the jerkbait on my topwater setup with 15-pound Hybrid for water shallower than 6 feet with my rod tip high.

Believe me, it will get those fish fired up – the ultimate in “hunting action."

Will it replace my favorite 10-inch Culprit plum apple worm or my deep crankbaits? Of course not, but it’s a good option when you know the fish are on a spot and they need firing up!

So even though the Canadian border is closed, I can still pretend my green bass are brown while I’m fishing a jerkbait this summer.