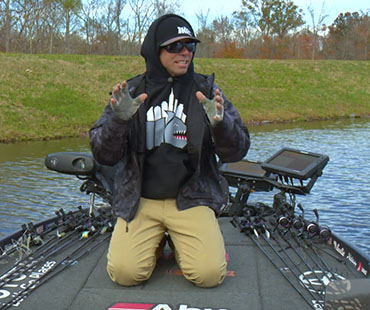 If you look at the deck of Bass University co-founder Mike Iaconelli’s Bass Cat at just about any time of year, you’re likely to see at least a dozen rods. That doesn’t mean they’re the same rods all year long. Indeed, he rotates in season-specific and fishery-specific choices all the time, but when it comes to the coldest part of the year, there are 12 choices that get the call more often than not.

He’ll start with “coverage lures” because even when it’s cold, they tend to trigger reactions from neutral or negative fish.

The first two on the list are crankbaits. As the water gets colder, he likes a tighter wobble, so when it’s in the 40s the Rapala DT series are often at the top of his list. Most frequently he’ll tie on a DT6 for shallow cranking and a DT10 for anything deeper than that.

Next up is a vibration bait. “They’re thought of as a spring bait only,” Ike said. “That’s baloney.” What he changes this time of year is his retrieve, which he wants to emulate dying baitfish. Accordingly, instead of a straight chunk and wind, he’ll spend a lot of time yo-yoing the lure.

His fourth choice is a single swimbait, and he utilizes several styles, but a
a slow-rolled boot-tail is a remarkably versatile choice for those just getting started.

If one swimbait isn’t enough (and your local regulations allow it), an umbrella rig “can be deadly.” There are a lot of times, Ike said, when nothing else gets bites but the multi-armed rig will fill the boat.

He doesn’t leave home without jigs at any time of the year, but they are particularly crucial in the winter. When it’s cold, he’ll stick with something compact, an easy meal.

Numbers 7 and 8 are suspending jerkbaits. As with his crankbaits, Ike said “I always have two rigged.” For example, he might utilize both a deep and shallow Shadow Rap. The key this time of year is to slow down your cadence: “The colder the water, the longer the pause.”

His last four staples are all finesse lures, starting with a dropshot, which allows him to keep a lure in place and wiggling enticingly whether he’s fishing 2 feet deep or 40 feet deep. Selection number 10 is a shaky-head – a light jighead, almost always with a straight-tailed worm on the back – “fished as slow as I can on the bottom.”

Next up is a finesse swimbait, usually smaller than 4-inches, frequently fished on a 1/8-ounce VMC mushroom head. It catches fish all across the country because “it’s as natural as you can get in cold, clear water.”

With 11 choices identified, Ike tells his fans, “I saved the best for last.”

Choice number 12 is a micro-jig, a 1/16-, 1/8- or 3/16-ounce little brother to a regular skirted jig, with a matching trailer on the back. It mimics tiny crawfish or bugs, and pros on tour haven’t been quick to reveal just how deadly this little tool can be. You’ll have to “put away the baitcaster,” but nevertheless he advises that you should still put it around the same cover where you’d fish your bigger jigs.

If you want to learn some of the additional elements of Ike’s wintertime fishing excellence, including the reasons that he never takes his eyes off of his temperature gauge, check out his full video, available only by subscribing to The Bass University TV.