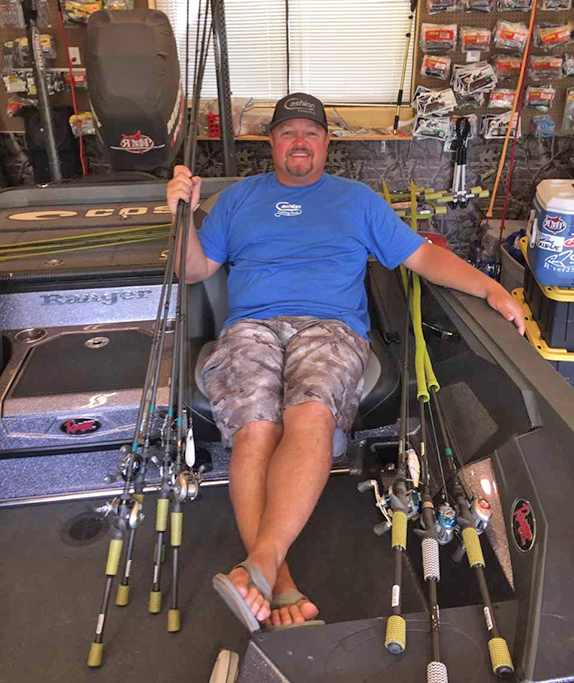 “Adding James Watson to the Cashion Family from the angler side is a no brainer but we are most proud to have him represent us with the manner in
which he conducts himself as a veteran and in the benevolence side of his charity and community service contributions," said Dr. Matthew Cashion, founder and president of Cashion Fishing Rods. "James is a giver and does not take for granted his public position as a professional angler.”

Watson was paired with Paul Benson, Cashion's vice president, at a Bassmaster Open three years ago and a friendship sprouted from that tournament day.

“We are really excited to bring James on board for 2019," Benson said. "His energy and enthusiasm stand out and we feel his ability to connect to anglers on all levels will be key. James takes pride in what he does on and off the water and we feel he will add a lot to the family atmosphere we have created here at Cashion Fishing Rods. We look forward to his new ideas and input with products will we be introducing early next year.

"Having known James for a while, the first thing we noticed is that he offers all his sponsors is his unbelievable work ethic. James is the first one in and last one out at almost every show we have worked together. He finds a way to make time for all the folks he represents and even some for companies he just considers friends. His knowledge base of the business side of the industry is invaluable and he truly understands what it takes to help a company grow and increase sales year over year. James is always a team player and his positivity and leadership style lends to help others in our organization grow and become a better tighter knit family."

Watson, an Army veteran, has qualified for the Bassmaster Classic, Forrest Wood Cup and Toyota Texas Bass Classic. He was honored this year for his philanthropic work with the Shriners Hospital for Children with the FLW Sportsman and Community Leadership Award.

"Matthew and Paul are great people," he said. "Cashion's business model is one that I believe in and want to be involved with. As a professional angler my future direction must be with companies that I have influence and input with.”