U.S. Open gets under way today 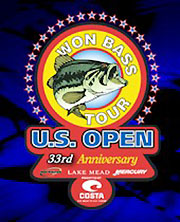 For the 33rd time, the WON Bass U.S. Open will be contested on the waters of Lake Mead starting today. For the fourth straight year, the Costa Live Show will bring all the action of the most prestigious tournament in the West on WONBass.com.

A field of 168 pros and an equal number of co-anglers will compete in the 3-day event out of Callville Bay Marina. The field will be without several stalwart competitors, including two-time winner John Murray, three-time champion Aaron Martens and three-time winner and defending champion Clifford Pirch. Those and several other perennial contenders are competing in the Bassmaster AOY Championship this week.

Tournament takeoff will be at 5:45 a.m. PST each day, with daily weigh-ins starting at 2 p.m. Following the event's conclusion on Wednesday, a champion will be crowned at Boulder Station Casino the final evening of the event and awarded the keys to a 2015 Nitro Z8 Boat and Mercury ProXS 200 outboard.

Daily event coverage will begin following tournament takeoff with hourly updates at 9 a.m. each day, followed by weigh-in coverage beginning at 2 p.m. and a postgame show at 7.