I started out with the swimbait again, and it didn't work. I had a limit by about 7:30, but I didn't get a bite on it the rest of the day.

We went and started flipping back in the keys, and my partner (Johnny Graham of Oklahoma) caught an 11-03 and a 5-pounder doing that. Then we went back to the main lake and I fished a finesse worm and caught 15 to 20 keepers. They were all 3- and 4-pounders.

We watched a guide boat catch 30 or 40 off one of my best spots. They caught so many that they ran out of minnows.

I ended up catching 25 keepers or so, so it was a good day numbers-wise. I just didn't get any monsters – the biggest was about 6 pounds.

It was flat-calm where I was, and that hurt my swimbait bite. I'll see what the weather's doing before I decide where to start tomorrow.

I made the cut, so the pressure's off now and I can swing for the fences a little easier. Hopefully I can catch some more tomorrow.

This was one of the best tournament days I've ever had. I don't think I've ever caught so many 3-pounders in 1 day. It's just prime time right now and we really hit it right.

I probably caught 40 keepers, and my biggest was around 6 pounds. I pretty much threw a swimbait all day. I caught a few on a dropshot, but nothing that would help me.

The morning was best – that's when I caught pretty much all my weight. I made the last cull at about noon

I should only need about 14 or 15 pounds to make the cut, so I'll get the big swimbait out and go for big ones. Nobody else was on my best spot today, and hopefully I'll have some places to myself tomorrow. 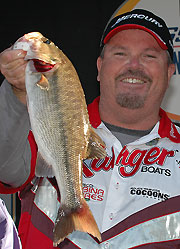 My first practice day was pretty awesome. It was cloudy and rainy and overall I got about 50 or 60 bites. I didn't set on a lot of them, but I saw a few, and they were mostly in the 3- to 4-pound range.

I came in early on the second day (due to the wind), so today I went and checked out another arm, and I caught some 4- and 5-pounders. (The weather's) gotten stable and the fish seem like they're ready to bite.

I'll probably throw a swimbait a lot (on day 1). I'm figuring I can get 10 to 15 bites a day, and some of those are bound to be good ones. If it gets real slick and calm, I might go with a little dropshot rig.

It's just going to be a matter of getting the big bites.