Both days I pretty much threw a Senko and ChatterBait. Yesterday I hooked a couple good ones that came off. Today I had about the same amount of bites – I just never had a good bite.

I was mostly fishing hydrilla mixed with pads. I was casting and flipping the Senko, and just randomly casting the ChatterBait.

I stayed in Kissimmee – in the same area where I had a couple of good bites in practice. I just couldn't convert. Whenever that happens, you're sort of hurting, and I'm hurting.

I had a couple sight-fish spotted in practice, but when I got there they were already gone. Somebody had already plucked them, and I didn't go looking anymore.

I definitely had an opportunity to do well yesterday – I had two or three good ones bite. When you're in Florida, you're just looking for those one or two good bites throughout the tournament. If you can put them in the boat, you're golden. If you don't, well, you know.

And I got lucky today. My battery went dead with 5 minutes left, and Terry Butcher brought me in. Otherwise I wouldn't have weighed anything today. He was the last boat on the horizon. I had a jumper box aboard, but it didn't do it. Benny Matsubu took me back out to my boat with big jumper cables. 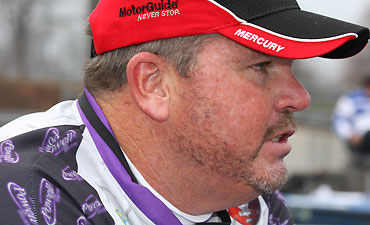 There are not many fish anywhere for me right now, except little tiny bass. I've been catching a lot of little ones, but that's it.

It's pretty frustrating. I always thought March would be better fishing, but I've had better luck here during January and February. I think that's because the fish are more broken up now. When it's cold, you know they're probably under the mats. Now they're really spread out.

What I'm going to do tomorrow is pick my best spot and just try to get five. Then I'll go to where I caught my biggest fish in practice and try to work them out.

I've caught fish on toads, spinnerbaits and worms this week. I haven't really found the bait to catch them yet. You can catch something on just about anything you throw – you just don't catch many. But somebody's going to get on them somewhere.