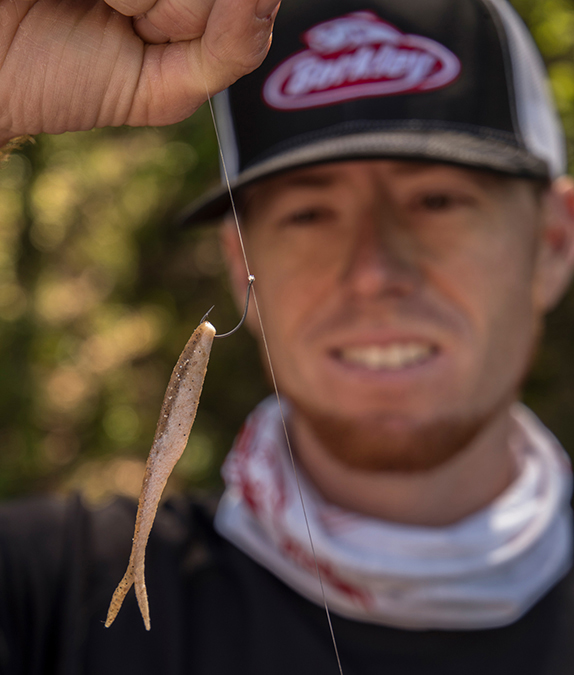 By Steve Quinn
Special to BassFan

Humans striving for better products is one of the cornerstones of our nature. Few realms of human endeavor can match the ingenuity of fishing lure designers in the constant quest to improve artificial baits to catch more fish.

In recent decades, scientific principles and experimentation have been applied to this search, not surprising considering the technological breakthroughs of the modern era. Some of the latest and most advanced work has involved testing bass and other species to find substances that attract them or stimulate them to feed.

After early research on marine gamefish showed promise, Berkley hired Keith Jones in 1985. Jones earned his Ph.D in fish olfaction at Texas A&M University and he immediately began testing trout and bass in a lab to define their flavor preferences.

His research led to Berkley’s 1989 release of PowerBait, which represented a breakthrough in flavor delivery. Its promise was fulfilled as anglers enjoyed incredible catches on Power Worms, Power Lizards, Power Hawgs, Tubes, and many other lure styles, all containing the powerful artificial formulas that had been found to cause bass to engulf and eventually swallow them.

Biological Facts of Flavor and Scent

As a bass breathes or swims, water passes through its pair of nostrils and over its olfactory organs. In water, bass are surrounded by the smells of baitfish, invertebrates, and other fish, as well as countless other chemicals. The bass brain must sort out all these smells, disregarding those that don’t signal food, danger, or pheromones that help them communicate among themselves. Bass can sense very low odor concentrations and follow them to a source.

“Like us, bass have taste buds in their mouth," said Jones, who headed up Berkley’s biological lab prior to his recent retirement. "But while our tongue does the tasting for us, bass have taste buds throughout the mouth area and even on their gills. In fish, both the senses of taste and smell detect waterborne chemicals, so to the two senses work together for feeding. The attractants we used are made up of amino acids that easily bind to the receptor sites in the taste buds.

“We’ve studied their brains, and see a big flurry of nerve discharges when bass detect these attractive chemicals.”

Further research and product development at Berkley’s lab led to the release of Gulp!, a water-based polymer rather than an oil-based material like PowerBait and most softbaits on the market. Scents released from Gulp! baits can be detected by fish at substantial distances. And when bass bite them, the attractive flavors automatically trigger them to start the ingestion process.

The latest development in Berkley’s scented and flavored baits is PowerBait MaxScent, a product of biological research at Berkley’s lab and the company’s product development department, headed up by chemist John Prochnow.

“We wanted to incorporate the best of two lure styles – PowerBait and Gulp! – combining them into an exciting new product that’s easy to use and has proven extremely attractive to bass in the lab and our extensive field testing,” Prochnow said. “We wanted a material that offered excellent action underwater, was flexible and durable, had a long shelf life, and was easy to package. It had to remain fishable in the coldest and hottest conditions, and most of all, it had to catch a lot of bass.

“Before his retirement, Jones spent five years working to perfect the flavor formula that goes into PowerBait MaxScent. It’s different from the PowerBait flavor, and even more effective at causing bass to hold onto it.” 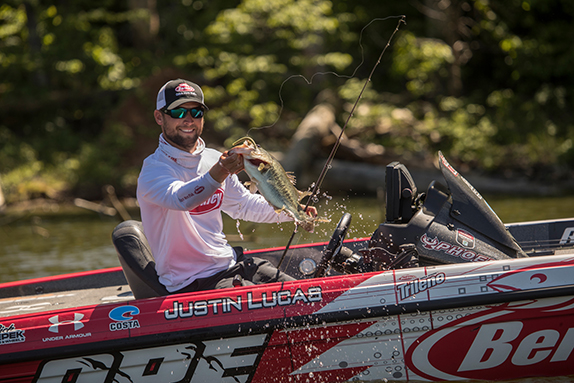 “Moreover, the MaxScent material can soak up attractive water-soluble liquids like Gulp! Alive! liquid,” Prochnow added. “Maxscent is PVC-based to provide action, but made of a matrix that soaks up and holds attractants, then releases them underwater.”

Berkley first released eight shapes for the 2017-18 season, and added more for 2018-19, including the Critter Hawg creature bait and Flat Worm, a 4-inch flat-tailed drop-shot worm, in addition to 4- and 6-inch versions of the popular General stickworm. They’ve already proven deadly on largemouth and smallmouth bass.

Lucas lives near the shores of Lake Guntersville, one of Alabama’s best and most popular reservoirs. He first obtained packs of the 5-inch General, a classic stickworm design infused with the PowerBait MaxScent formula.

“I initially fished MaxScent around Guntersville’s many docks,” Lucas said. “Right away, I could tell something was different, as I rarely missed bites. Bass ate it on the fall and held on. Bass here see a lot of lures and this one outfished them all.”

Lucas found success by wacky-rigging the 5-inch bait on a 1/0 Berkley Fusion 19 dropshot hook, hooking the worm through the middle with no weight.

“Bream and other species are always pecking at it, too, so you know it has an attractive scent,” he adds.

“The new MaxScent additions are great,” he says. “I’ve been a huge fan of the GeneraI and now I use the 4-inch version as an alternate drop-shot lure and fish the big 6-incher around shallow cover whenever there are big bass around. (They) gobble that bait up.”

Bertrand and Lucas are very versatile anglers and rely on a dropshot rig for smallmouth bass and when largemouths turn tough. At the 2018 Lake Oahe Elite Series, they both finished in the top 10 by drop-shotting the PowerBait MaxScent Flat Worm.

“The bite was tough there,” Lucas reports. “I was fishing around a bunch of competitors and we were all drop-shotting. But I was catching a lot more bass than they were, and I have to think the attractive scent and flavors of the MaxScent lures made the difference.”

On tour and at the desert reservoirs back home in Arizona, Bertrand finds great success with 7-inch PowerBait MaxScent worms on shaky-head jigs.

“I use the Flat Worm for finesse bites, and I’ve had great success with the 7-inch MaxScent Magnum Hit Worm on a 1/2-ounce shaky-head jig, working it on reservoir ledges in summer for big largemouths,” he said. “Those fish see a lot of lures, and the action and scent of the Hit Worm are deadly.”