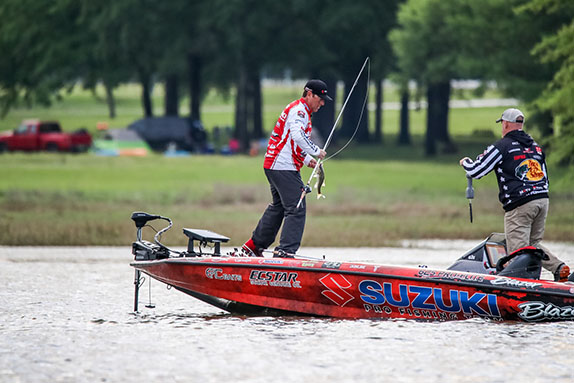 The early portion of the Championship Round was a busy time for Dean Rojas and his boat official.

Dean Rojas had to beat nine anglers in the Championship Round to claim the title at the Smith Lake MLF Bass Pro Tour in Alabama. He defeated eight of them in the first hour of competition.

Propelled by a huge first period, Rojas garnered his first tour-level victory since 2011 with a 30-fish, 47-00 performance on the final day. He logged 23 of those fish for 36-05 in the opening stanza and was never threatened for the remainder of the day.

"It was an awesome day and it's been a long time coming," said Rojas, referring to his last Bassmaster Elite Series win at Toledo Bend Reservoir in 2011. "I've had a lot of near misses since and it feels so good to close the door."

The offshore spotted bass action, which had been improving throughout the event, tapered off dramatically during the Championship Round. Rojas' big morning flurry came via fish busting shad in the shallows and Chapman compiled a lot of his weight by flipping bushes.

The waning shad spawn was a critical component in many anglers' programs throughout the week, but Rojas said the baitfish in morning area may not have been partaking in the reproduction ritual.

"(The bass) had them pinned down, but it didn't look like they were spawning," he said. "They weren't in the bushes or the grass like you usually see when they're spawning – they were just in an area and the bass were going nuts on them.

"It was a spot I found in practice and I went there during (the Shotgun and Elimination rounds). I just wanted to check it today and I went over there during the morning ride-around and they started busting."

He used an array of offerings that included a crankbait, a swim jig, a frog, and a swimbait. His biggest fish of the day was a 2 1/2-pounder.

"I just sat there for the whole (first) period and caught as many as I could. I lost my three biggest bites and I thought that would come back to haunt me, but it turned out that it didn't." 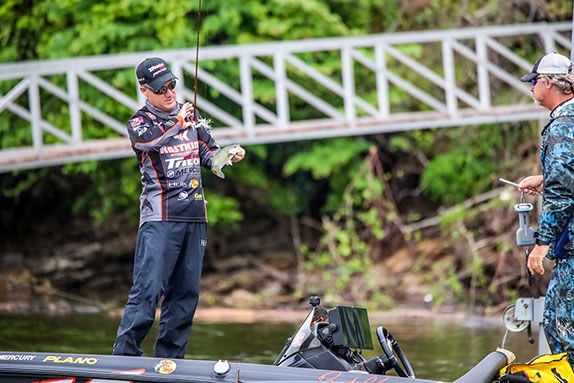 
Brent Chapman was the only angler who caught more weight in the Championship Round than Rojas compiled in the first period.

Chapman's only previous visit to Smith occurred 15 years ago and his expectations coming in weren't of the charts. He finished the derby on a high note, flipping up six fish in the final period, including a 4-10, a 3-14 and a 3-00.

"Honestly, I would've been content just to make a check (top 40)," he said. "You always show up with some wishful thinking, but there were a lot of local favorites in this one and after the first couple days it looked like they were going to be really hard to beat. In an event like this, though, things change over the course of four days and that takes a lot of the local advantage out of it.

"Considering I hadn't been here since 2004, I'm very happy with the outcome."

Neal's notched his third top-10 finish in the five BPT events to date. He spent the vast majority of the tournament fishing steep, bluff-style banks with a Neko rig.

"It was slower for me than it had been," he said. "I don't know if the cloud cover hurt the bite or if I'd just caught too many of them or what. I do know that when the sun was on certain banks, it would position them exactly where I knew they were going to be."

Christie, who'd caught nearly 100 pounds combined over the previous two days in the Knockout Round and Group B Elimination Round, was confronted by a different scenario on the final day.

"With the weather (overcast and balmy), those fish never set up on the deep stuff," he said. "My bites were just random, one here and one there. I knew that was my best chance to win, but they were swimming around chasing bait the whole time.

Faircloth's single-digit finish was his second straight – he was third in the previous event at Lake Chickamauga. He was consistent throughout the week, working a shad-spawn pattern around docks in the morning and then moving offshore when that petered out.

"I'm happy with the finish, but I feel like winning was definitely within my grasp," he said. "When you get that close, you like to win.

"Looking back, I probably should've fished the swim jig around the docks for longer than I did. Based on what I caught offshore, I probably could've done just as well doing that and maybe better."