BACK
Family, AOY Are Priorities

Christie Likely To Narrow Focus In '15 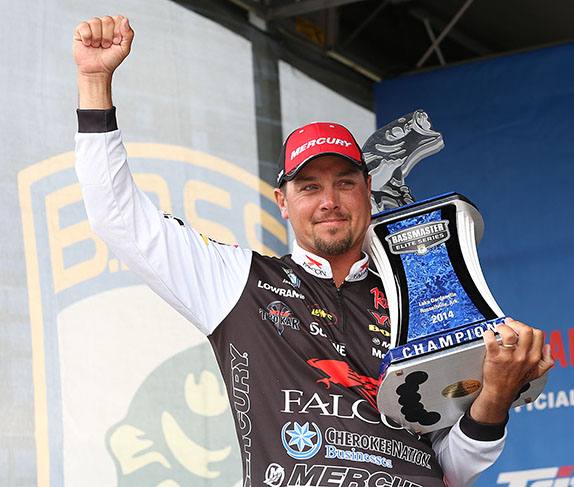 Jason Christie's victory at the Lake Dardanelle Elite Series was the highlight of his two-tour campaign.

Jason Christie has pocketed nearly $360,000 from FLW Tour events over the past 2 seasons, plus another $22,500 from the Forrest Wood Cup. Nonetheless, it's very likely that he'll forego that circuit in 2015 to spend more time with his family and focus his competitive energy on the Bassmaster Elite Series.

"Nothing's for sure yet, but there's a 90-percent chance I'll be fishing the Elite Series, the (Major League Fishing) Selects and one division of the (Bassmaster) Opens," said the Oklahoman who's spending his second straight offseason atop the BassFan World Rankings. "I'll probably jackpot a Rayovac and some other events here and there.

"It's going to be hard because FLW is where my career started and it'll always hold a special place for me. The following year, if the schedules line up right, I'll probably start fishing both again, but everything this year is pointing toward sitting one out. I think I'd be really fighting it trying to fish both.

"If you could fish them both without the schedule being just crazy, I'd do it," he continued. "I think a lot of people would."

Christie was the most consistent of the 14 competitors who fished both major circuits this year, averaging a 30th-place finish across 14 events. He made four final-day appearances (including his victory at the Lake Dardanelle Elite Series) and ended up 6th in the FLW Tour Angler of the Year (AOY) race and 15th on the Elite side.

This year's schedule wasn't any easier than next year's in terms of events stacked on top of one another in the spring, but there's a big hitch in 2015 – the Elite Series' first visit to the West since 2010. Back-to-back derbies at the Sacramento River in California and Lake Havasu in Arizona are sandwiched directly between the FLW Tour stops at Beaver Lake (Arkansas) and Lake Eufaula (Alabama).

With three athletically active daughters at home (the oldest is a sophomore in high school and the youngest is in 3rd grade), Christie has become increasingly unwilling to spend the bulk of the year on the road.

"I want to be around more for them," he said. "For me, the longest days on the water are practice days when my wife calls and tells me one of the kids hit a home run or made a key basket or something like that. It's not as bad when it happens on a tournament day, but in practice it makes for hard times.

"Another key thing is my dad and I fished a lot when I was growing up, but since I started fishing professionally he's pretty much given it up. He's due to retire real soon and I want to spend some time fishing and hunting with him." 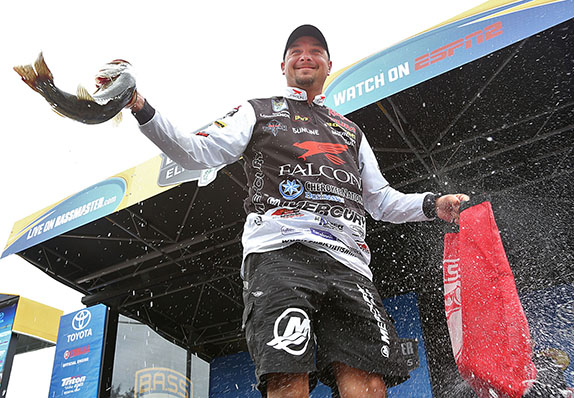 
After finishing 15th in the Elite Series points this year, Christie hopes to make a stronger run at the Angler of the Year title in 2015.

From a professional perspective, winning an Elite Series AOY has become his primary goal. Had Greg Hackney not done it last year, he wouldn't have believed it was possible while fishing both tours.

"He proved me wrong about that, but to me, it's hard to stay up for that many tournaments. I want to take this next year and focus on one tour and prepare for each event instead of just showing up on the first day of practice and going fishing. It might not work and I might find out that the other way is best.

"If you look back at my career, as the year goes on, I usually have a poor finish or two in the late summer (he was a season-worst 77th at Cayuga Lake this year). I like fishing in the late summer and I've had some good finishes, but I think you lose a little bit of that edge you had in the spring when you're all fired up to get out there. When you fish as much as I have the last 2 years, I think it sets you up to get burned out."

Christie didn't arrive at his near-certain decision to scale back his schedule on his own.

"I talked it over with my wife and she wanted me to do whatever I felt like I needed to do, but deep down I know she's happy with it," he said. "I also talked it over with my sponsors and all of them are good with it, so that makes me feel good. The last few years I felt like I sacrificed quite a bit to put myself out there and fish as much as I did.

"I don't want to use the term 'slacking off,' but I think I need to trim it down a little bit so I can focus more and try to get rid of those one or two poor finishes per year."

Next year's Classic will take place at South Carolina's Lake Hartwell, which was the site of his first tour-level victory in 2011. A win there would make the season an instant success.

"The Classic and the Angler of the Year are at the top of my list now. Winning (regular-season) tournaments is awesome and I've never experienced anything else like it, but those two things are why we do what we do.

"As far as our families sacrificing, that's what it's all about."

> Having a boat for each tour and flying between stops to cut down on travel time is not an option Christie is willing to undertake in order to fish both circuits. "It's hard enough to organize and maintain one boat, much less two," he said.