BACK
Thirst For Info 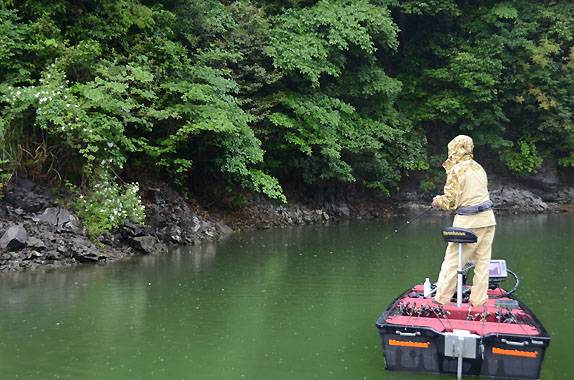 A typical Japanese tournament boat is a fraction of the size of the ones used in high-level U.S. competition.

Despite the many negative factors limiting the expansion of Japanese bass tournaments, there remains a thirst in the Japanese fishing community for more information and greater advances. Oddly enough, Manabu Kurita’s world record-tying largemouth catch in 2009 might’ve inspired the bass angling community outside of Japan more than within the country itself.

“Japanese anglers in general are resistant to catching bass on live bait,” said Kenshi Kuroda, one of the top anglers on Japan's JB Top 50 Series. “At the same time, the world-record catch also brought attention to Japan and all of the anglers who fish Lake Biwa now are in the mindset of potentially catching the next world record, and doing it on an artificial lure.”

In a fishing environment dominated by finesse techniques both historically and currently, Kurita’s catch has also shifted the tackle paradigm somewhat. There had been a temporary big-bait boom, but Kuroda said it had been slowed in recent years. The world record catch “made more anglers throw big baits and also created an even larger giant big-bait category to specifically target the next world record. So overall there were more positive impressions than negatives from Mr. Kurita’s catch.”

The other technological advance that has greatly impacted the Japanese angling landscape is one that has affected anglers worldwide: the Internet.

“Now we follow the U.S. tournament scene on YouTube and we can receive live updates and footage on Twitter and Facebook, creating buzz,” Kuroda explained. “Attention to American angling has increased every year since 2010. Before only two of our Japanese bass magazines had articles about the Bassmaster Classic and ICAST. Now all four do.

"All of the Japanese pros secretly use the winning lures from the Elite Series, but if they win a tournament on an American lure, that will never be published."

Kenichi Iida, a former Shimano employee who now works for Megabass USA, agreed that through his time in the fishing industry he’s seen a shift to where “U.S. anglers’ dynamics are the largest influence on the Japanese bass market. Popular techniques from America such as punching and big baits have had booms in Japan, and that increased consumer demand is a direct result of information received over the Internet. “

Despite the wealth of information flowing both east-to-west and west-to-east, the Megabass pros who traveled to Japan were still awed by what they encountered on Biwa. Some of their prior impressions were confirmed, while others were shattered.

In the former category, all noted that the reputation for crowded water is earned.

“I’ve always read about the pressured lakes of Japan, but I really had no clue,” Chris Zaldain said. “In terms of the sheer number of anglers, it was like the Monkey Box on Okeechobee, with hundreds and hundreds of boats out there. It was crazy with all of the locals out there dead serious, fun-fishing with the wind blowing 25 to 30 miles per hour, knowing that the next cast could be a 20-pounder.”

Both Zaldain and Edwin Evers compared Biwa’s grassy flats and overall diversity to California's Clear Lake, although Evers expected something much smaller. 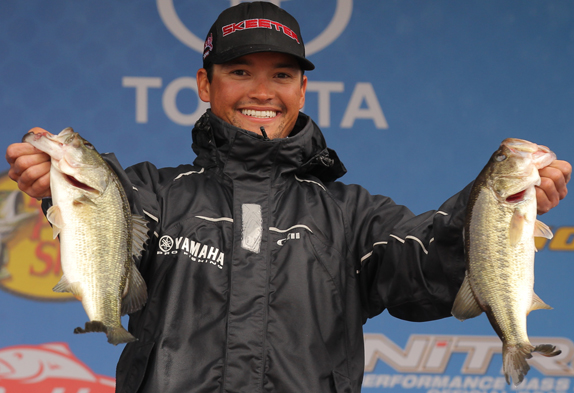 
Bassmaster Elite Series angler Chris Zaldain was surprised by the sheer number of anglers he encountered on the water on a recent trip to Japan.

“I had no idea it was going to be that big or look that great,” he said. “It was chock full of grass, like Rayburn without the timber, or maybe Toho.”

Martens, who’d been to Japan before, likewise expected the lake to resemble something more out of his Southern California childhood than the lakes he experienced as his pro career evolved.

“I thought there would be more rock and sharp contours,” he said. “I didn’t realize that it would be so big and shallow. It had hydrilla, milfoil, peppergrass and cabbage, kind of like Okeechobee.”

He wasn’t surprised by the crowds, though, which he compared to those “you’d see on Guntersville in March and April.”

More than One Option

Realizing that the power-fishing opportunities were greater than he anticipated, Martens said that it was the diversity of angling that appealed to him most. Despite Fukae’s admonition that it would be tough for most American pros to adapt quickly, Martens said that the chance to crank with 12- or 14-pound line and then switch over to 5-pound test and a dropshot fit right in his wheelhouse.

He’d likely have to deal with extensive crowds, though. The reigning Elite Series Angler of the Year was consistently mobbed throughout the pros’ stay.

“I signed a lot of T-shirts and lures. They all wanted pictures and I signed quite a few Bassmaster magazines with my picture on them. They couldn’t all talk English, but they’d give you the peace sign or hang loose, West Coast-style mannerisms. That’s why I fit in.”

Luke Clausen said the trip made him realize that the differences between the two cultures’ appreciation for tournament angling are fewer than their similarities.

“It was neat to see how into it the fans were,” he said. “Biwa was like being in Alabama, Louisiana or Georgia. Everybody there knows about it and follows it, just in another language.”