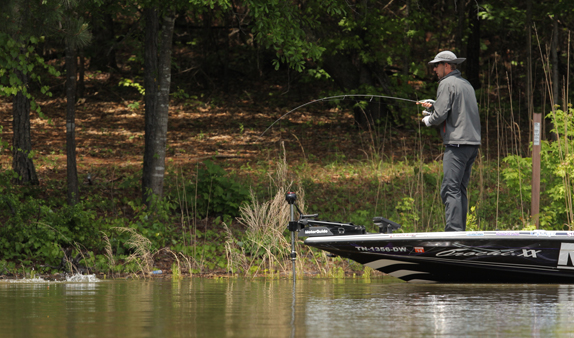 Aaron Martens said his fish were keyed in on shad.

West Point Lake was a different (and more difficult) animal this time around.

Those who came to the Chattahoochee River impoundment thinking Steve Kennedy's winning swimbait recipe from 2011 was going to result in a similar outcome for them were sorely mistaken.

The fish seemed to be in a different phase of their seasonal patterns and the water had risen significantly since the Elite Series last visited 2 years ago. The result was 100 pro anglers scratching their heads for 4 days trying to figure out how to catch the best fish possible.

While some did offer up oversized baitfish imitations, whether in practice or as a big-fish bait during the event, it was hardly the main component to any pattern. Conditions just never were ideal for it. The water was somewhat stained after coming up pretty swiftly prior to the event, flooding countless acres of shoreline vegetation that had sprouted up while the lake had been down for a couple years.

A good majority of bass were coming off their spawning routine and were in a funky mood most of the week, so it took a variety of tactics to trigger bites. A number of anglers, including several top finishers, went with a topwater popper plug to score bites from fish stalking shad or submerged vegetation. Others employed more finesse-type techniques to get some sluggish fish to snap.

Here's how those who trailed Skeet Reese in the standings went about their work.

Aaron Martens made two separate trips to West Point prior to it going off limits to competitors on April 1. While there was no way for him to anticipate the weather patterns that would develop between then and tournament time, he was able to drive around and read his electronics and mark potential fish-holding areas.

Even though he'd fished there in 2011, he said he's more comfortable when having scouted a body of water instead of showing up blind for practice. When he arrived for official practice, he figured there would still be some fish spawning, but high water made some of the nests hard to see.

"I was focused on bed-fishing if I could find enough of them," he said after notching his 11th career runner-up finish in B.A.S.S. competition. "I didn't know it was going to be as cloudy as it was. It was like pre-dawn cloudy all week. It was weird. That made it much tougher. More sun would've made it better. The weights would've been a few pounds higher, I think."

He tried to unlock a topwater bite in practice, but had more success fishing a soft jerkbait rigged weightless. He also caught keepers on a shaky-head, keying on points and shoals and the backs of shallow pockets and creeks where schools of shad congregated.

"They were definitely keying on shad," he said. "You couldn't see them really good, but the shad were spawning before it got cloudy and cool. That's one the reasons the fishing would've been better. When the sun went away, I think the shad backed off and the bass just backed off with them.

"I was seeing a lot of shad in 3 to 4 feet of water right on the grass line and some fry guarders would come out and nail the shad here and there. That's what tipped me off to it."

> He tied on the glimmer blue under cloudy conditions and broke out the mardi gras or watermelon version when the clouds parted. He also dipped the flukes in JJ's Magic Dye, which he thinks triggered some bites.

> Main factor in his success – "I made a couple scouting trips there. I went there one day last December and spent two half-days there right before off limits. It seems like most of the time I pre-practice, I do pretty well."

> Performance edge – "My Roboworms. I caught a few key fish on the shaky-head during the tournament." 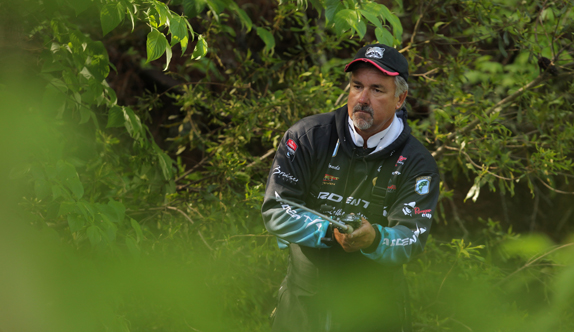 
Pete Ponds resorted to a spinnerbait on day 4 after his topwater bite fizzled out.

The topwater bite at West Point played into the hands of Pete Ponds, who grew up throwing a popper bait to catch schooling fish.

"I love to throw a popper even though it's not usually a big-fish bait," he said. "But because the weights were so low last week, I was able to utilize it. Being able to throw it was cool because I had a lot of confidence in it. Normally, though, a bait like that isn't going to get it done on the Elite Series. It might catch you a limit here or there, but it's just not a big-fish bait."

Coming off a dismal practice, he entered the event unsure if he'd be able to bag a keeper, let alone a limit. He'd discovered an old waterfall/drain where an old lake emptied into West Point and that was the only area he had confidence in. He wasn't on a shad spawn pattern and couldn't locate enough bedding fish to last him the event.

"Takahiro Omori had told me he'd been catching them on a Pop-R, so I tried it and got some bites," he said. "I caught two spots on day 1 and went back to throwing the Pop-R and caught a key fish. Once I got that bite, I stuck with it. It was probably the key bite that helped me in the tournament."

His topwater bite didn't fire on day 4 so he transitioned to a spinnerbait.

"One thing that keyed me in on the waterfall bite was I'd caught a striped bass in there and it was spitting up threadfin shad," he said. "When I saw that, I matched the blades on my spinnerbait to the size of the shad it was spitting up."

Boat position was also a key factor for the Mississippi native.

"My fish came from what I think was a post-spawn deal," he said. "I could catch them where you'd position your boat if you were fishing the bank. I had noticed a competitor of mine was in tight to the bank on the first day and he only weighed three fish so that clued me in that I had to stay off the bank. Mentally, it was a challenge all week because I was only getting about seven or eight bites a day."

> While most of his competitors were throwing newer, pricey popper-style baits, he dug out a Pop-R that he estimates he's caught 300 bass on. "It's got teeth marks all over it," he said. "The paint's all worn off, but I put new hooks on it and it worked just fine."

> On day 4, he caught several of his weigh fish on a 1/2-ounce Talon spinnerbait in a shad pattern with a willow-leaf blade.

> Main factor in his success – "Persistence and sticking to it mentally. Sticking with a lure I knew would work was key."

> Performance edge – "My HydroWave was very important for me. I believe strongly in it. I had it on shad/continuous play and I really believe that masked the trolling motor noise and depth finder noise and the fish relate that to eating." 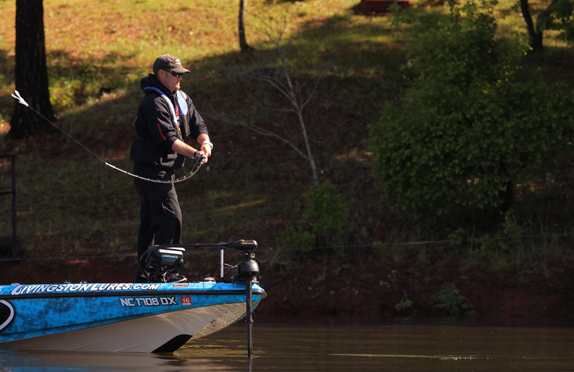 Hank Cherry came to West Point with a bit confidence simply because of the time of year – he loves fishing post-spawners in the spring.

"I knew I wouldn't be throwing worms or dragging something around slowly," he said. "I tried to practice differently from a lot of other guys and sometimes when you do that, it gives you an advantage."

He caught a few fish in practice swimming a jig and tried to get on a swimbait bite, but "they'd just come up and slap it and not eat it," he said. "I went to the jerkbait and they started to bite it better."

His pattern consisted of following schools of bait fish around points.

"All I was keying on were balls of shad on my depth finder," he said. "I'd pull up on points and when I saw them, I'd back off and start fishing. There wasn't much of a shad spawn because I think all the rain dropped the water temperature and knocked the shad back a little."

His tournament was bookended by two 10-plus pound stringers while averaging about 9 pounds between days 2 and 3. A culling error on day 2 cost him about 1 1/2 pounds, but it ultimately didn't affect his final position.

The depths from which his fish came from varied, depending on how the shad were bunched up.

> He'd throw the Livingston Lures jerkbait when fishing shallow, switch to a Megabass Ito Vision 110 when fishing deeper water and throw a Lucky Craft Pointer when working over shoals. All had a pearl blue/chartreuse shad color pattern.

> He also trimmed his jig with a Zoom Super Chunk, but threw the Air Craw trailer around bushes.

> Main factor in his success – "Not taking the temptation to go to the bank and staying out and doing what I know how to do."

> Performance edge – "I really think that HydroWave played a big part in catching fish. On the second morning, I had it off for the first hour and the fishing was slow. I went back through those places with bait in it and cranked it up and it made a big difference." 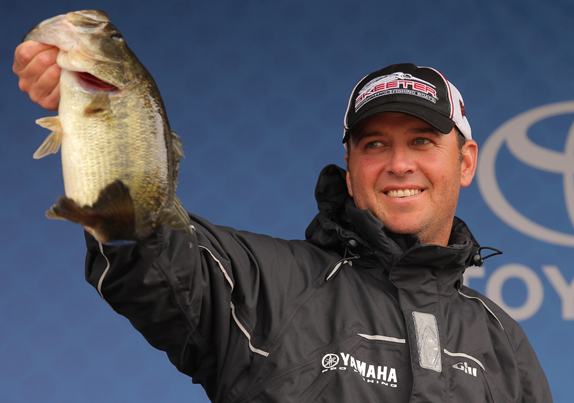 
A big effort on day 3 put Todd Faircloth into contention.

Todd Faircloth finished 64th at West Point 2 years so he was anxious to see if the swimbait pattern would be the deal again this year. It wasn't to be last week.

"I pushed the swimbait deal and the topwater deal on the shoals," he said. "But there was just a little bit of a shad spawn going on. It wasn't full-blown like it was last time we were here. It just seems like everywhere we've been this year has been just a little behind with this extended spring we're having. I think a lot of fish are done spawning at West Point, but I also tend to think there will be another wave of them coming up."

He fished a soft-plastic stickbait mostly and mixed in a jerkbait and a topwater popper, which is how he bagged the 15 pounds on Saturday.

"I was targeting the brown grass or the deepest grass I could find in the pockets," he said. "When they pulled the water real hard, I think it sucked the fish out to the last grass that was out there. Some of the grass was submerged, some of it stuck through the surface. I wasn't catching a whole lot of them doing that, but I caught some big ones. I had a few more miss it that were good ones. I felt like the potential was there (on day 4) to catch another big bag, but they just wouldn't come up on it."

When he focused on key isolated stretches, he'd slow down and pick up the stickbait or jerkbait.

Having plenty of areas to fish was another key because the action wasn't fast and furious.

"That lake is not a lake where you can put the trolling motor down and fish an area and feel like if you just fish it, you're going to catch them," he said. "I might've fished a whole pocket and got one bite and then go to the next one and not get a bite and then get two out of the next one. It was real sporadic."

> Performance edge – "My Lowrance unit was a big key. I was running new water every day and looking at my Navionics/Lowrance mapping for those flatter pockets which is where I caught some of my bigger fish."