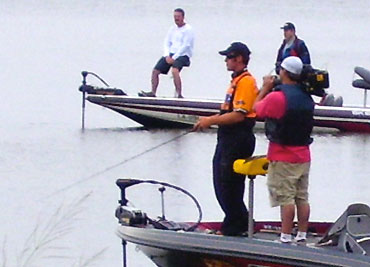 Jacob Wheeler researched local events and determined a certain area of the lake likely had a large amount of big release-fish in it.

BassFans, in a previously published story about 2011 BFL All-American champ Jacob Wheeler, learned that the 20-year-old angler from Indianapolis fished from a borrowed boat as he worked his way up the BFL ladder. And they learned that it's always been his dream to fish the Forrest Wood Cup and the FLW Tour.

is a look at Wheeler's winning pattern from the All-American, and how he blew away the field by 9 pounds.

Cross Lake is a slot lake, and competitors are allowed to weigh a maximum of four overs and one under.

Wheeler didn't skimp on practice. He spent 3 days there in April, "just to see what it had to offer," and rode around and spent time in the creeks and cuts trying to learn them.

"I took as much info as I could and wrote it all down," he said.

He returned for more practice prior to the cutoff – this time for 7 days. He fished from daylight until dark every day and developed a Pop-R topwater pattern around cypress trees. At the same time, he learned more about local tournaments on the lake and where they launched from.

"I felt like I had a good understanding of how the lake laid out," he said. "I did a lot of research and I knew a Top 5 would come out of an area where they run a Thursday-night tournament every other week. They have about 80 boats in that tournament every other week, and I was looking at how much it was taking to win. Historically in April it took 20 pounds to win, but guys were catching 10 pounds all the way down to 50th place. I knew there'd be a lot of overs and unders (released) there and put into that area of the lake."

He got some good fish to show themselves on his hookless Pop-R in the area, and also discovered some submerged pipes. He loves river fishing and knew if water was coming out of those pipes during the event, it could be a key element. He never threw a bait there, but made a note.

During the official practice, he ran other stuff but eventually decided to focus on that area that hosted the Thursday-night events.

Wheeler began day-1 at the boat ramp where the Thursday events launched and caught two unders on a Spro Dean Rojas Hydro-Pop, then went to fish the pipes and saw that water was pouring out of them. He set down his Power-Poles, made a cast and yanked a 19-inch over into the boat. Then he switched to a Spro Fat John in cellmate and cranked a 4 1/2-pounder off the pipes. That gave him four fish – two unders and two overs.

He moved on to the next pipe, then the third pipe and threw a tube. A 4-pounder bit then jumped him off. That shook him up for a bit.

"Cross Lake, being a slot lake, is one of those deals where I knew the guy who could keep from losing the big overs was the guy who was going to win," he said. "I went back to the other pipe, fished a little more, slid back down through there and felt a tick-tick – like a bluegill bite. I set the hook and it didn't move at all. There was a boil as big as the hood of a truck – it was a 6 1/2- to 7-pounder and we landed it.

"I was pumped up – I was shaking and couldn't think about anything," he added. "The first day of the All-American and look where I'm at – that kind of weight at 9:00."

He boated one more over from the area, then left to run some docks and cypress near the ranger station. He caught a few that helped slightly on the Fat John and ended the day in 1st with a 7 1/2-pound lead.

He started on the pipes again on day 2 and one pipe wasn't running at all. Another had some outflow. He positioned himself well away from the pipe and caught a 13-inch "perfect under fish" on the Fat John. Next he lost a giant and only caught one more pipe-fish – another 13-incher.

Next he went to the ranger station, which is actually headquarters for a ShareLunker-type program, he said, and caught a 4-pounder off the dock there. He skipped his tube up there again, caught one more, then "ran around and did some other stuff." He only caught five keepers all day. 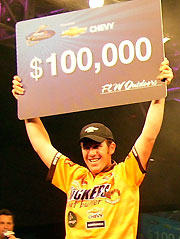 
Wheeler threw his tube with an insider jighead – a presentation he thinks is underfished at Cross Lake.

Day 3 was much different. He had a 9 1/2-pound lead but felt he had to catch five to clinch it. The pipes weren't running at all and he didn't get a bite there. He went fishless at the ranger dock, but thoroughly worked through the area and caught his first fish, an under, off the main ramp dock. That calmed him down, he said.

Then he moved to cypress trees where he'd seen what he thought was shad fry in practice. He threw a Rebel P70 Pop-R with a feather and the fish were there. His first Pop-R fish came unbuttoned, but through the rest of the day was able to cobble together a small limit between the cypress trees and docks and won by a 9-pound margin.

> Around the pipes, he threw the tube on a 7' G. Loomis 743 IMX rod, Pflueger Summit reel and 15-pound Seaguar InvizX.

> His Spro Fat John was the cellmate color pattern.